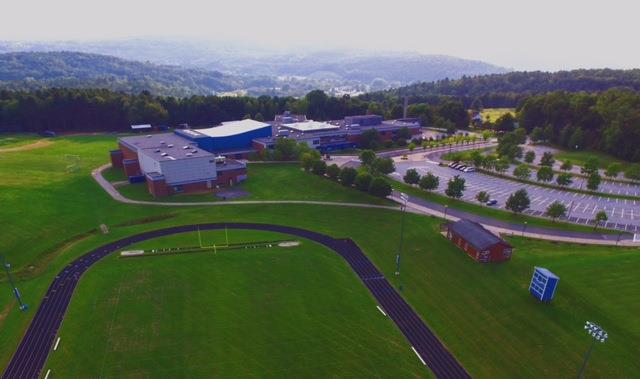 As each month passes, Drew Junkins, a Pre-Calculus and Geometry teacher at U-32, puts another big X on the calendar hanging in the front of his room. Students and teachers alike are counting down the days until summer, the time when they can forget about school work for a few needed months off. 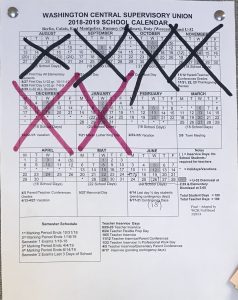 However, as the class of 2020 approaches graduation, a large portion of the junior class is not on track. Students are required to be proficient in all of U-32’s 41 standards. Many students still have multiple B’s (Beginning) or D’s (Developing)- an indication of not meeting expectations- on their graduation transcript.

An example for one standard on a student’s transcript. This student has reached Advanced in the standard, indicated with the blue box containing A on the far right.

Those who are not up to P’s (Proficient) in every standard within the next year, could be facing a fifth year of high school. The administration has proposed a new idea to address this problem: summer school.

Jen Miller Arsenault, WCSU’s Director of Curriculum, Instruction, and Assessment, said that for students who have not yet reached proficiency in certain standards, summer school would give students more flexibility in their schedules.

“What we know is that students do it [learn] in different ways, and it takes them different amounts of time,” she said. “And so time should be a variable. The reality is, right now in high school, time is not super flexible.”

Summer school will be held for 4 weeks in the summer during July. It may also double as a professional learning opportunity for teachers.

Jen acknowledged that this new system is more difficult, but options like summer school could make it more manageable.

“In the old system you could get a D and you passed your class,” she said. “The outcomes are going to be better for kids, but the responsibility is greater for them as well.”

Jen was quick to say that she doesn’t want summer school to be seen as a penalty.

“I want it to be seen as opportunities to achieve proficiency in standards at different paces.”

Eric Scharf, a junior this year, felt that not all students see it that way.

“It is a penalty, it’s hard to put summer school in a light that’s not negative,” he said.

Our implementation of a proficiency-based system has had a bit of a rocky introduction. And now, Scharf says, implications of that decision are coming to light.

“You can’t just sit in the back anymore like you could under the old system. I think that is going to screw a lot of people over.”

Justin Tedeschi, another junior, was quick to share his opinion.

“I would not go. Four weeks is a long time! That’s like half the summer,” he said. “But if I was forced to, I would rather go to summer school than to stay here another year.”

Tedeschi also shared that he wishes that he had been told this information earlier.

“All the proficiency information, all of it. But the fact is, they just didn’t know. They didn’t know until now. So I just blame everything on the state.”

Similar to Tedeschi, many students felt that up until now, there has been no indication that the 41 standards requirement would be strictly enforced.

Nora Dillon, another junior, is concerned about how it is going to affect graduation rates: “We didn’t know the half of this in freshman or sophomore year.”

Dillon guessed that at least a quarter of the class of 2020 would become “super seniors”, a term used by many students to describe students who have to repeat their senior year.

She also shared that many students are trying their best, but it is the system that is dragging them down.

“It’s just that proficiency is so convoluted, and it’s so hard to get a 4  or even a 3. And they [students] try and they try but they get a 2 and now they have to take summer school,” she said. “My opinion is it’s seen as ‘you’re stupid.’ But it’s not, it’s just because proficiency is really hard and confusing.”

A junior’s transcript. Still many standards are at a D (Developing) indicated with the yellow box.

While the timeframe available to get kids to reach proficiency is shrinking every day, and summer school could be a solution, many are also upset that this is the first time they are hearing about it.

It is already February, and many students and families have already made plans as to what they are doing over the summer. For some students, summer is a time when they can earn a little more money, and have a constant job. Preventing summer school from conflicting with prior commitments could be difficult.

Miller-Arsenault said, “You have to consider how many hours over a semester a class is, and then think about how much time we actually have, and how much time kids would stay at school in the summer.”

She thinks maybe only mornings could be feasible, so students could still go to work in the afternoon.

In many places, the summer school day runs from 8 or 8:30 till noon. U-32 will most likely model off this schedule. This allows students to finish school and get to a job or other activity for the rest of the day.

Miller-Arsenault also addressed the idea of which students will be given priority for the limited summer school slots.

“At some point we would have a cap. There are some students who, based on other classes they are taking, just need it more than others.”

U-32 principal Steven Dellinger-Pate said that most likely juniors who are not going to graduate without the class will be prioritized. Juniors who would like to take the class would be next, and if there is still room, sophomores could be enrolled. The goal is for those who need it the most to get priority. Summer school this year will be funded by a grant. Not only will the school have to pay teachers, but a bus system is planned to be in place for students to get to and from school. The amount of students enrolled will not affect the cost.

“Let’s say we offer a health class,” Miller-Arsenault says, “the cost of offering that class is going to be the same whether there are six, or twelve, or twenty-four students enrolled.”

Will summer school be the solution for the class of 2020?

Summer school has potential to be a solution that could work. But given the lack of preparation, the late notice, and the frustration of the student body, there is still uncertainty as to whether this plan will succeed or not.

“In theory, summer school is not a bad thing in my opinion” Scharf said, “but it’s been put in such a negative light, that it’s not anything anybody wants to go to.”