The Year of the Proficiency: 3 Schools, 3 Inconsistencies

Every Thursday afternoon, U-32’s principal, Steven Dellinger Pate, has an open callback for students to discuss the school’s ongoing progress to define what proficiency means at U-32. Conversations are based on issues that the student body has identified, and a brainstorm for solutions. As this discussion continues, one source of potentially valuable information is the comparison to other schools around the state.

Since the passage of Act 77 in 2013, each school has come up with their own way of implementing the proficiency system. There is no consistency.

The Chronicle talked to students from Montpelier High School, and Champlain Valley Union, for a student perspective on how other schools have dealt with the transition.

Three of the biggest discrepancies between these schools are what shows up on a student’s transcript, the way grades are calculated, and graduation requirements.

What Does It Take to Graduate?

Kailea Silvers is a junior at Montpelier High School, which transitioned to proficiency in 2014. She says to graduate at MHS, students need to show proficiency in 7 “Learning Expectations” (LE’s): Reading, writing, problem-solving, creativity, communication, citizenship, and habits of learning.

Jackson Neme is a junior attending CVU. CVU transitioned later, not fully implementing the program until 2017. For graduation at CVU, they still use part of the Carnegie System (the old system requiring a certain number of clocked hours).

“We don’t have a number of standards you need to ‘hit’,” Jackson says. “You just have to pass the class to get credits, and then you need the credits to graduate”. 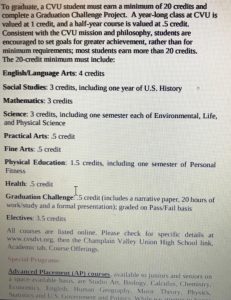 The credit requirements for a CVU student.

Meanwhile, at U-32, students must achieve proficiency in 41 graduation standards. These standards are from a variety of subjects and a 3 or higher is required to pass each one.

The way students receive grades is also quite different.

According to Kailea, Montpelier grades each class with a number, 1-4. However, students can receive increments of 0.5. This means that you can get a final score of 2, 2.5 etc.

This is an example in Montpeliers Guide to Proficiency Flyer outlining how assessments are reported.

Students at CVU can receive increments of 0.1. This allows for 10 decimal point differences between a 3.0 and a 4.0. This makes a huge difference for distinguishing exactly where a student is at. 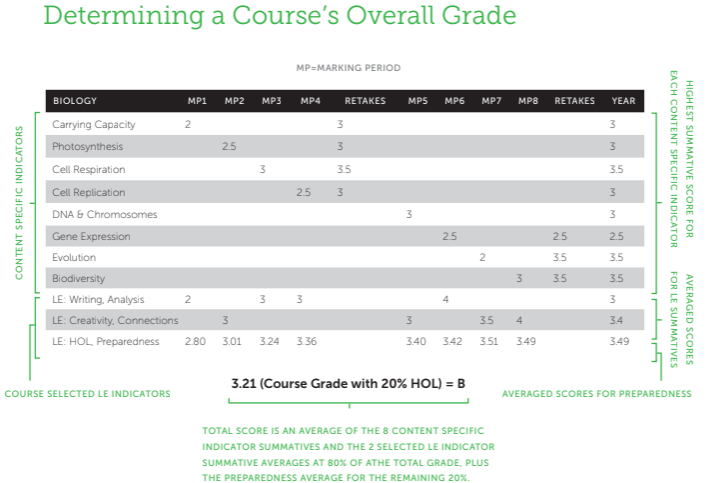 Montpeliers guide on their website on how a course grade is determined.

Some of the differences between the three schools.

What happens when a student is not proficient?

As the year 2020 approaches, students are still unsure of what it means to graduate, and if they don’t hit everything that is expected, what will happen. Montpelier is in the same situation as U-32.

“I’m not sure if there’s a “backup plan”, Kailea says. “It seems like there should be because the requirements are very rigorous and I expect many students won’t be successful in meeting them all. But I’m not sure if they’ll be held back a year to complete them….”

For CVU, it is quite different. Since they are on a credit-based system for graduation, they simply need to pass a certain number of classes.

“If you don’t get the credit you need then yes, you stay another year. But super seniors are not that common- all you need is 20 credits total- it’s not that hard to get them,” Jackson says. 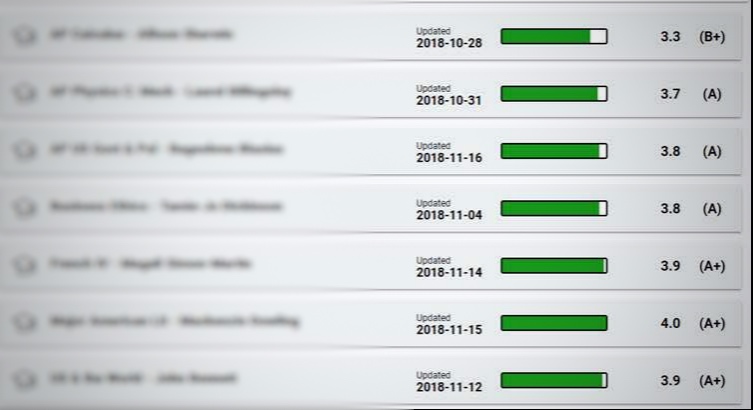 An example of a student grade portal at CVU.

Everyone agrees the new system asks students to meet a much higher bar. But students are struggling with the transition.

“I think the system is trying to get students to “rise to the occasion” because if they don’t, they won’t meet graduation requirements,” Kailea says, “but I think it’s unfair and unproductive to expect students to suddenly grab some motivation and discipline out of thin air just because they ‘have to.’”