The Year of the Proficiency: Can you be “Advanced” without AP? 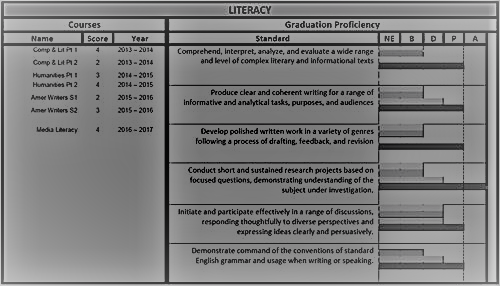 Sylvie Williams walks into pre-calculus class at 8:10 am on a Friday morning. Her teacher hands her an entrance ticket. She pulls out a pencil and sets to work. As she works to solve the domain of a function, her teacher passes out the quiz from the previous class, incorrect numbers circled in red pen, a grade in the top right-hand corner.

Sylvie is a junior, one student in the class of 2020, the first to graduate under the new proficiency system of assessment.

Even as Sylvie’s graduation approaches, the system is still being reworked. The administration and faculty continue to make fundamental changes.

At the end of the four years of highschool, students who are at the top of their class will have transcripts with many “Advanced” scores, demonstrating the highest level of academic success. 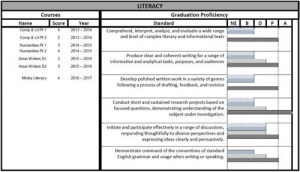 A typical transcript on the left column shows the classes a student has taken and the grade they received, and on the right-hand side demonstrates the graduation standards that are in progress of completion.

However, Sylvie experiences an issue that many other juniors are facing: unless she takes an AP math class, she cannot get an Advanced on her graduation standards.

But that’s not the case in other departments.

For example, in the social studies department, Zachary Gonzalez, said, “Students in my regular US History class who get a 4, get a 4 [an Advanced now] on graduation standards.”

Other subjects are similar.

“Every [English] class that we teach here, you have opportunities for reaching a 4 for graduation standards,” said Jenn Ingersoll, head of the English department.

“So students have the opportunity to get a 4 on many many assessments, 9-12,” she said, “simply because writing is a process, it’s not like we only teach a certain level of writing…”

Many other teachers and department heads were unwilling to go on the record. But for these two departments at least, the Advanced is possible without an AP class.

Ingersoll’s view on AP courses seems to run against the policy in the Math department.

“If somebody is taking an AP level class, the 4 is going to be more like what’s expected at a college,” she said. “It’s really even beyond graduation. A 3 is really what a 4 would be for any other senior-level class”. 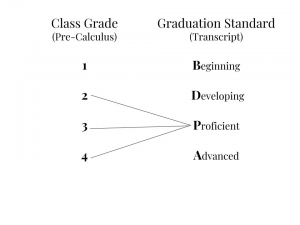 For a student like Sylvie, who wants to apply to selective colleges, she will be striving for as many Advanced’s as possible.

“As a junior in Pre-calculus, I am already taking a course a year above the majority of my peers. I have shown again and again that I can handle a course on an advanced track but my grades will never represent my hard work, effort and drive as a math student”.

Sylvie sees herself at a disadvantage compared to students at other schools who had the ability to get an “Advanced” by the time they finished junior year, around the time transcripts are sent out.

“When I apply to college, I want to have an equal opportunity to be considered as other kids,” she said. “Applying to college is already challenging and financial aid is hard to come by, and an ‘average’ score in a class is setting me up for more failure.”

Up Next: Lessons from Maine