Gender Means You’ll Judge Me For This

I wore sparkly high heels, fishnet tights, a short skirt, and a black lace bra. I was wearing heavy makeup, my hair was teased, and a multitude of hickeys covered my neck and chest. Written on my torso in red lipstick were the words, “Gender means you’ll judge me for this.” 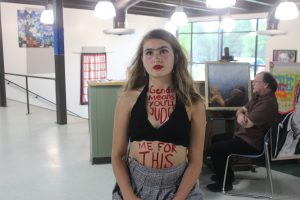 The prompt for the gender parade at the Arts Bash planned by Dakota Dunham and Krista Dy was to dress how gender means to you. Upon hearing this, I thought about the most significant way gender has impacted clothing in my life: what I can not wear due to my gender.

Whether it’s due to social code or dress code, the societal message is the same; if you are a girl, woman, or have what would traditionally be perceived as a female body, you are objectified, sexualized, and shamed. These are manifestations of rape culture: “a setting in which rape is pervasive and normalized due to societal attitudes about gender and sexuality.” (Wikipedia)

Ever since I was in elementary school I had to deal with the contradictory societal messaging that rape culture entails. Firstly that I must wear a bra, then that my bra could not be showing for that would be “inappropriate.” This followed me into middle school, when wearing the same clothes looked at as “cool” by my peers got me in trouble with authority figures for being a “distraction”.

One of the most oppressive aspects of rape culture is that it is so paradoxical. On society’s one hand women are hyper-sexualized and objectified, on the other hand we are taught that our body is inappropriate and a distraction. No matter which hand you listen to, you will be judged.

At the Arts Bash  my performance started walking through the hallways, around the art. The halls were so filled with students and their families that you had to push through the swarm to get anywhere. The diversity of the student body was revealed to me through the varied reactions I received, from hateful to proud, shocked to indifferent. I noticed some things. I got extra attention from people. They would not openly read my torso or speak to me and they would avoid eye contact or looking at me at all if they saw I was looking at them. One person gawked at me like she was simultaneously extremely concerned and disgusted, until she saw that I was smiling at her. She looked away quite quickly. I decided because people felt uncomfortable reading my torso that I should switch things up.

I brought a stool where I would be slightly in people’s way, where they would be forced to look at me. I tried looking at people from my perch, but no one would look at me so I turned my gaze upwards. Immediately people felt comfortable reading my message.

Now I had no intimidating gaze, no threatening presence. I was that much more an inanimate object, another piece of art. At one point someone stood in front of me, I continued to look upwards. After a while, I decided they must be done reading so I lowered my gaze. We make eye contact, and they hold their hand out in front of me. I bring my hand to theirs and they thank me.

This performance was made possible by a conversation that took place between our vice principal, Jody Emerson, and myself. I prepared to talk to her by gathering ideas and points. I got feedback from a few teachers about the approach I should take, including Chris Blackburn.

Chris told me to approach the talk like a conversation. Not to go in there with a “Me vs. Jody” mindset, but to have the goal of understanding. This completely changed the course of the discussion. I could tell by how Jody first acted and spoke that she was expecting me to be offensive, to attack. When all I did was ask questions and aim to understand her perspective, we both reached new levels of understanding.

In the end, she gave me permission to wear a bra, an exception to the dress code given to students that go swimming on school trips. I encourage anyone that wants to make change, that is passionate enough to envision a different way things could be, to consider the perspective of understanding and compassion versus competition and right and wrong.