Editor’s Note: The Confederate Flag Debate was initially published in May and June of 2018 as two separate pieces each outlining a different side of the debate.

In May of 2018, U-32’s school board accepted a proposal by the BLAAMM group to raise the Black Lives Matter flag outside the school. The decision was met with much controversy, most vocalized more or less civilly through callbacks and spontaneous discussion. However, by the account of some students, not all opposition was so innocent. On the day the flag was raised, a group of students flew the Confederate battle flag out the window of a school bus. 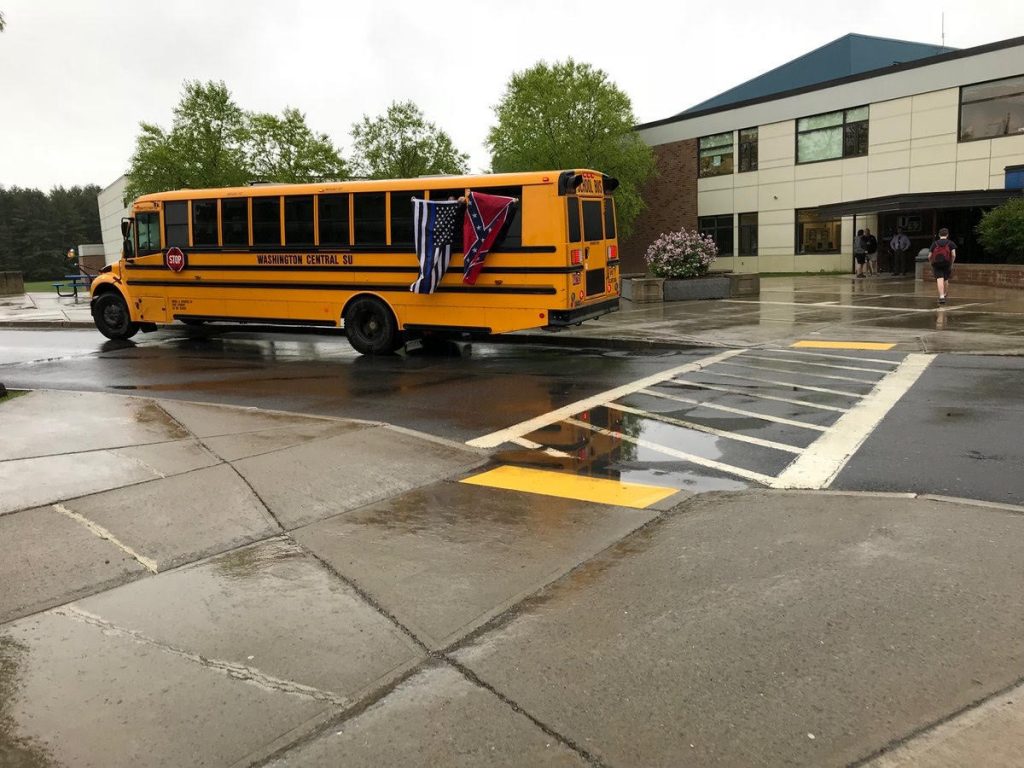 Devante Lee is a junior at U-32 and member of BLAAMM.  He has observed a recent upsurge in Confederate iconography at U-32. “I hadn’t seen [the Confederate Flag] once until we raised the flag.” Devante isn’t alone in the questions he raises about its potential linkage to the BLM movement.

These questions have also been raised within Seeking Social Justice–a student group founded in the fall of 2017. “In August of that school year I was looking at what was going on in Charlottesville,” says Meg, one of two teacher advisors for SSJ, “coming back to school and saying what can we do, what can we do. There seems to be a rise in hate and divisiveness. What can we do.”

Within the past few months, the focus of the group has shifted toward Confederate iconography at U-32 after an apparent upsurge in Confederate screensavers and other displays of the symbol.

Then on the morning of April 1st, U-32 students received an email from the SSJ group. The statement was made that SSJ was “…proposing an initiative to eliminate hate symbols from our campus because we believe their presence creates a hostile educational environment. This includes the Confederate flag, swastikas, and other identified hate symbols”. The email contained a survey regarding student opinions on the flag. Over 200 responses were recorded. 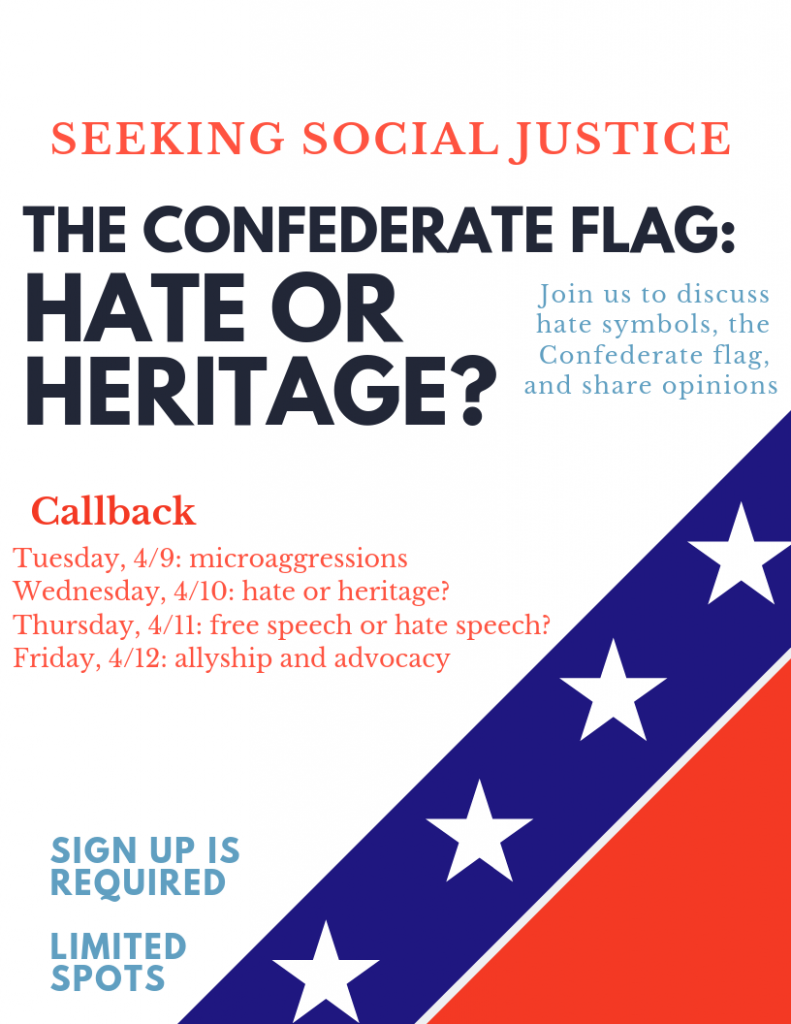 SSJ also announced callbacks focused on the flag and related subjects the following week. In their own words, “This is just the beginning of a conversation.”

This email became the center of yet more controversy, primarily derived from the language about “eliminating” symbols including the Confederate flag. There were also objections to the classification of the flag in the same group as the swastika.

For some at U-32, the proposal read as a desire to limit free speech. So what does the group itself have to say about its motives and intent?

“We were curious,” says Meg Allison. “Is there more [Confederate iconography] now that the Black Lives Matter flag is raised? Jody was coming to our meetings and sharing things that the janitors would see.”

“There are some limitations on freedom of speech in schools,” says Meg. “If it affects the safety of our students or if it disrupts the student environment.” She is referencing the court case Tinker v. Des Moines which established the precedent that speech may be limited in schools if a “substantial disruption” or “material interference” is presented or reasonably expected by a student’s speech or expression.

SSJ believes there is the potential for this exception to apply to the Confederate flag at U-32. Amy Koenigbauer is the other teacher advisor for the SSJ club. “What does this flag mean to specifically students of color?” she asks. “Does it truly provide a safe environment to students if we allow hate symbols that are harmful to students?” If the disruption to enough student’s education is substantial, an outright ban on the symbol could be legally permissible.

Amy also draws parallels to current rules at the school. “In our handbook, we’re not allowed to have nudity and drugs and alcohol on a t-shirt,” she says. “In my opinion, there are other things that are having a greater impact than nudity on t-shirts”.

Importantly, Meg addresses the idea of an outright ban that sparked the initial controversy. “We don’t want to rush into anything” she explains. “I think the dialogue is where we can learn from one another.” She talks further about plans for future callbacks similar to those held the week after the email.

SSJ is adamant about taking measures to reduce what they see as harmful symbols at U-32. “For me, the line is ban versus zero tolerance,” says Meg. She explains that a zero tolerance policy would deviate from an outright ban in that displaying certain symbols would result in dialogue rather than punishment. “You’re gonna get talked to by every teacher,” she says. “There’s probably going to be an RP circle.”

Currently, there have been no official proposals presented to the U-32 administration. Amy says, “probably what this would really result in is us writing a proposal for some language about hate speech and hate symbols to be in the student handbook.”

The discussions around limiting expression of symbols at U-32 has aroused much disagreement among students. Disagreement, however, does not always have to mean division. As Meg puts it, “truly knowing and caring for someone you disagree with, is really important.”

In Part One of this series, focused on the proposed Confederate flag ban and the perspective of those who support it, one incident came up repeatedly. Teacher advisor to Seeking Social Justice Meg Allison explains:

“A student, Noah Witke Mele, took a picture on the day the Black Lives Matter flag was raised of a Confederate flag hanging out the back window of a school bus.”

Many believed this act was done in an effort to intimidate black people and other minorities at our school in the aftermath of raising the BLM flag.

The student who flew the flag on that day, however, does not agree. Dustin Clark was a sophomore at U-32 the year the BLM flag was raised but no longer goes to the school.

For people like Dustin, the raising of the BLM flag was the open alignment of U-32 with the political values of Black Lives Matter, a controversial organization that he and others disagree with.

“If they want to ban the Confederate flag in schools, shouldn’t all flags be [banned]? Including Blue Lives Matter, Black Lives Matter, etc.” Dustin says. “They’re all interpreted differently from person to person.”

At the center of this discussion is the question: What does the Confederate flag really stand for?

Dustin’s family connections to a Southern identity and political beliefs shape his perception of the flag. “The modern representation of the Confederate flag is just a way of saying ‘hey, I’m from the south and I’m proud,’” he says. “I have connections. I have ancestors who fought both for the North and the South during the Civil War… I don’t see the flag as a symbol of hate.”

Devante Lee, a student who appeared in Part One of this segment, doesn’t see the flag in the same way as Dustin.

“When I see it,” Devante says, “it makes me think of what they were fighting for–some parts of it, which is the slavery aspect and the three-fifths of a person… it’s more like a threatening thing to me.”

Another student, and junior at U-32, Jack Fortin, expresses yet another interpretation of the flag: “I think it represents rebellion.”

Dustin perceives a changing landscape for free speech at U-32. “Myself and others have brought Confederate flags in before and nothing was ever said.”

With the increasing discussions about racial politics at U-32, sentiments on both sides have become more overt. Meg Allison says that after the BLM flag was raised last year, there were more “folks reporting they were seeing Confederate flags… There was talk we were seeing more of this.”

Despite all this controversy, and the strong feelings it evokes, Dustin, and many others like him do not see the personal beliefs of other students as justification enough for the banning of the flag.

“Over time we adapt and change the meaning of a lot… same for the flag.” Much “[depends] on how they view the flag regarding their beliefs,” Dustin acknowledges. But “I don’t see a problem with the flag in schools.” 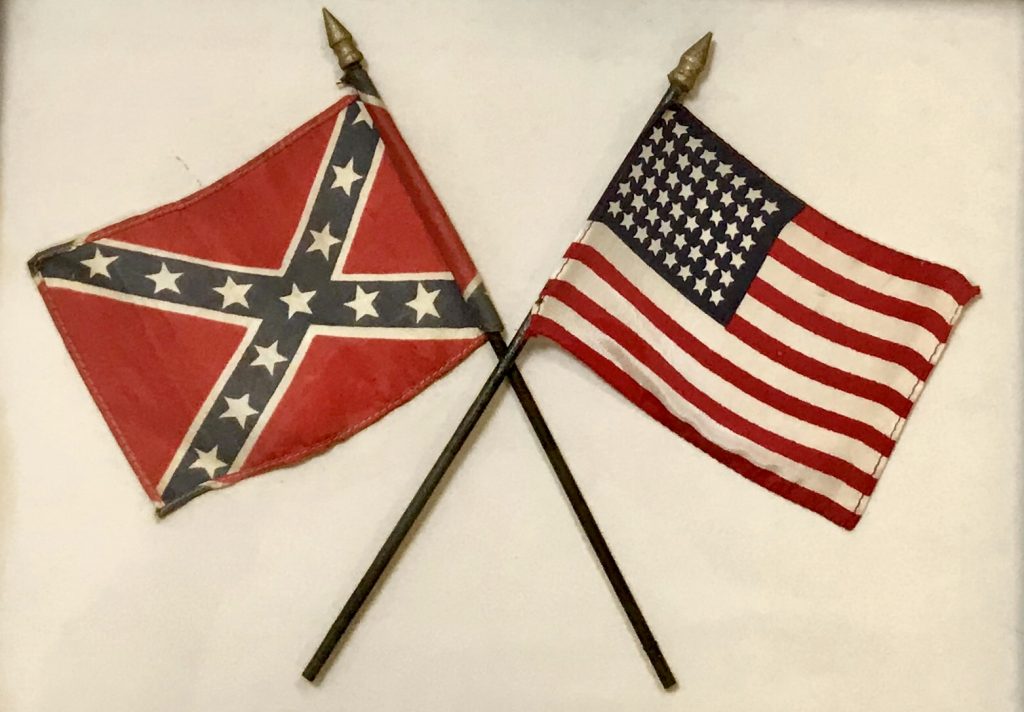