It was the beginning of the 1978 school year, and Pat Fair had just been hired as one of the school’s librarians. As she sat at U-32’s library’s reception desk, the ceiling rose two stories above her,  with several windows looking down into the space.

Nowadays, the library lacks the two story-high ceiling that made it seem so huge back in the day, but until the COVID-19 pandemic hit, it was just as busy.

While all this is going on, Pat quietly sits at her desk and goes about her daily duties, watching the kids in the library as if they were her own. She has been here, dutifully presiding over U-32’s library for an astounding 44 years.

Pat still remembers what it was like when she first came to U-32 – fondly or otherwise, with its obviously organized (but simultaneously chaotic) way about things. Students had a nasty habit of running through the library to get to their classes, and often in the process they’d steal a book, which the librarians would eventually find abandoned under a stairwell or inside a drinking fountain. 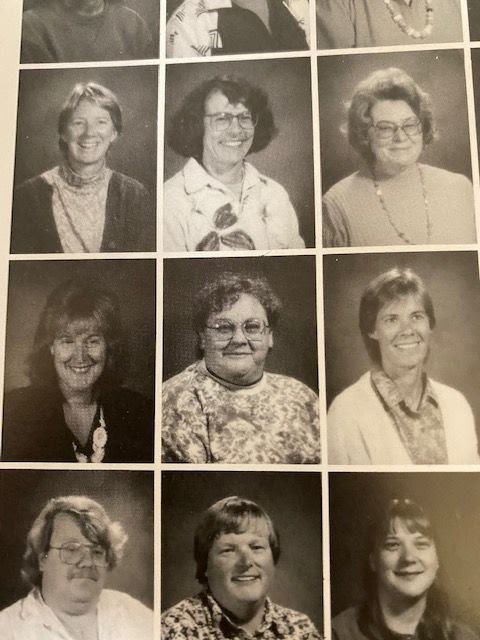 An image of a U-32 yearbook from the late 70’s, with Pat Fair in the center

“The biggest problem for us was that we had a lot of vandalism,” she said, “because there was no control.”

In those early days there were few walls  at U-32, and Pat said it often became confusing when two classes were being held simultaneously. At times a French and English class would be occuring at the same time in different rooms, but due to the lack of walls the students would often get confused and the class[es] would descend into chaos. Great teachers like Kathy Topping, managed to keep their classes under control amidst the hectic atmosphere.

However, Pat also recalls how the lack of walls allowed for students and teachers to really connect with one another. “You’d see the teachers there, and sometimes we’d see students just leaning up against their desks, visiting with the teachers,” she said. “It was just like a really nice open concept.”.

Over the years, all of that changed. It changed again in March of 2020, with the COVID-19 pandemic. “The big thing is they’re not here,” she said. “I used to have a lot of kids that would get in here early in the morning with me and we’d have a good visit.”

Jenn Ingersoll, a teacher at U-32 who also attended school here from 1981 to 1987, remembers her time as a student with Pat fondly. “Pat has always been sort of like a grandmotherly figure with those of us who graduated and then came back to work,” she said.

“And she makes incredible donuts,” Jenn added.  “She knows that I love donuts, and it’s always during sugaring time.  she was always in the habit of making donuts for the person who was sugaring in her neck of the woods, and so they would trade syrup for donuts.”

Meg Allison has worked alongside Pat since her first year at U-32 in 2016.“No one’s been here longer than Pat,” she said. “She’s full of stories; if you want to know anything, she’s got the story behind it.”

“When Pat retires, who’s gonna tell those stories?” Meg wonders. “They’re not written down… she’s taking with her all of these unspoken stories.”

Hannah Rea is a senior at U-32. “In all of my six years at U-32 I don’t think Pat missed a day of saying good morning to me,” she said. “Talking with Pat is really amazing because she has been at U-32 so long that she has endless stories of past students and events. Pat is a no nonsense kind of lady, and if you cause a ruckus in the library she isn’t afraid to tell you to leave. In my opinion she is what keeps the library sane and not just another version of the atrium.”

Pat is retiring this June. “I definitely know I will miss working here,” she said. “The kids have kept me young, and one thing about my job here is, I go away from here every day learning something new.”