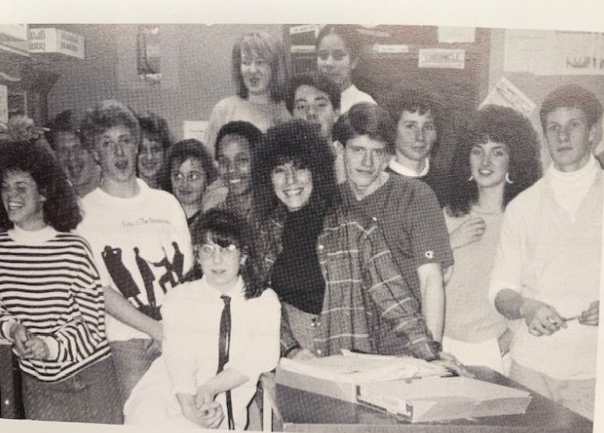 Chani Waterhouse, U-32 High School Class of 1988, was a co-editor and leader of the U-32 Chronicle for both her Junior and Senior years. Her article about students successfully pressuring colleges to divest from South Africa in the midst of the Apartheid won The Chronicle a national award, and every week she and a small group of journalists helped provide the student body with important information regarding the school and the community. In celebration of the Chronicle’s 50th anniversary, Waterhouse reflected on the paper’s presence at the school over three decades ago:

“We put out a paper every Wednesday in those days, and there were two teacher advisors, Joanne Greenberg and Steve Barrows, helping with the paper together. They were the real editors, but the students did investigative reporting stories every single week for the paper.

And it was on schedule, the editors would help edit the articles the other students have written.”

“Everybody who was part of the newspaper participated, and we would just stay after school on Tuesdays, we’d be there until eight or nine o’clock at night, every single Tuesday working on the paper together. But even though personal computers started to be a thing in those years, there weren’t any computers at school at all. And so in the journalism room, which was right off of the science lab, there were a bunch of typewriters along the wall. And so people who knew how to type would take all the stories out and they would type them in.”

“The paper was printed out on 11 by 17 sheets of paper that were folded in half, like a book. Each page in the paper would have two or three rows of copies so that you’d have to set the typewriter to create the super narrow margins for copy. And so someone would take the story, and then we had this graph paper that we would run through this machine that was coated with wax. And then the middle of the room had a big table covered with glass and we had these exacto knives that cut the typed pages and then we stuck the copy onto this wrap paper using the lines on the graph paper to try to line it up. But if you see any of the old archived editions, things will always look crazy.”

“It’d be like in the moment deciding she will go from eight pages to ten pages, which go from ten to eight. And then then once it’s laid out, people would start line editing it, and you’d find errors. And so people would be going back to typewriters and typing a single line of the story. And with the exacto cutting out that single line and trying to stick it on to the story. And we’re getting tired. But, there were like 12 students in there and everybody had a job to do and it was really fun.”

“There was a darkroom there, and they were literally doing headlines, they would lay the letters one by one, and put them onto photographic paper. Depending on how much space you have for the headline and how many words you came up with for the headline, you’d have to choose different size letters. And for the photographs, they would start with a negative sheet. And they go into the darkroom, it goes through this series of processes and they end up with a positive image of that photograph.”

“Before my time, they literally printed it. But by the time I was there, they used this super old fashioned photocopy machine. They would photocopy the paper on Wednesday mornings, in the main office, which was the only photocopy machine in the whole building. And then we would sell them in what was then the student lounge-right now it’s where the atrium is-with a lot of student lockers in there. So different students would take shifts at the table and everybody would buy the paper and read it. It cost the kids a nickel or dime or something. We didn’t have as much to do back then and we certainly didn’t have a lot of media, so yeah, everybody would buy it.

“I did a lot of interviews over the phone. Or occasionally, if we were writing about things happening in school, I interviewed people in person, but I couldn’t type so I would just be scribbling. I pretty much had no way to record the interviews. Theoretically, I could have been recording, but if you’re on the phone, there was really no way to do it. So basically, I would just be writing like mad to try to capture people’s quotes.”

“I remember I went to the homeless shelter. And I think I talked to some people who were sitting there. I had never been into a homeless shelter, and it’s interesting in hindsight, like, my family actually was marginally housed and lived in a campground a couple different summers. I never thought of us as homeless, but in hindsight, that was some of what homelessness looks like. So I don’t think at the time that I felt like that’s why I was interested in writing that article. But I think there’s probably some sense of greater empathy or personal connection or something to that.

“Another article I can remember was an article I wrote about a student movement at the University of Vermont to try to get the universities to divest from investments that they had in South Africa. And this was during the time when the South African government still had the apartheid as their official policies. Students around the country were setting up these college greens- what they called shanty towns- and living in them for even months at a time as a strategy to get attention for the fact that the colleges were making money off of investments that they had in South Africa, and to pressure the universities to get rid of those investments as a way of pressuring the South African government to change its policy. A lot of students participated in these kinds of protests, and they did end up succeeding and getting a lot of universities to divest from their holdings in South Africa.

I just remember going up to Burlington and spending time talking to the students and they basically set up all these makeshift tents and shacks and things. The Chronicle actually won an award that year for that article. The co-editor and I got to travel unchaperoned on a plane to Little Rock, Arkansas, and stay there for like two days and go to the award ceremony where Hillary Rodham was the keynote speaker. I had never heard of her, but she was the wife of the governor of Arkansas, And I remember thinking, wow, she’s really smart and amazing. So that was a big deal.”

“There was one principal who was often looking over Steve Barrow’s shoulder, worried about what was going to show up in the paper. So I think that that is an indication actually that probably some of what was happening at the newspaper was having an impact. If you imagine a school with like, no laptops, no cell phones, it just wasn’t that much going on.

It’s like a thing that you could count on on Wednesdays as there would be this paper. And there might be somebody that you knew quoted in it, or even a photograph of someone you knew, or something about a sports event that you were interested in. It was an important part of the culture of the school, like a ritual that people can count on.”