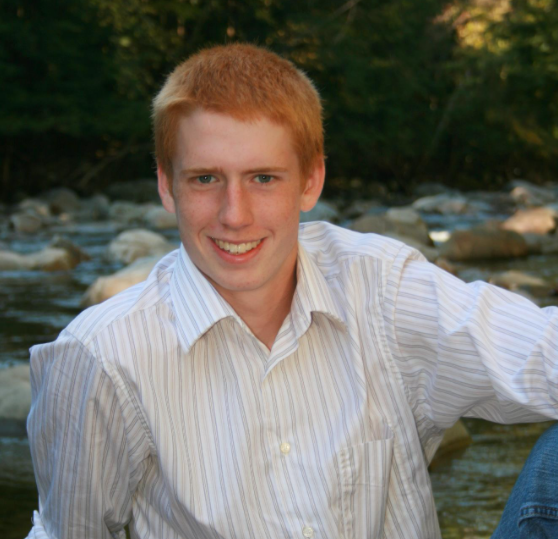 Going into the summer before his senior year of college, Drew Junkins still had no idea what he wanted to do.

“I applied to some internships and I didn’t like what they were like, one of them that sticks to me was an internship as an actuary… Like the pay would be excellent but it just wouldn’t be fun. That’s not me.” Drew went to college majoring in math and after three years of school, he was still searching for a career.

Six years later, Drew is in a classroom full of high school students saying things like,

“What’s 3 add 5” or, “ You see that! That’s funky right there.” He is always keeping his math classes entertained with his great sense of humor and will always make you laugh with his side comments. He is also never short on brightening up someone’s day by handing out compliments such as, “Josh, you’re beautiful”.

Many students refer to him as the “GOAT” or “the one and only Drew Junkins” and he is nothing short of that. Drew was voted the teacher of the year for the 2019-2020 school year by the students at U-32. So how did he go from not even knowing what kind of job he wanted to do, to being one of the best, if not the best teacher in the U-32 district?

Drew was born in New Hampshire but moved to Vermont when he was one and a half years old. He grew up in the small town of New Haven, which is near Bristol and Middlebury.

“It’s a pretty big farm culture there,” Drew said. “And growing up I didn’t really live close to friends.” Living in a rural area, he and his friends spent a lot of time outside “playing in sandboxes and playing in the woods.” 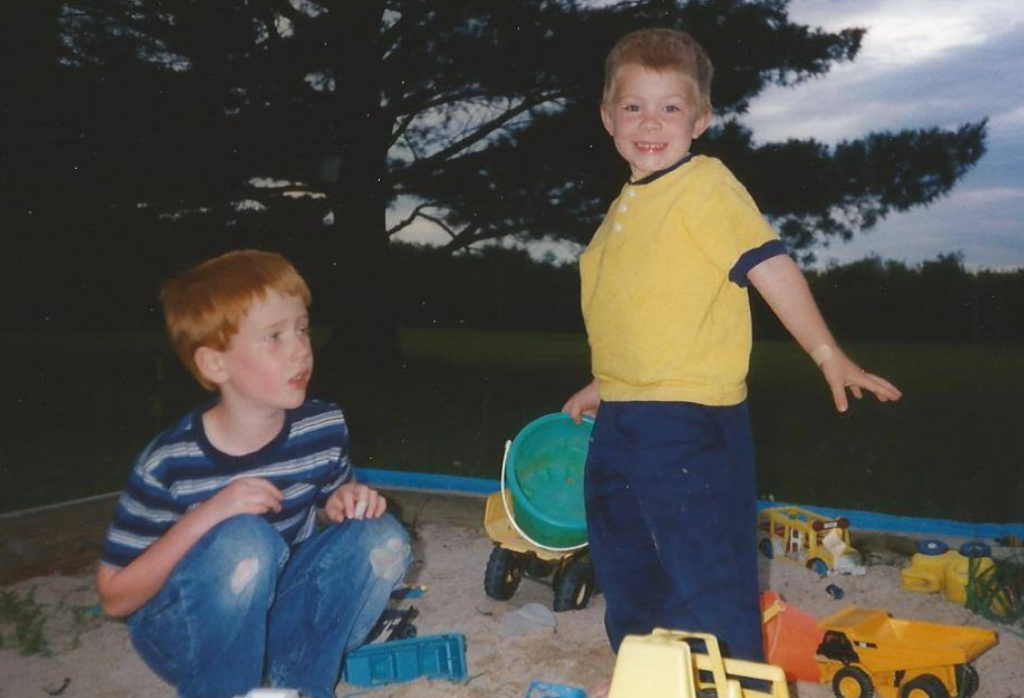 He said, “One thing that there was diversity in was social-economic class,” and he explains that “we had a millionaire in my friend group. And we also had a friend that was on food stamps.”

Growing up in a community with such economic diversity he always felt the need to support fundraisers and help the community in any way he can. He remembers as a little kid on “green-up day…my dad and I walked in the ditches of the road and cleaned up all the trash ”

And the most important fundraiser he is a part of is called “The Three Day Stampede” in Bristol. It is a fundraiser for cystic fibrosis which is a very deadly lung and digestive disease.

He was introduced to the fundraiser by his highschool football team. He describes The Three Day Stampede as a “Huge flea market. It was three days. It’s got clothes, toys, it’s got power tools, it’s got furniture… Businesses just donate stuff. They donate cars, they donate antiques, they donate a whole bunch of stuff.” 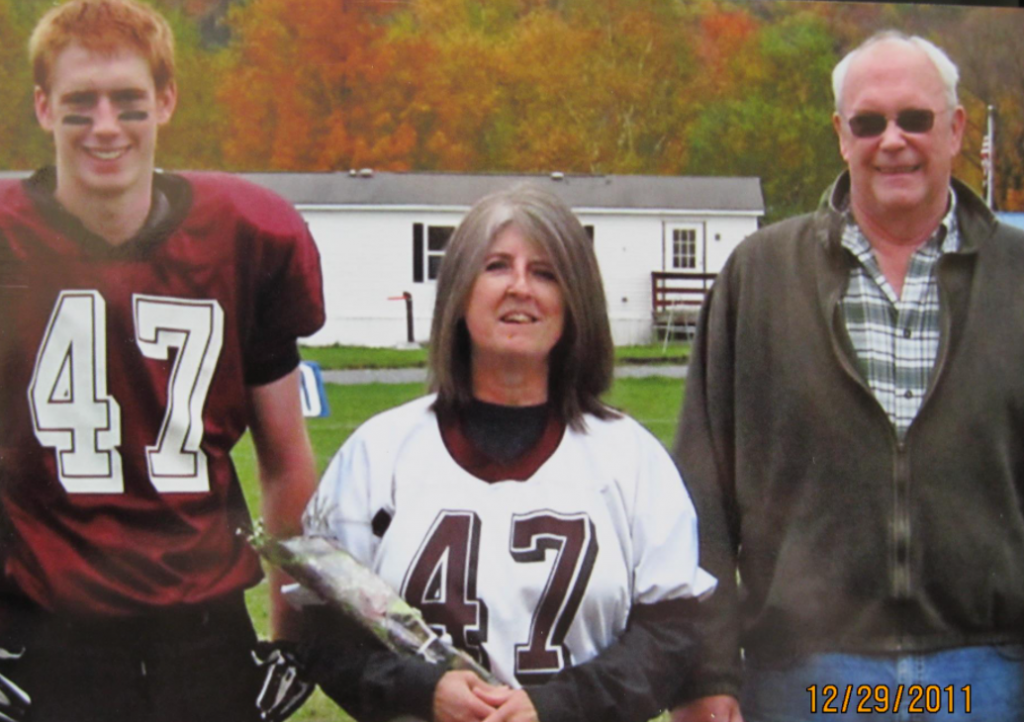 “I would go there and unload the trailers and put the stuff in display tents. I would help clean up,” he said. Drew would always help out because he felt the need to help out the community. “To be honest I still work there even though I have an ex-girlfriend that works there. But it’s still worth it. Because it just means that much to me to be part of the community there.”

Helping out with community fundraisers is not the only way he helps out the community. Drew has been a camp counselor at Mary Johnson Child center since he was sixteen. He explains that the “…camp was sort of a lower socioeconomic camp” and some of “the kids experienced a lot of trauma.” His mother was a teacher at Mary Hogan and worked with a lot of the same kids.

“She works with the ones that were big trouble and stuff,” he explained.

He said the heads of the camp “…Knew I was my mom’s son… So they put those kids in my room to be their counselor and I had to learn how to handle these kids.” 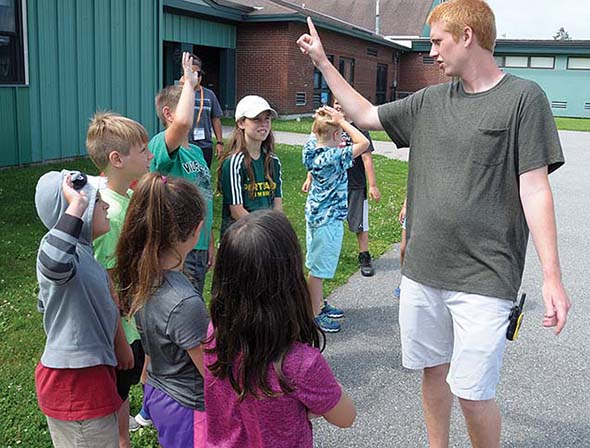 “So I started to do that and they started to put me in tougher rooms.” And as a result of this, “I started to enjoy that challenge,” he stated.

His biggest challenge was yet to come.

“And we got this one kid, sixth grade and he was a meeeaaaannn kid.” Drew really felt bad for this kid because he explained, “he went through a lot of stuff that no young kid should go through.” Drew describes that the boy, “would just push kids to the ground and kick them, hit them.”

He says that the boy was so much trouble, “he could never go on our beach trips because he wasn’t allowed.” Drew then said. “So I made it my goal that he could go on those beach trips.”

Drew had learned how to handle kids like this a lot better after working at this camp for a few years so he was confident he could handle this kid.

“So we would work together and I was his guy.” As Drew made it his goal for the kid to go on the beach trip, “We started to work on some skills and he started to learn.” Drew goes on to say. “Don’t get me wrong there were still times when he would beat kids up and all that stuff.” But “He got better.”

If you don’t know Drew, he is a person that can talk to just about anyone about anything.

“Then he was starting to be able to control his feelings.” As a result of this, Drew “was like if you do well man, we can go fishing on these beach trips.”

With all of Drew’s help, “it worked. He did really well during the week.” And because of this, “the heads of the program were like yeah he’s good enough to go.”

“That was really rewarding for me,” he shared. This experience was really something he enjoyed. “And I was like man, that felt really good.” Drew goes on to say, “That was the summer leading up to my senior year.” And as a result of that, he realized, “I could use my math degree to teach some kids here.”

Drew (left) summer before the first year of teaching

Drew has not only been a true inspiration to me but has inspired everyone that has been lucky enough to meet him to always lend a helping hand and always help people out that are in need. He is always willing to sacrifice his personal time to help out students with tough school work, and he never gives up on students that are struggling with the class.

He explains that growing up in a small town in Vermont, “you just need to be someone willing to help, no matter what.” And he thinks that is a huge part of living in the Green Mountain state.

Going into the summer before his senior year of college, Drew Junkins still had no idea what he wanted to do. But being a true Vermonter and helping others in his community, he was able to find a true passion of his. He turned his passion into a career and the one and only Drew Junkins said it best, “the rest is history.” 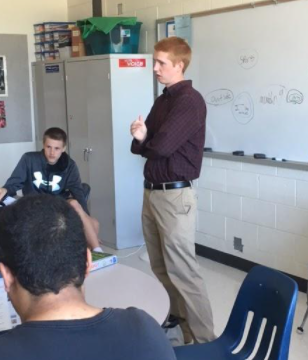