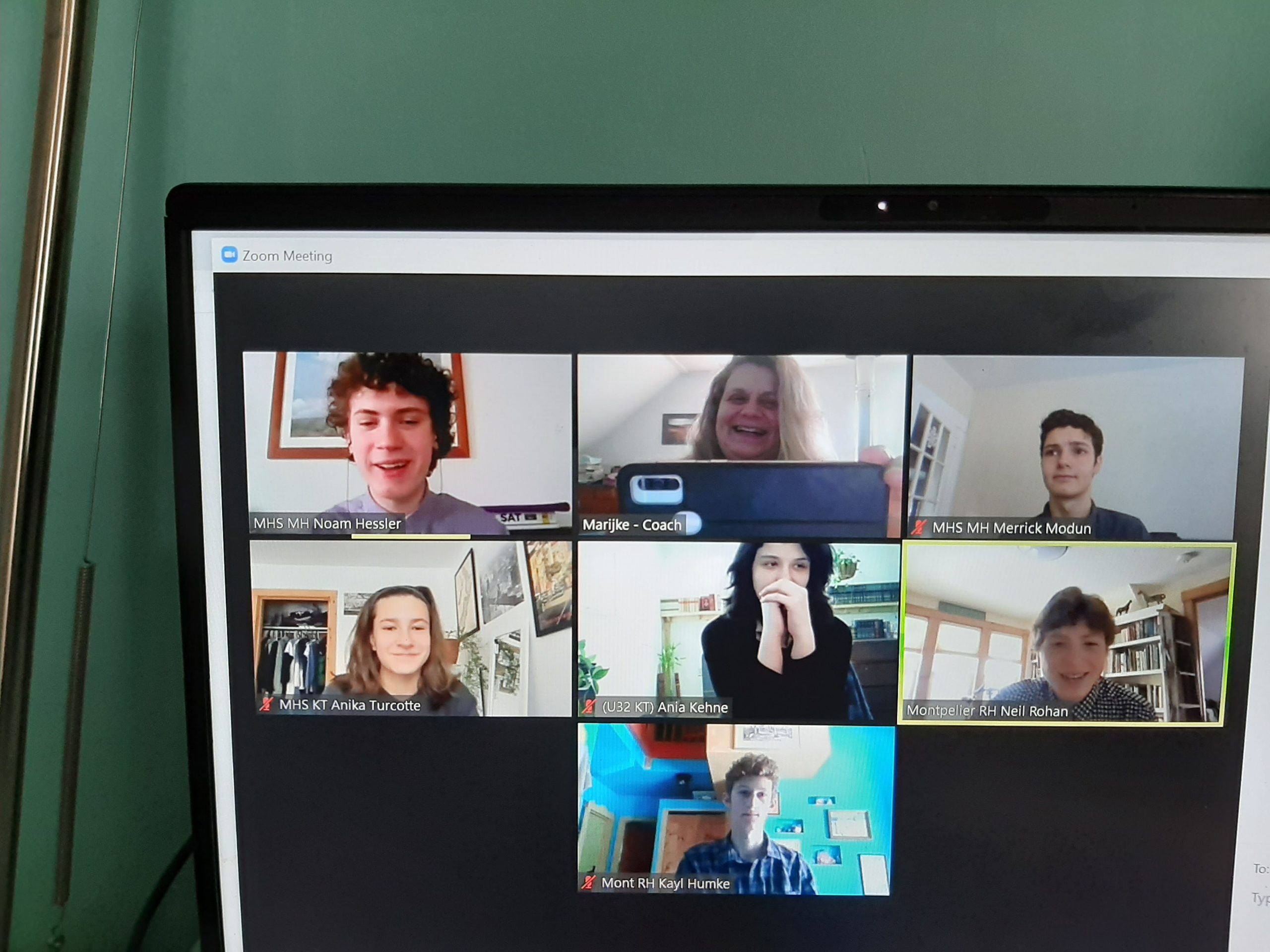 At 9:30 on February 13, six students from U32 and Montpelier High School signed onto a zoom call to compete in a debate tournament. About 40 other kids from around the state attended and a head coach sorted them into their team meeting breakout rooms. Some students were bright-eyed and excited; others were drowsy from staying up late the night before researching the topic and writing speeches.

That day’s debate topic was Urbanization of West Africa. In recent debates, topics have ranged from Medicare to Nuclear Weapons, even Space Force. They usually have some political ramification that is rooted in philosophical arguments underneath layers of practical issues.

Debate is not well known in the U32 community. But is a passionate commitment for high school students all around the country. Marijke Russo is the coach of the Montpelier-U32 debate team. “Debate is not really a club,” she said. “It’s something a little different. It’s a lot more.”

While there are many different types of debate, the most common across the US is Public Forum. That day’s debate was in a Public Forum style. At 10:00, the head coach assigned pairs of debaters to breakout rooms with their opponents. Some opponents greeted each other as friends, while others silently prepared and sized each other up until the judge arrived.

Two teams were each assigned the affirmative or negative argument by a coin toss. U-32’s Ania Kehne and her partner won the coin toss and picked the negative argument: the harms of urbanization in West Africa outweigh the benefits.

One person from each team read their prepared speech. The other member of the team refuted their opponent’s case with prepared blocks. Kehne refuted her opponent’s argument about the quality of life. “In response to your third contention,” she said, “I argue that urban poverty is actually worse than rural poverty because of access to water and healthcare.”

Each competitor read a closing statement that summed up their arguments to convince the judge why they won the debate. Ania did this by establishing the biggest point of disagreement between the teams: What is more important, prevention of infectious disease or access to healthcare? She argued that prevention is more important.

The round was laced with crossfires or direct questioning between the opposing sides. Ania asked her opponent whether urbanization or corrupt politics was the bigger cause of poverty in cities and her opponent responded with evidence about public services available in cities but not in rural areas.

While debates can get heated and crossfires can feel overwhelming, debate ultimately is a friendly competition that promotes collaboration. “In a debate, you may think you’re clashing,” Coach Russo said, “but the hidden part is where you’re doing teamwork.”

After 50 minutes, the first round came to a close. The debaters completed two more rounds that day. Ania lost and won some rounds. Every round is a little different, depending on the topic, skill level, and judge.

Ania said one of the best rounds she has competed in was around offensive cyber operations. It started off on unequal footing, with Ania’s team having done research while her opponents had no finished speeches, no solid framework, and only a few blocks. She decided to take a civil approach. “Rather than overwhelming them with facts,” she said, “my partner and I engaged in a meaningful debate with them.”

Good rounds also involve humor. A Montpelier debater caught off guard once delivered a speech about why he had won the round through valiant effort and “with dignity and grace.” 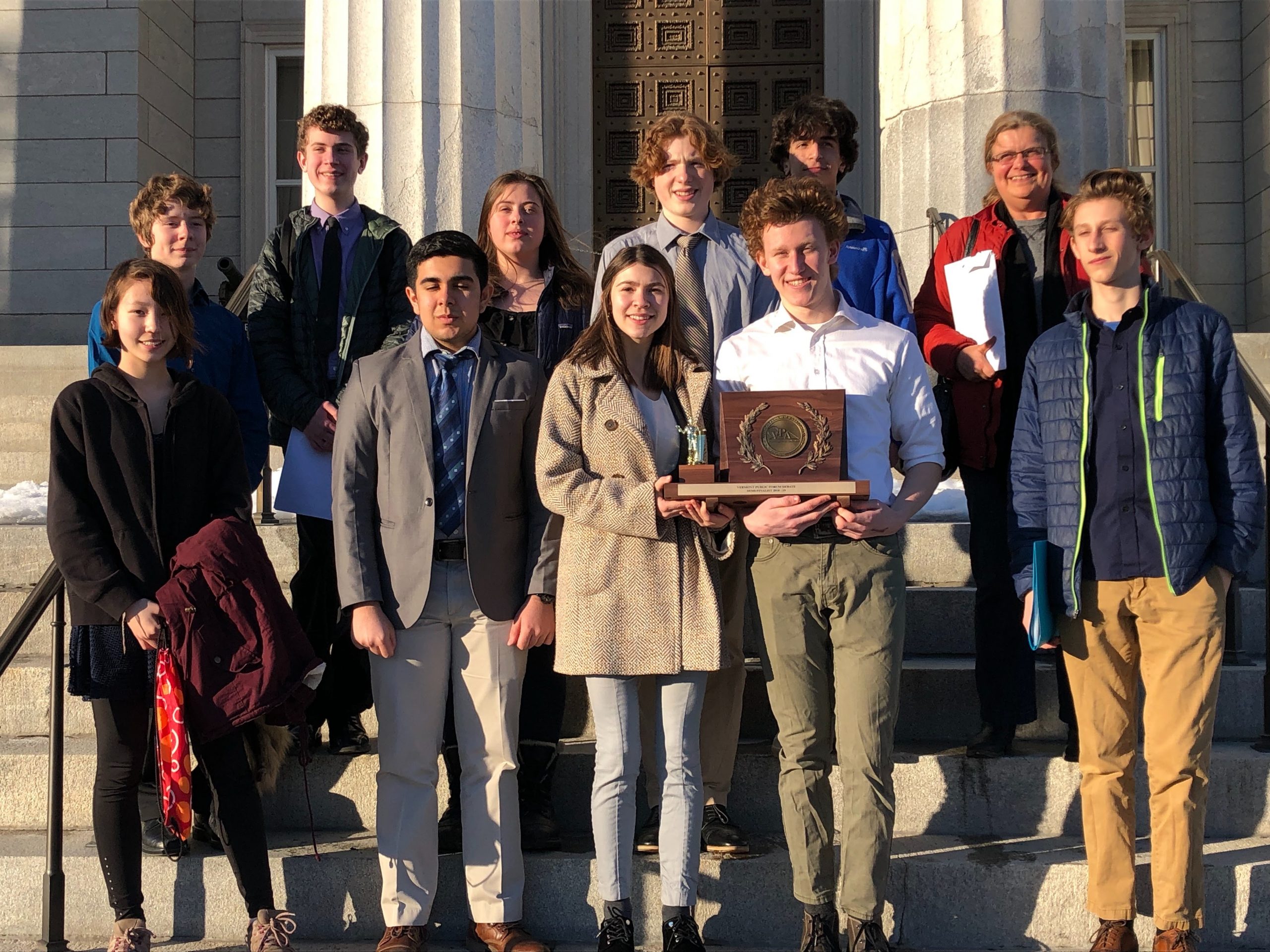 All joking aside, students have something bigger in mind when competing: practicing for the regional and national level competition. The work to get to an advanced level of debating is extensive, with students advised to prepare 200 pieces of evidence for each national-level topic. There are hours of preparation, which can educate students on topics not covered in school.

National tournaments are an exciting chance to meet debaters from around the world. Vermont’s students have debated students from China, South Korea, and Central America. The overall experience of competition, and elimination rounds especially, is thrilling.

At the end of the day, a scroll with the names of competitors who passed onto the next level is projected in the lobby and crowds come to see it. “You see people jumping up and down,” Russo said. “It’s really cool. It’s just exciting.”