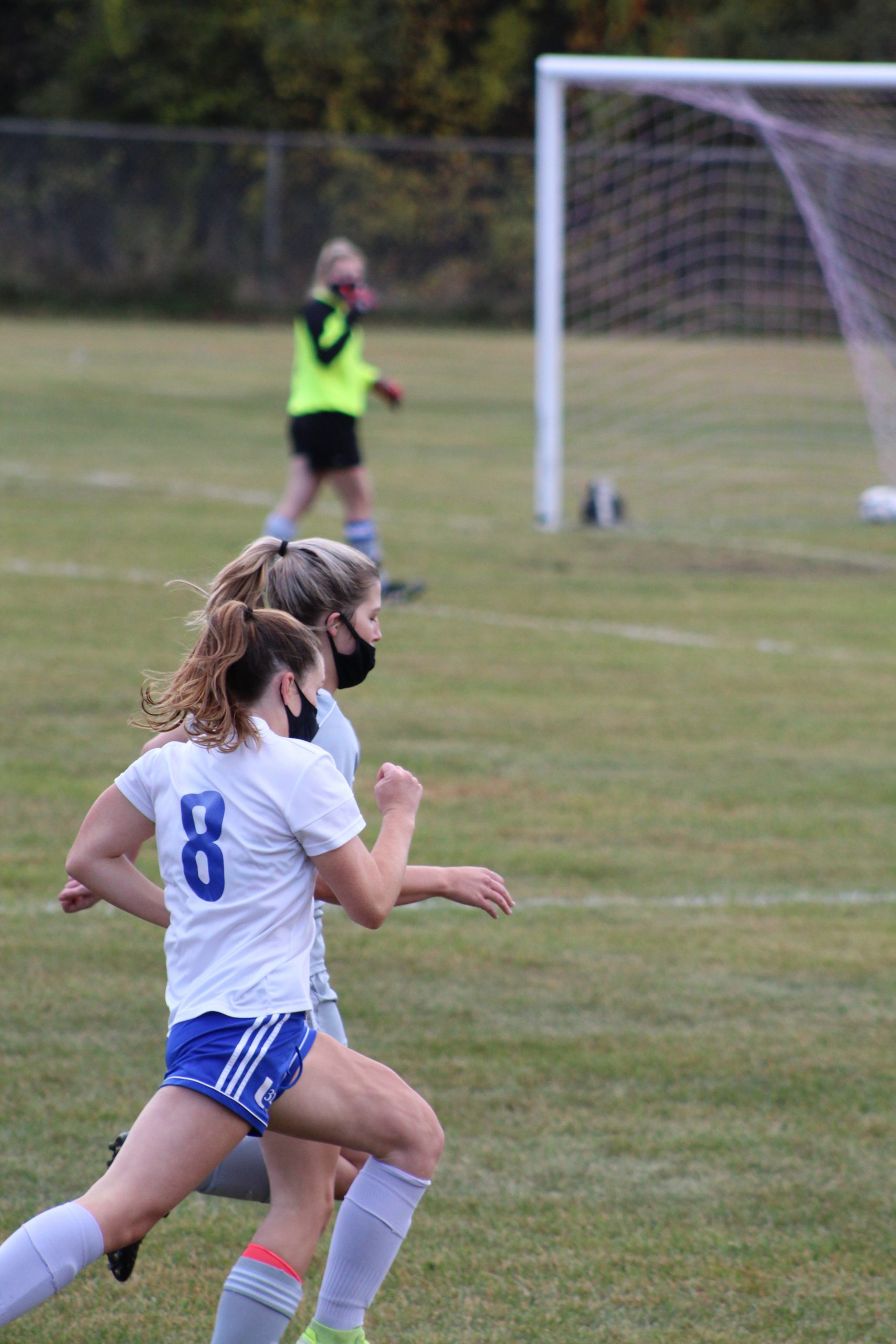 Editor’s note: The girls’ soccer team won the state championship this year (story coming soon), overcoming the many challenges of competing during Covid. This piece from a member of the team, Claire Obeldobel, details some of that journey.
Last October the boys varsity soccer team at U-32 was playing a game on the practice field while the track around the stadium field was replaced. One player struck a hard shot over the crossbar towards the girls practice being held in the small space next to the greenhouse, narrowly missing a player’s head. A gasp came from the crowd, drawing the attention of a middle school team that was practicing in the small area between the varsity field and the outer fence. It was strange to see four different teams all playing in an area designed for just one.

This year the boys soccer team was moved back to the stadium field, but the usual commotion of U-32’s campus during the Fall was gone. Because of Covid, practices were spaced out, masks were required and spectators were limited. Small groups of fans spread out on the huge hill overlooking the playing field while the girls practiced behind the school.

The Federal Agency of Education created a “Healthy Start to School” document that outlined basic rules every state must follow when returning to school in the Fall. Doctors and administrators from each state then added rules unique to their state, and these were sent to each district so that schools could create guidelines that best fit their school. 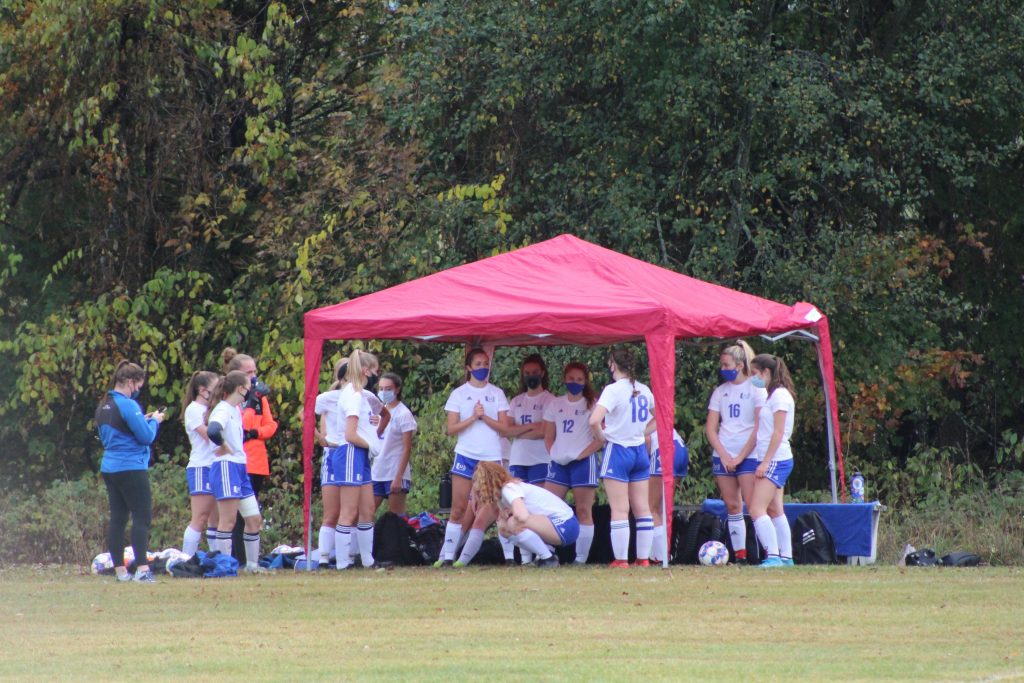 For example, U-32 uses a hybrid learning model that separates the freshman/sophomore group and the junior/senior group each week, with one group in person and one virtual. The groups rotate every week. The school decided that the players allowed to practice would be the ones who attended in person school that day. While this was designed to keep students safe, it’s caused a lot of uproar because the teams could not practice all together.

Hank van Orman is U-32’s Athletic Director. “I understand the frustration,” he said. “Not being together as a full team for practices, that’s really tough.”

Players understand the importance of safety, but struggle with coming to terms with the new rules.

“It sucks,” Eliza Garland from the Varsity Girls Soccer team said. “It would just be so much better to have them practice with us so we could be one cohesive team when game day comes.” 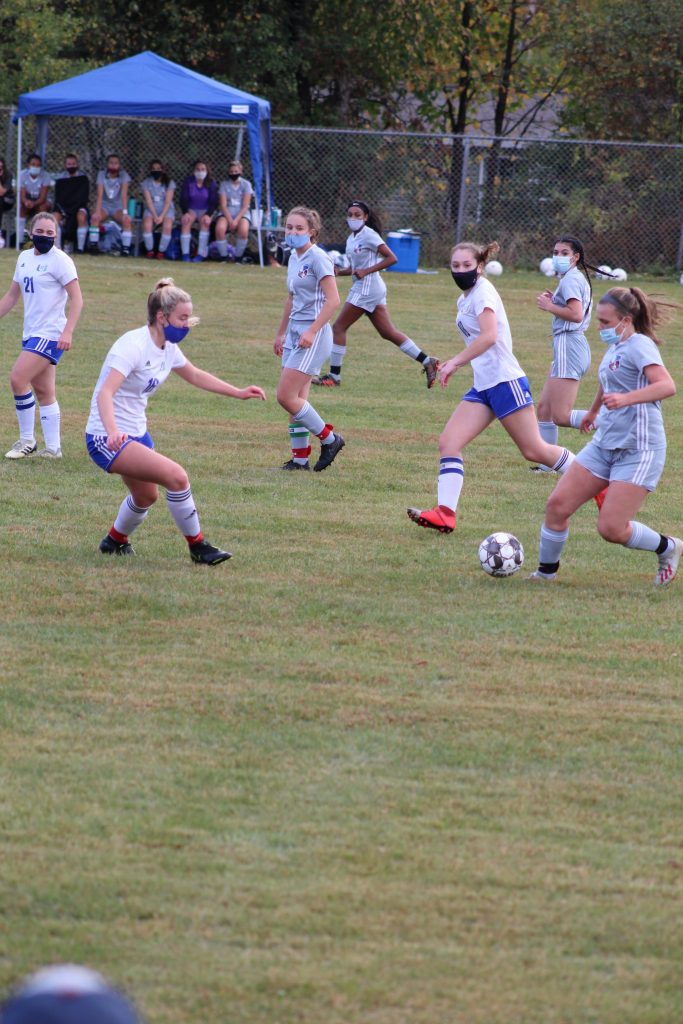 Once the playoffs started both under and upperclassmen were allowed to practice. Virtual week students were required to keep their mask on from the moment they left their car until they returned at the end of practice. It was an improvement but practicing the entire regular season without half the team was strenuous once game play began and affected the level of play.

U-32’s administration also limited the number of spectators, giving each player a certain amount of tickets for each game. Even this rule has caused some pushback from players, specifically seniors who have extensive family.

“Not even my whole family can come,” Eliza Garland said. “We don’t get enough tickets.”

The school has made an effort to broadcast games to the public through CVT Sports, but some games cost $5 to watch online and there was no guarantee that the game would even be put online. Many players wanted the games to be free online so that anyone who wanted to watch the game could. 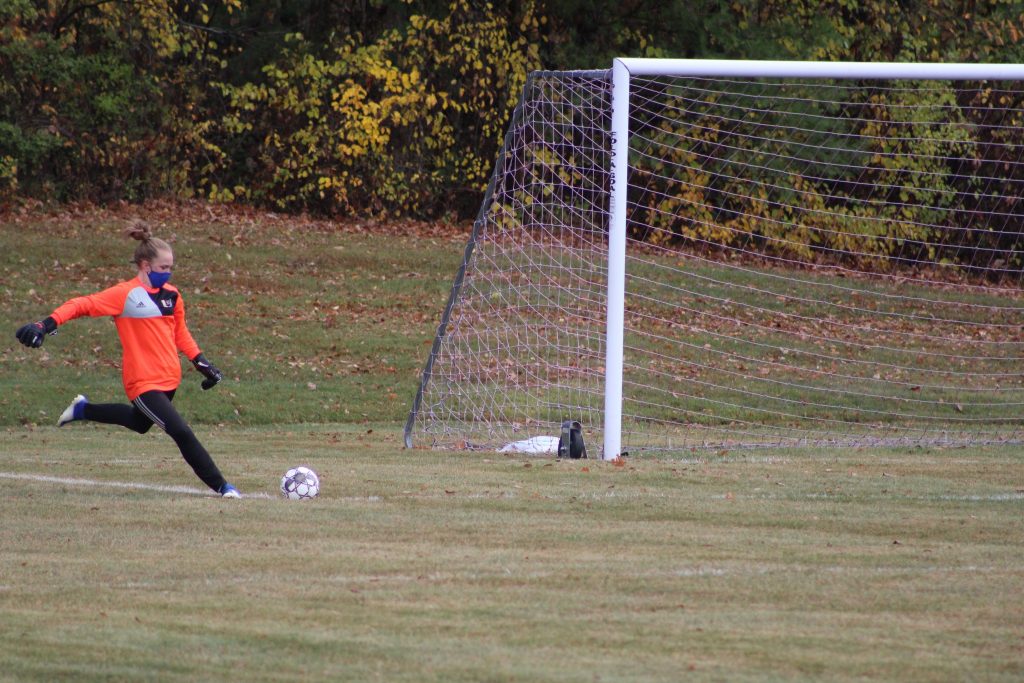 The final rule that was put into place for teams was a mask mandate while playing. This rule has been the easiest one to get used to, because the teams understand the severity of the situation.

U-32 soccer teams did an excellent job at wearing masks during practices and games even with the difficulty it added to breathing. However there was a lot of discomfort for the U-32 girls during their game against Williamstown/Northfield on Friday, October 2nd. 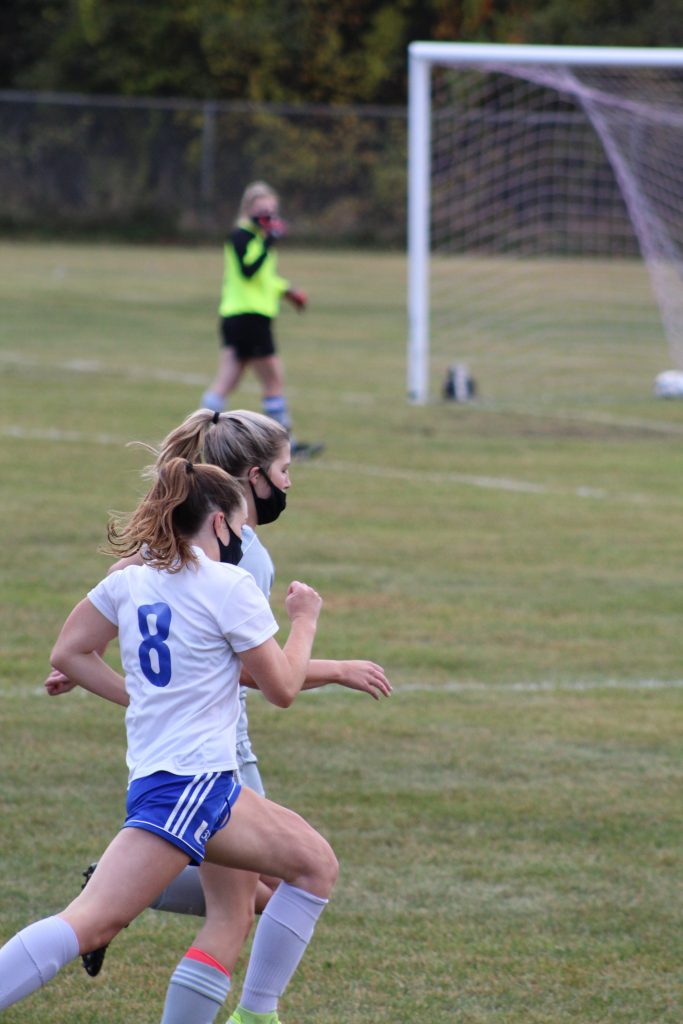 Some players on Northfield/Williamstown wouldn’t wear the masks properly, even pulling them completely under their chin while playing and would only pull it back under their nose once the ball was near them.

The referees refused to call them on it and they too have been putting people at risk by not wearing a mask.

“I guess they don’t really wear their masks because they have to blow their whistle,” Senior Sasha Kennedy said, “but that doesn’t mean they have to keep it down the entire game. I didn’t feel covid safe.”