Positive Pie: A Slice on the Pandemic 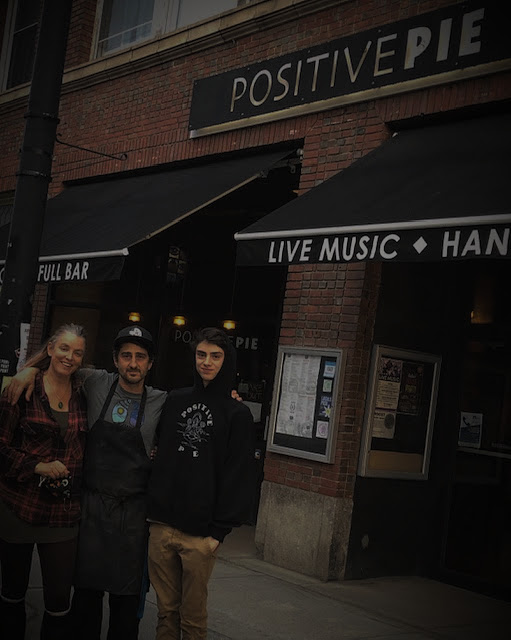 Melissa Whittaker owns a local Italian pizza restaurant alongside her husband Carlo. On Wednesday night, she walked into the kitchen, saw the food windows piled with food, and calmly reached for a pair of gloves. She put food orders together, making sure they were perfect and filled and brought them out to the waiting customers. On other busy nights, Melissa answers the takeout phone, along with tasks to help her staff from feeling overwhelmed.

Melissa is always on her feet, flexible and ready to help keep everything running smoothly.

On Monday March 16, Melissa Whittaker received devastating news from Governor Scott. “That day I had to tell my staff they couldn’t come to work anymore,” Melissa said. “It was very chaotic, and not really knowing what to do or what was gonna happen or how to respond.”

After a month, Melissa thought the business would be back up and working. But things didn’t turn out that way. Positive Pie is beginning to do business again, but not like it used to.

“Our dining room is empty. If you were to walk in, it’s shocking,” Melissa said. “I don’t think we ever thought it would happen. It’s been this constant, having to readjust and think differently.”

When Melissa reopened the kitchen after two weeks of no business, Positive Pie began taking pick up orders. For the first weeks, it was Melissa, her husband Carlo, daughter and son doing curbside pizza five days a week from 4-8. Before the pandemic, Positive Pie was open from 11-9.

“There were times we considered shutting the whole thing down just for our own safety,” Melissa said.

Most of the time in the spring it gets busy and the summer months get the most business, but it won’t happen this summer. The restaurant is only receiving ⅓ of the sales they would have during a normal year.

“We aren’t going to make the profits that usually get us through the winter this year,” Melissa said. “It has forced us to have to be really flexible and not plan ahead which is really hard.”

In the last few weeks, Melissa was given the ok from Governor Scott to slowly bring back counter employees and kitchen staff with the help of the Payroll Protection Program. This program encourages businesses to bring back workers that signed to unemployment. If businesses took part in the PPP, the government would forgive part of their payroll.

Since the PPP, Melissa has opened the full menu and welcomed back more of her employees. Delivery drivers are back, as well as more counter staff, a dishwasher, two pizza makers and a line chef. Positive Pie is now open seven days a week from 11-8.

Now, when someone orders takeout or delivery, the customer places their order, pays with a card over the phone. If it’s a delivery order, a number and address is recorded. The order ticket prints out at the hot/cold and pizza stations. The cold chef wears gloves and a mask. The pizza makers only wear a mask because by the time the pizza is through the 500 degree conveyor oven, no germs have survived.

“When the pizzas come out, no one ever touches them,” Melissa said. “ They use a peal to take it out and put it in the box.”

When the customer order is ready, a gloved and masked employee will bring the food outside and either hand the food to the customer or place it on a table outside the back entrance.

If it’s a delivery, the person on behind the counter will hand the food to the driver, who will drive to its destination, contact the customer and leave their order outside. 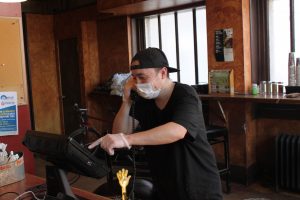 Ricky Yee puts in an order 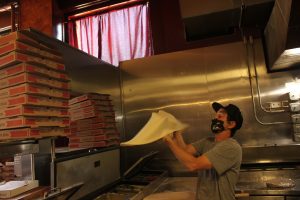 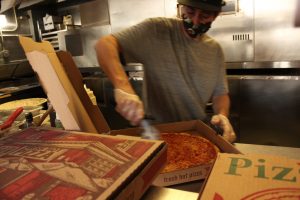 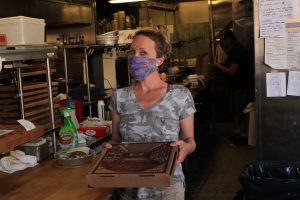 Jenny (a manger) puts together an order

With all this positive work, nothing is set in stone.

In Alaska, the state is allowing 25% capacity of business in restaurants. However Alaska doesn’t have neighboring states to spread the virus. Vermont is a neighboring state of two places with a lot of Covid-19 and Melissa’s idea of business has changed throughout the past few months.

“As soon as this emergency stay at home order was lifted,” Melissa said, “I thought we would be allowed to open a reduced capacity (25-50%)”

On Monday, June 4, Melissa is opening parklet seating and welcoming back a server. This summer is going to be a lot different than other years.

“It’s gonna be a lot longer than I thought,” Melissa said. “I knew it wasn’t going to be a busy summer. But at least it will be something.”

Through it all, the community has been very supportive of its local business and has helped Melissa and Positive Pie stay in business and stay positive.