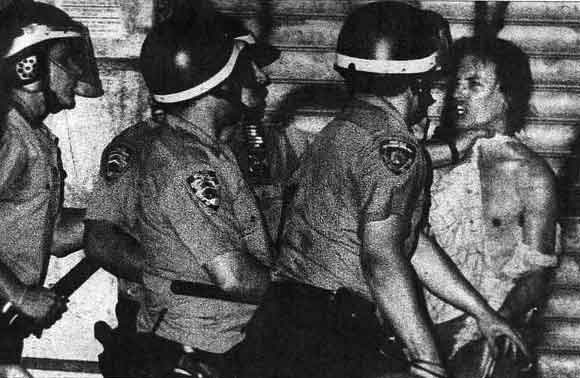 On the 6th of August 1988, many newspapers like the New York Times published stories about the previous night at Tompkins Square Park in New York City.  As the Times described the events, “[m]any of the officers concealed their badges to protect their identities as they indiscriminately clubbed and beat protestors and uninvolved bystanders without arrest.” 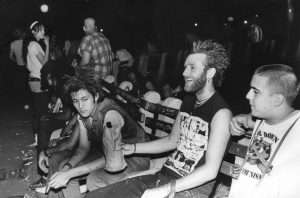 Jessica Levi is quiet now, beginning to tell her story from a night she remembers 32 years ago. Unlike many others watching the riot unfold from the comfort of their own homes, Jessica was out in the night full of anger and violence.

Jessica Levi was eighteen at the time, living with her mom. Her father had passed at a young age. She had grown up in the city spending time at the park with friends. She lived on the East Side, what her and her friends called “Alphabet City”, just minutes away from the park. She grew up in a world full of culture.  She was always interested in what happened to her world was determined to make it a better place. 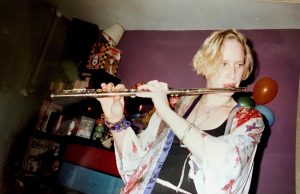 In 1970 the gentrification of New York was in full force. Rent control, a government created regulation to control the amounts charged for rent, was brought to the East Side in the hopes of creating an easier way for people of lower incomes to live in the city.  Instead the rent was raised by 20% whenever a tenant left the rental. Many of the people who could afford to stay in their homes were upper or middle class.

Then President Reagan shut down the local mental hospital, along with many others. It was a movement in the time to get rid of many mental hospitals, hoping to deinstitutionalize the people staying there. Many of the patients became homeless and chose Tompkins park because it was a safer place for them, leading to an increase in homelessness in the East Side.  The people on the community board decided to institute a curfew in order to solve the problem of the “unsafe” park.

The curfew for Tompkins Square Park was put in place on June 28th, 1988. It was set for 1 am. Anyone left in the park after that time would be evicted by police.  The first protest against the curfew, on July 31st, was mainly peaceful and not many people attended. The attempt was not a success.

Jessica planned to go to the next one. Not only had she grown up in the city but her friends were part of the people getting bumped out of the East Side. Jessica knew it was time for a change.  A new protest was organized, set for the 6th of August.

Tent City After the protest

On that night Jessica and many others gathered at Tompkins Square Park at 11 pm. They planned on having a peaceful protest that would hopefully sway the people in charge of the curfew to change their minds. Around midnight most of the police force showed up in full riot gear. Many had their badges covered.

Everything went from peaceful to a full-blown riot in a matter of seconds.

“There was never a time of ‘hey quietly go’,” Jessica remembers, “it was just the police starting to grab people and beating them up.”

Jessica realized that if she did not leave the vicinity of the park and the violence, she would be thrown into it. “I steered myself and my friend very quickly out of the park,” Jessica remembers, “and sort of across where all of the chaos was coming down the street.” 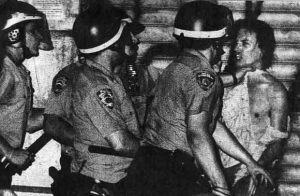 Many reporters were victims as well. Around 50 people were reported injured, 13 of these being police officers. Many of the reporters in attendance got photographic evidence of the police beating protestors, which would later be used in the hearings.

On the way out of the park, Jessica witnessed things she would never forget, like grabbing a person and shoving them out of the way of a police horse.  Everywhere she looked people were getting hurt or beaten. Anyone walking on the streets was fair game. Friends of hers coming out of restaurants or pubs would get thrown into the violence.

Slowly Jessica and her friend assembled a group, hoping that traveling with more people would protect all of them from the rioting. “Now it wasn’t just me and my one friend now it was about twelve of us,” she remembers,“we’re moving through just trying not to get caught and hurt.” They made their way towards a different end of the park, far away from the fighting.  It was 1:12 then, they had made it past curfew in the park.

Jessica realized that it was not safe where she was, and decided to go with her friend, hoping to find a place to wait out the night. “It was a warzone outside,” she says, “unsure which way to go.”

Turning down streets avoiding the violence and witnessing police horses trample people, and police officers using their nightsticks to beat people. The city she grew up and lived in was unrecognizable to her.

“When we were near the Pyramid Club,” she remembers, “one of the bouncers physically pulled us inside, shutting the door and going back to the window, on the watch for more ‘survivors’.” Amid all of the violence, there were people banding together to help others stuck in the riot. 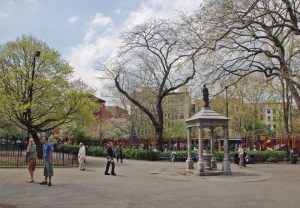 Waiting out the violence Jessica surveyed the club .“It was very surreal inside,” she says. “Everyone was sitting stunned; barely speaking. The bouncer gave regular reports of what happened outside. Each new person that entered would have a different horrible story to tell.”

There were helicopters flying so low trees were whipping around. The whole city felt like it was crumbling.

After four hours in the club, Jessica and her friend decided to depart. It was around 6:30 in the morning, sunrise. There was no one in the streets.

“There were cars on fire,” she says “Store windows were smashed. Mostly it was eerily quiet. In the ½ mile or more walk, we didn’t see another soul.” The riot had made people disappear into their apartments. On a normal city day there would have been many people out on the streets going about their days. It was like everyone was defeated.

“You don’t fight back from it,” Jessica says, even if you feel that way, you can’t… so the game is just survival.” Jessica felt like she didn’t do enough, but also knew when she was walking home that there was nothing else she could have done.

Later in the day almost every news station on TV was playing out the reports of the injured and what happened following the event. There were more than 100 accounts of police brutality reported, days after the violence done by the police it was brought to trial, after 8 months only 17 names were listed as suspects out of the 440 police officers in attendance of the riot, mainly due to the investigative force being officers. Only 11 out of the 17 were charged with misconduct.

After the protest the curfew was revoked for three years. Tent city (the nickname for the homeless encampment the people had created) remained.  After going through the proper channels the board enacted the curfew, shutting down tent city for good.

This time there was no protest. After everything the city had gone through, nothing changed. The gentrification to the East Side continued, as did the police officer’s misuse of their power. 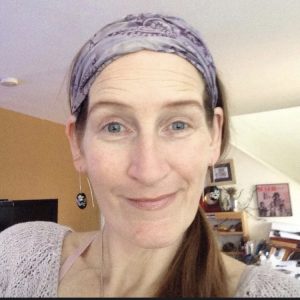