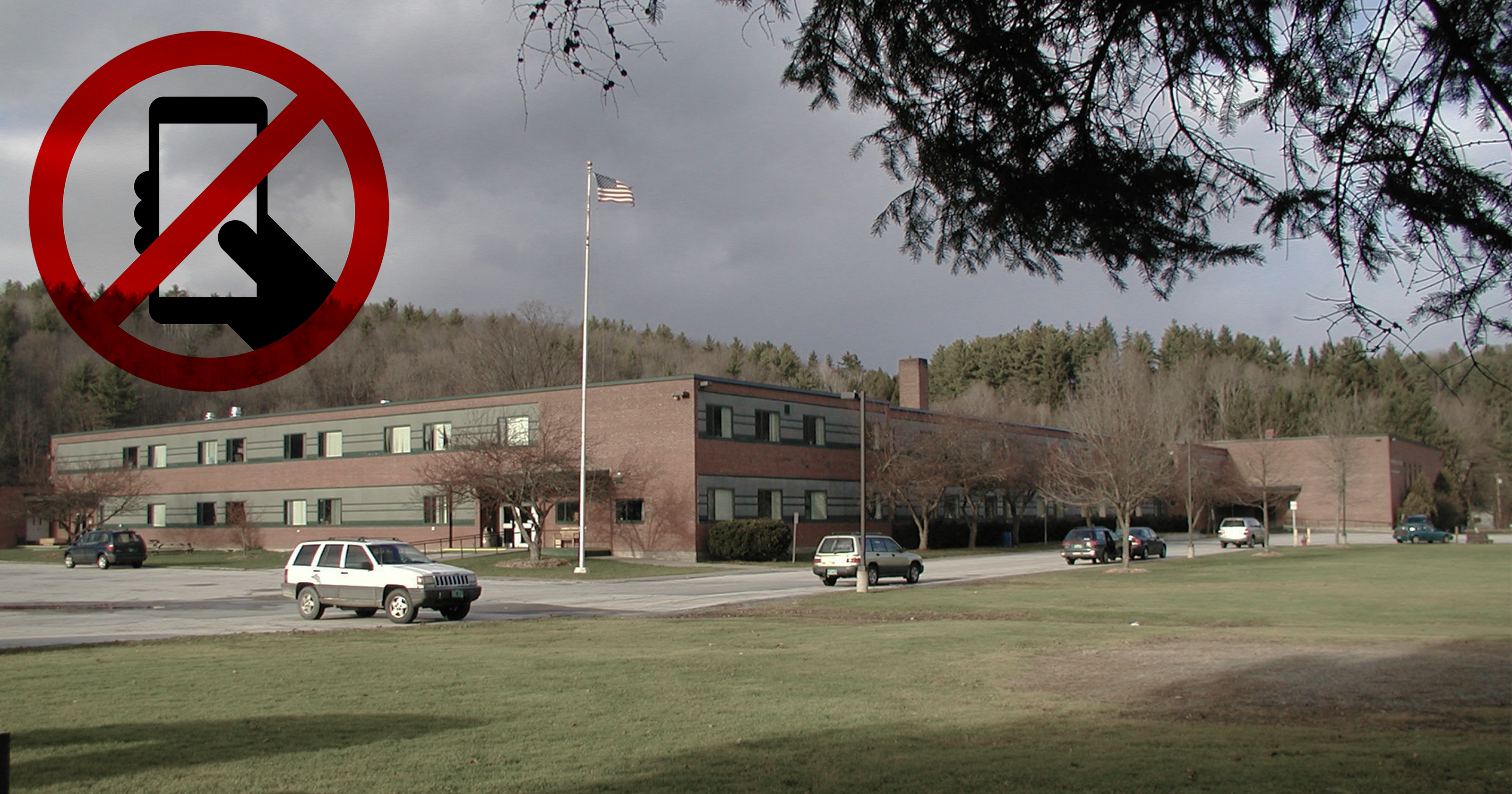 You are allowed to use your phone during passing periods, recess, and during lunch but ONLY in the cafeteria. The phones are expected to be turned off and are supposed to be stored in your backpack or your locker. You are in no way allowed to use your phones in bathrooms or locker rooms. You can get your phone taken away up to three times, before having a meeting with your Jen Wall-Howard, and your parents.

Some teachers are allowed to institute a “cell phone/device collection station” this would be in their classroom, and would hold phones until the end of class.

With the phone policy students are socializing more, and they are talking face to face. Teachers have also noticed that students seem to be more engaged in classes now.  But some people have mixed opinions on the policy.

Before the policy, MHS already had “yondr pouches”. These are phone sized pouches that sit on your desk with your phone inside until the end of class. 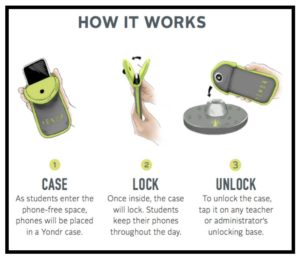 “You could get away with your phone being either on top of the pouch or under the pouch,” said Meadow Ingraldi a MHS senior. “So they wouldn’t really know.”

“I feel less distracted now, because I know what will happen if I take out my phone,” Meadow says. “If you’re using your phone in class, the teachers can and will take it away.”

Another senior at Montpelier High School, Shyloh Wondermaze, believes the policy is not working.

“Right now the phone ban is unrealistic and not super enforceable,” Shyloh said. “Some students would use their phones in class or get distracted by it.”

Shyloh says a lot of teachers are tired of taking phones and have given up.

“It depends on the teacher really, I think most teachers are tired of constantly having to enforce things like that, so it is not really followed often,” Shyloh said. “They just ask you to put it away, they don’t take it or anything.”

Shyloh has even had times where her phone was taken away outside of class. She was confused as to why, because she thought she was able to have her phone when not in class.

“There have been times where I have gotten mine taken,” Shyloh said.  “It hasn’t been in a classroom setting, where it would be deemed to be distracting.”

Jen Wall-Howard has seen students sneaking their phones or being on them when they aren’t supposed to be. “The cell phone gets taken away and you can pick it up at 3 o’clock in the office,” Jen said “We put it in a safe place in an envelope with your name on it and it’s in a drawer.”

A lot of teachers have a hard time taking away phones. “One thing that we are finding is that there isn’t an adult in the building that likes saying ‘hey give me your cell phone please’,” Jen says “It’s easier to say ‘hey put your cellphones away when you walk into class.’”

One teacher, Jerry Tillotson, has phone pouches hanging on his wall. The pouches all have numbers on them. Next to the pouches there is a list of names for different classes he has, with each student’s assigned number on it. Every time the students go into that class they have to put their phone in their pouch. 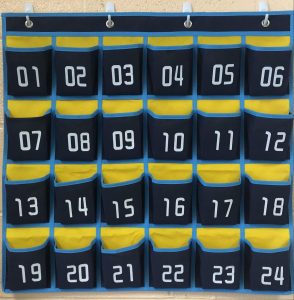 “One challenge is consistency of enforcement, just like any other policy,” McLane says. “Teachers have a relationship with students and have noticed that asking many times and taking phones has caused tension.”

On the other hand, McLane said that before the policy was put in place, students were having more digital conversations rather than face to face conversations.

“What happens now when you walk in the library you see people doing puzzles, and collaborative work, It is a very different atmosphere.” Matt says “A lot of the students I have talked to appreciate the intentions behind it,” Matt says “but feel that it is a little too strict, and would like to be able to loosen up the restrictions.” Students want access to their phones when they aren’t in class. This means free blocks and lunches.

One parent, Caroline Butler, agrees with the policy in one way, but not in another. One day there were reports of an active shooter on the State House lawn. That same day, Caroline’s daughter Meadow had her phone taken, but Caroline didn’t know that.

“I didn’t have any idea what was going on, other than getting the robo call that there was an active shooter, and the school is on lockdown,” Caroline said. “I couldn’t reach her. I didn’t know what was happening.”

Luckily, Meadow was able to contact her mom through a friend’s phone. Caroline thinks that having the phone policy is good in a way because the kids aren’t using them in class, but it is not good because there could have been an emergency.

“If something did happen to Meadow, or she needed help or had to call someone, she wouldn’t have access to her phone,” Caroline says “Taking them away is a risk.”

Caroline now knows when she can and cannot contact Meadow.

“I am very aware of when I can text her,” she said, “so she won’t get her phone taken away.”

Could a policy like this work at U-32? U-32’s Associate Principal Jody Emerson, believes that a phone ban is not the right choice. “I guess I could imagine it, I don’t know how well it would work,” Jody said. “I don’t see it as the right path for a school.”

There is one phone policy already in place at U-32 , but it is only for middle school students. Middle school students aren’t supposed to use their phones from TA to the end of the school day. “The hardest thing is that when we get to that third time that it has been taken away, the parent has to come and get it,” Jody said. “The parent will come get it, and give it right back to the kid the next day.”

Zach Gonzalez, one of U-32’s social studies teachers, can’t really see a cell phone ban happening at U-32. “Banning stuff outright often gets pretty strong reactions,” Zach said. “I think that turning back the freedom you have here with a full ban would be difficult, it would take a lot.”

It would be hard trying to get teachers to take student’s phones away. “A lot of the responsibility is on teachers, and truthfully I don’t feel like taking anyone’s phone away,” Zach says. “I would just prefer not to do that.”

Logan Carbo, a U-32 senior shared his view on a phone policy, “People would actually riot.” 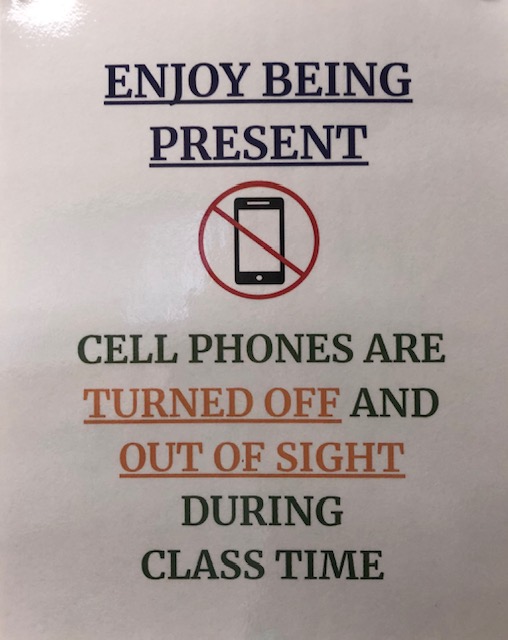