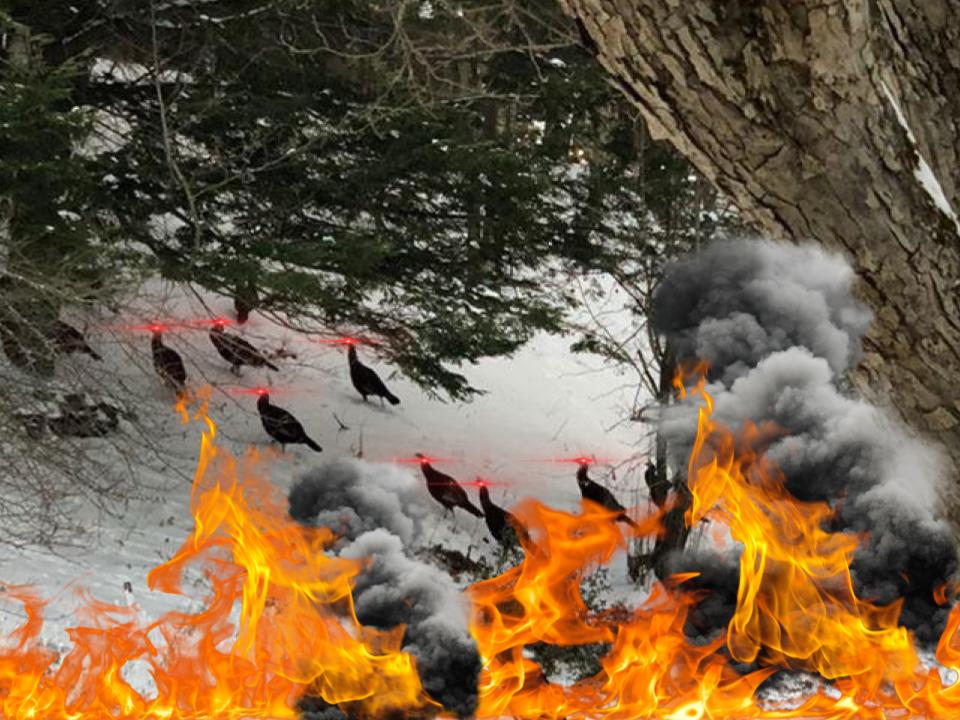 “He moves like a bird, lightly bobbing his head. You stare at him, and he stares right back. And that’s when the attack comes, not from the front but from the side …from the other two raptors you didn’t even know were there. Because Velociraptor’s a pack hunter, you see, he uses coordinated attack patterns, and he is out in force today.

“And he slashes at you with this; a six-inch retractable claw, like a razor on the middle toe. He slashes here…or here…or maybe across the belly, spilling the intestines.

Point is, you’re alive when they start to eat you’’ -Alan Grant, Jurassic Park

In Jurassic Park, Alan Grant describes the velociraptor as a “six-foot turkey.’’ – here, however, we describe turkeys as “2-foot velociraptors’’. The birds have allegedly wreaked havoc in our state and earned the ire of many in the U-32 community.

U-32 Spanish teacher, Adam French, is a typical victim of this havoc. It happened in his garden “I put a lot of care into blueberries,’ French said. “Last year I froze 5 gallons of them’’. However, this day would be different. Adam says that on the very day he hoped to harvest his berries, something went awry.

“This year, just as they were ripe, my little boy says, ‘look, turkeys!’. The bush was picked clean. All gone,” Adam said. “Those bastards ate my blueberries’’. Turkeys aren’t your run-of-the-mill sparrow or cantankerous barnyard rooster. No, these birds are forces to be reckoned with. Males can weigh close to 37 pounds, with females not far behind. Their heads are bald like a vulture, and sport various knobs of flesh jutting out at odd angles, a powerful sharply-hooked beak, and a reptilian dewlap (long flap of flesh) that hangs from the neck. Resting on each scaly foot is a knifelike spur, each one measuring up to 2 inches long.

From their beaks come the (in)famous gobble-gobble, every now and then followed by a sharp yelp or a low growl. Sounds like something from Jurassic Park, doesn’t it?

Well, technically it is.

Yes, the pint-sized velociraptor and others are extinct, but some dinosaurs remain – avian dinosaurs, to be exact. The dinosaur in question is none other than meleagris gallopavo, or as others call it, the wild turkey. And they not only inhabit Vermont, they thrive here.

The birds have exploded in number; in fact, modern-day estimates put the VT population at a record high. This extreme number has rebounded from almost-extinct populations. As hard as it is to believe, by 1854, wild turkeys were extirpated from our state entirely, due to being considered pests and due to deforestation. The National Wild Turkey Foundation (NWTF) was founded in 1973, when around 1.3 million of the birds inhabited our country. After decades of dedicated conservation, research, and education, the number of total turkeys has gone up nearly 7 times! Thanks to extensive restoration efforts, however, they have rebounded to more than 45,000 dinosaurs that Vermonters regularly interact with to this day.

These interactions have undoubtedly boosted the turkey’s rise to infamy.

Turkeys aren’t the best neighbours. Mobs of turkeys, up to 50 strong, overtake parks with ease. They can charge anyone who offends them; they skirmish with other poultry that get in their way; they make short work of gardens; they defecate on porches; and (if this YouTube video is to be believed), even attempt burglaries.

It’s no surprise turkeys have a bad rep in our state. However, the turkey does have a few followers. Some people welcome them, believing the birds rid their property of smaller, less-desirable reptiles as well as other pests. The author himself even considered getting one as a pet!

Even though Turkeys are considered an evil pestilence, they are a welcome sight in my backyard. Their presence proves that there are some parts of our state that are still truly wild. The turkey, and other dinosaurs like it (such as the loon, whose unearthly cries can still be heard echoing across our lakes and rivers) are reminders of an era long gone; a reminder that nature will always prevail.