The Climate Encampment: Did Anyone Even Care? 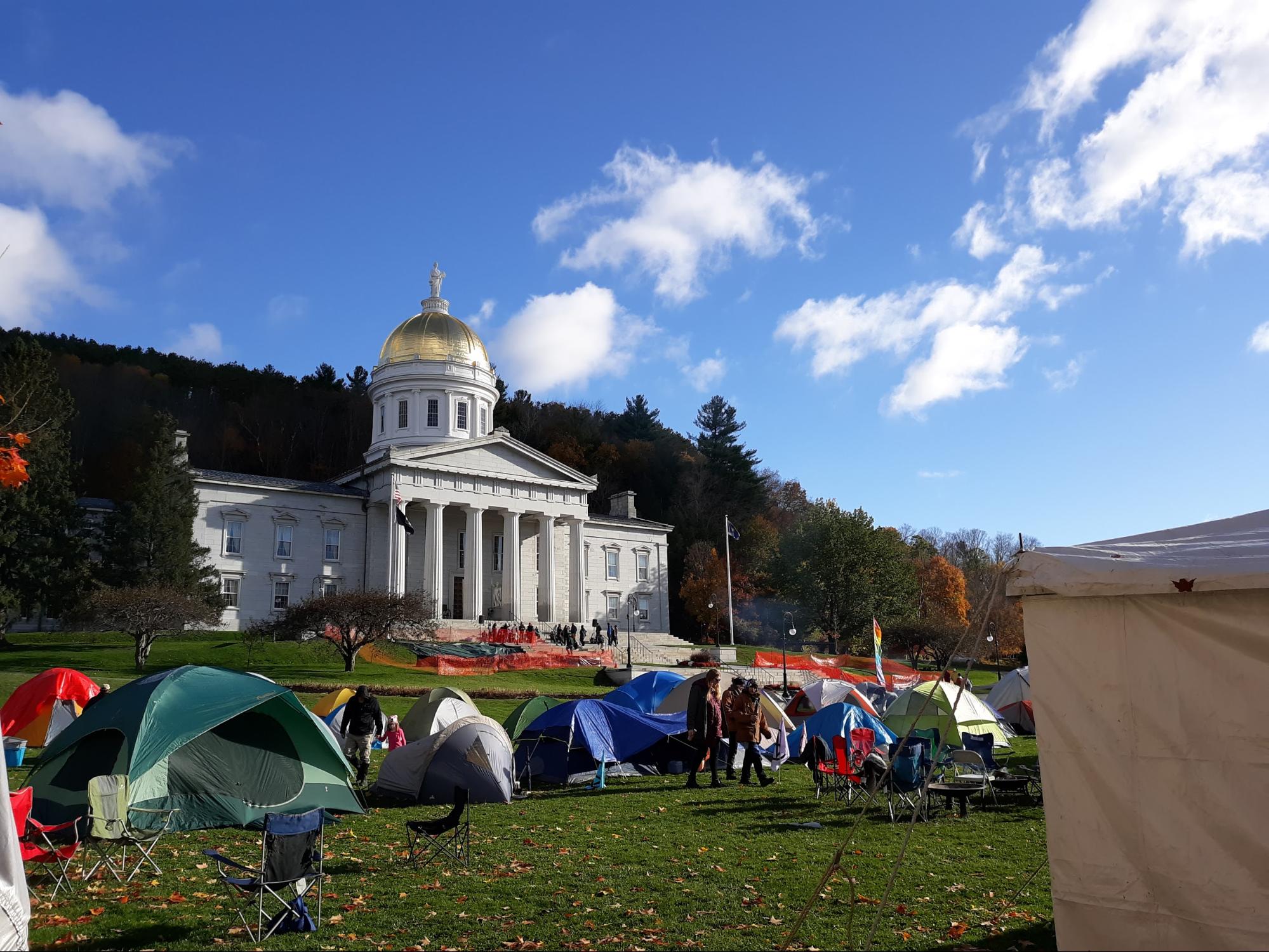 Everything about the Climate Encampment was against the rules. They didn’t have permits to set up their tents. They secured their tents to the trees. They took over the street. They even kept 100 chickens on the State House lawn. They broke almost every rule in the book. 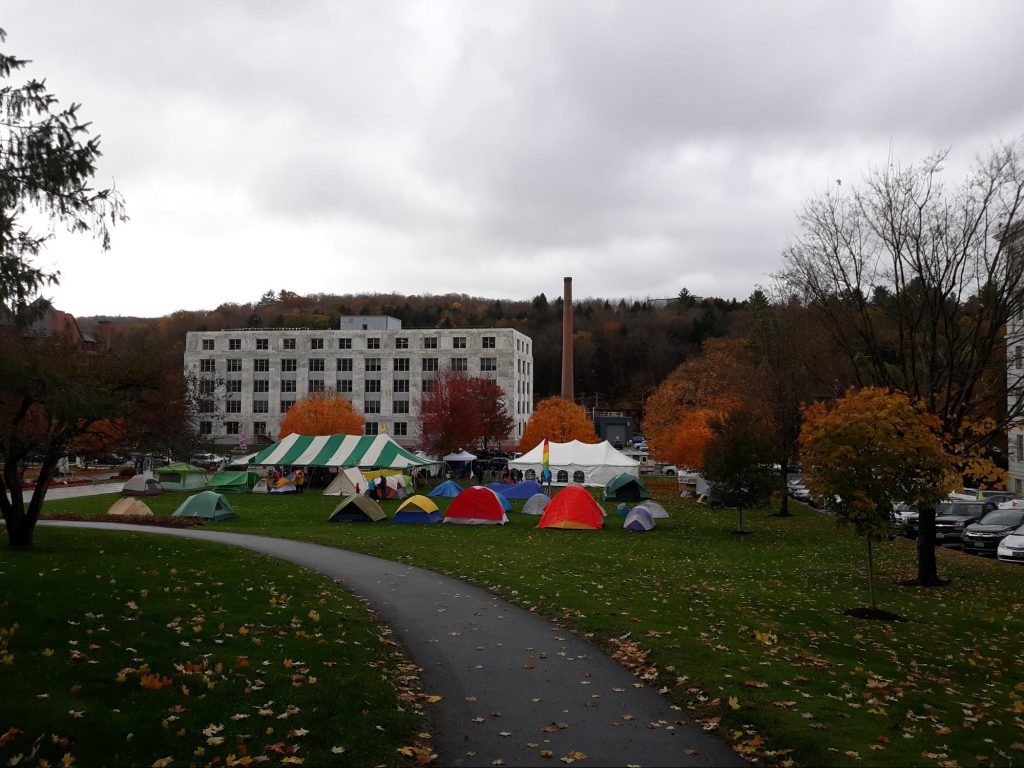 For those who don’t know, the Climate Encampment was a three-day event from Thursday the 17th of October to that Saturday. A whole lot of people decided to camp out on the State House lawn and protest climate change. I got to attend on Friday and Saturday.

After I arrived I caught the end of a youth workshop. It was taking place in the State House cafeteria. A group of youths sat around a table while an Encampment organizer in his thirties named Henry taught us how to talk to law enforcement officers. He walked us through how police would use tricks to try and get suspects to share information. The workshop ended with an interesting skit where Henry, playing a cop, got one of two suspects, played by people attending the workshop, to confess by pretending to let the other go.

After that I attended a workshop on Nonviolent Direct Action. It was held in the Unitarian Church. As I walked to the church I noticed the lone car with the words “Security” written on the side. The guard inside seemed to completely ignore the people in the Encampment.

The training was focused on how to plan and perform a Direct Action for a specific cause. We brainstormed Direct Actions for the Encampment and were told that the group of people there would have to perform one.

After that we modeled barricading a street.

We split into two groups and the groups lined up facing each other. One group got to be people blocking a street, and the other was a group of angry motorists. I walked up to my partner and screamed as loud as I could, “WHAT THE HELL ARE YOU DOING!!”

My partner just stood there looking apologetic. I continued to yell and rage until we switched roles and he took his turn talking to me.

The security guard stepped out of his car, looked around, and stepped back inside. 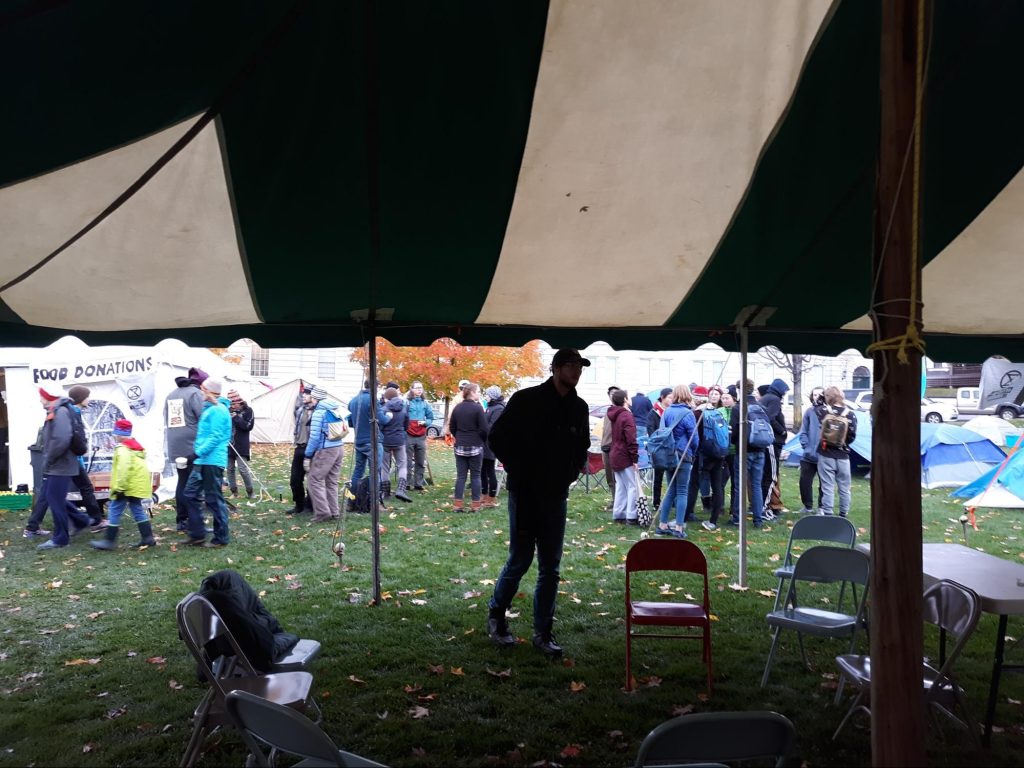 People started to eat dinner in the street. I was told that officials were aware of the street dinner, but no one had asked permission.

After dinner, I started dancing. Eventually, I retired to my tent to sleep, but the dance party continued long into the night and moved around the town, taking up the street.

The first thing I noticed when I woke up was the music. Not the 80’s pop-rock of the Encampment dance party, but the smooth low tones of Christian music.

I realized that Tent America had arrived.

Tent America is an evangelical Christian organization that on October 19th set up tents in all 50 state capitols with the goal of making Jesus go viral again. They shared the State House lawn with the Encampment on Saturday. 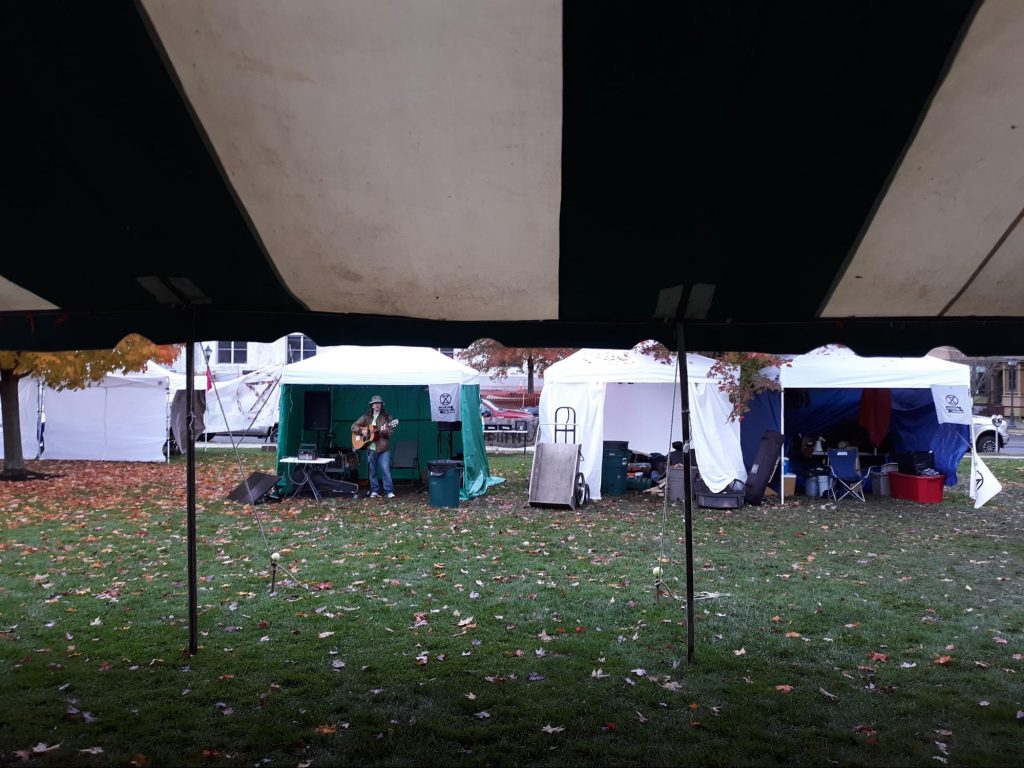 In the morning, organizers held a People’s Assembly. People gathered on the State House steps and brainstormed ways to combat climate change. People broke into workshops or listened to groups like Migrant Justice make speeches.

I stayed at the Encampment until around 2:00, listening to speeches, wandering around, and talking to other people. I didn’t hear anything about the Direct Action that we were supposed to do, but maybe I just wasn’t asked to participate. I also didn’t see any law enforcement. When I eventually left, I looked back at the State House lawn.

Seeing the sprawling Encampment and large banner next to the colorful canvas of Tent America I couldn’t help but wonder: did anyone even care? 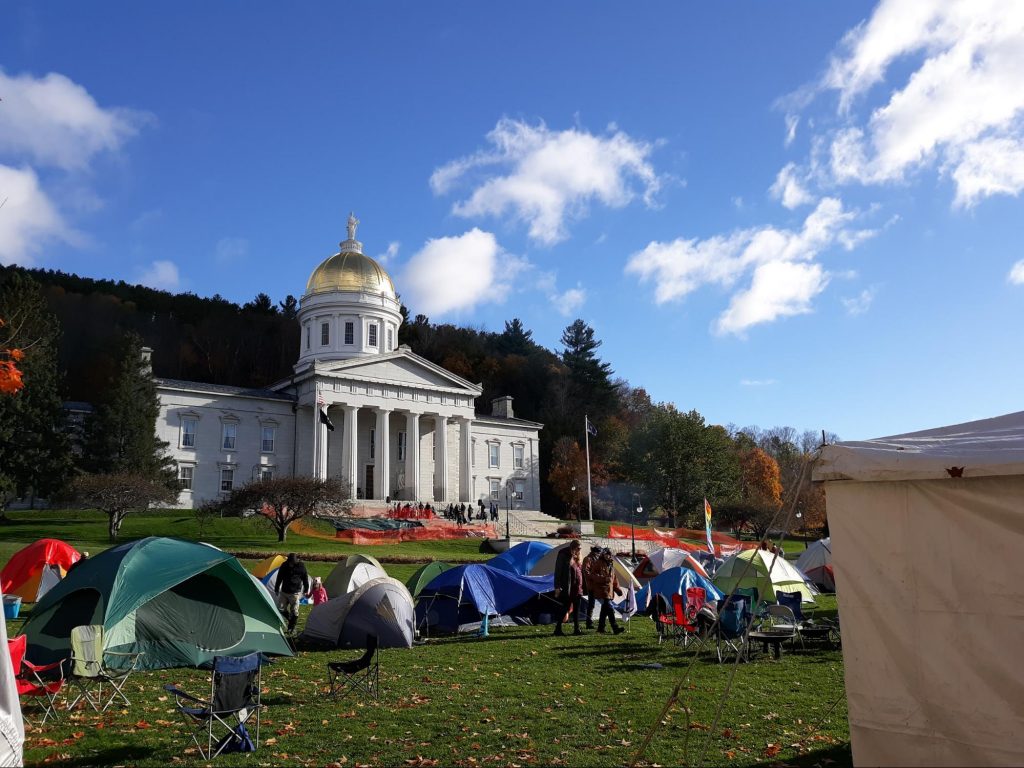