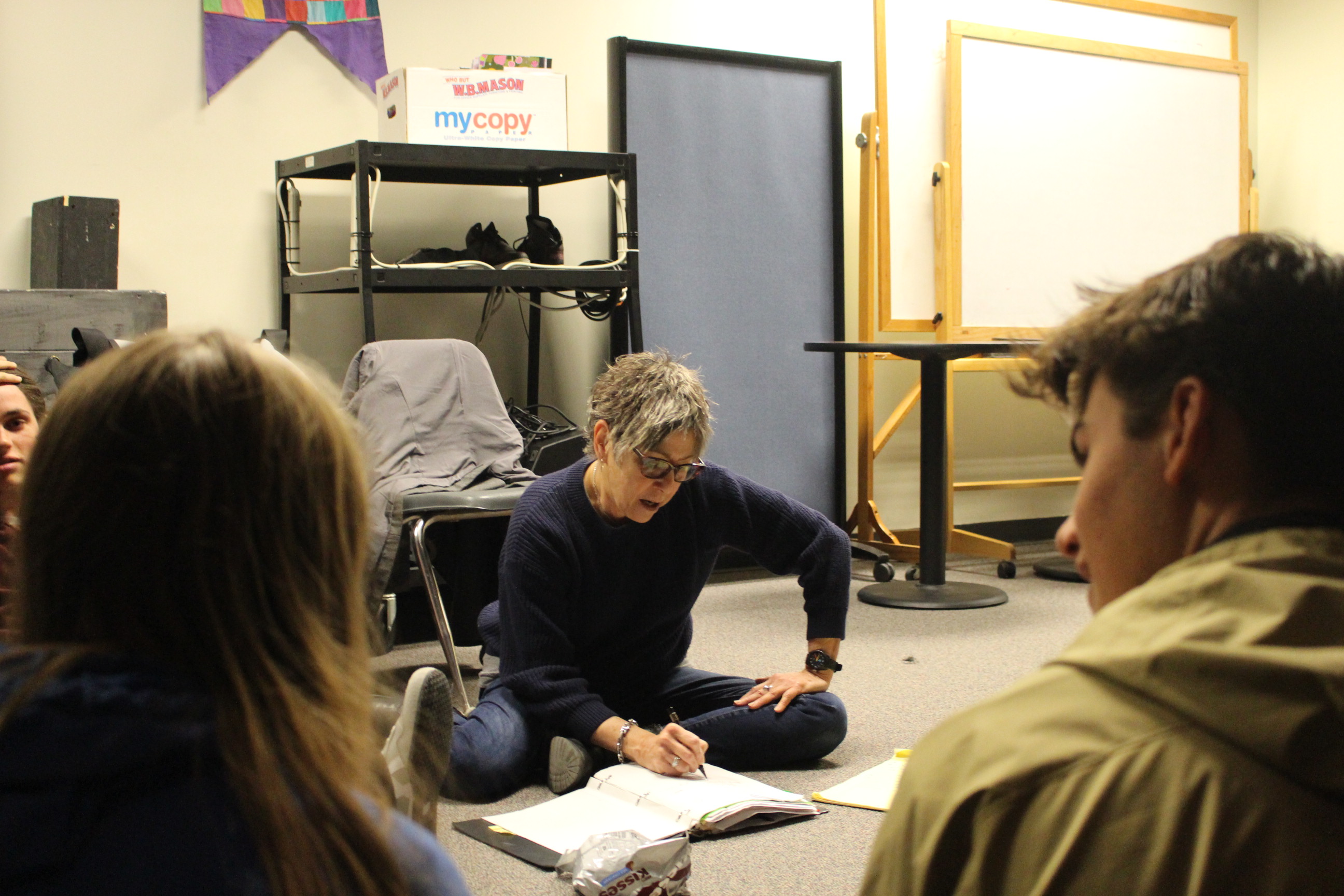 This is installment 2 of 3 of the Legends series 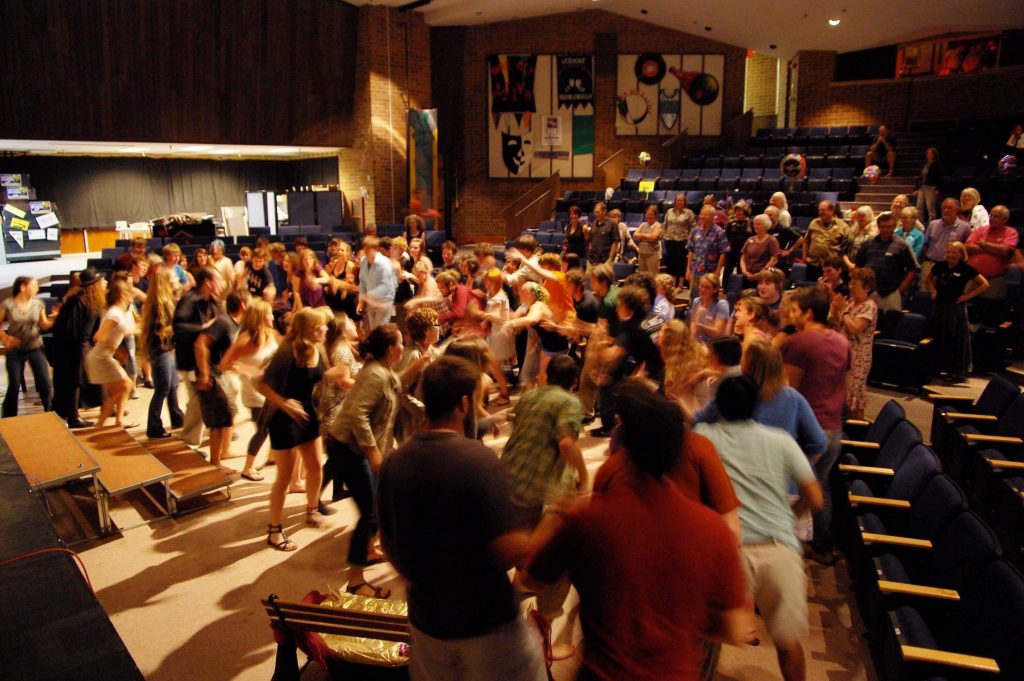 Eight high schoolers, all wearing shirts bearing the words “Acting Up” in bright yellow, crawl around on their hands and knees, pretending to dig in the dirt. They say things like, “We need to find the treasure!” and “We’re going to be so rich!”

They face a makeshift audience, constructed out of rows of chairs. After a beat, one of them says, “Oh no, I lost the treasure!”

The joke gets an awkward laugh from the eighth graders of the Aramis core, sitting in the rows of chairs.

In the back of the room, leaning against a door frame, a short woman in her 60’s laughs as she rings a little bell, signifying the next round.

Most kids don’t know Joanne Greenberg’s name, but from the late ’70s to the 2010s she was a U-32 powerhouse. In her time here, she went from being a young teacher to a strong, groundbreaking woman in our community.

When the callback bell rings, Joanne huddles all the group members in a corner of the classroom. “That was really good,” she says with a big smile.

Right before she was going to retire, Joanne realized that the upperclassmen were an unrecognized “gold mine” for the middle schoolers. She thought the upperclassman could be mentors for them. She wanted a way for middle schoolers to see that older kids can take risks and mess up too, and that’s where the improv part came in. “Acting Up.”

“When they can watch older kids doing that — and sometimes, you know, not having a joke land, or looking goofy and just shrugging it off — it’s awesome for younger kids to see that. It’s worth taking a chance.”

Joanne still meets with her Acting Up group every week, Oreos in tow. She laughs at the retelling of their English class that morning and plays improv games with them.

“I like that she’s our friend rather than our teacher,” says troupe member, Kate McKay. “She really wants us to do as much as we can with it.”

Joanne wasn’t always the strong woman she is today. As a kid, she grew up in New York City, accompanying her parents to plays, and dreaming of becoming an English teacher.

After graduating from high school, she went to the University of Chicago for East Asian Studies. After college, she moved to Vermont to student teach at U-32. When she finished student teaching, she made her rounds at the other schools around central Vermont, but she knew U-32 was where she belonged.

The more Joanne taught, the more experience and drive she possessed. Her experiences began shaping her into the woman she is today.

One day in the mid-‘80s, Joanne was sitting in her classroom grading papers when she heard a commotion in the atrium. When she went to go see what was happening, she found a crowd of high schoolers all in the center of the atrium, circling two girls who were in a full out fight.

Joanne didn’t see any other teachers around. She was a relatively new teacher, only 5’6”, and these girls were in a tear your hair out fight. She had no idea what to do. Then, before she knew what she was doing, she stepped into the circle.

She went up to the bigger of the two girls and in her loudest voice said, “You don’t need to be doing this!” Complete silence fell over the crowd. Joanne was terrified the girl was going to punch her in the face. But she didn’t. Instead, the girl stopped fighting, and said, “you’re right,” and walked away. Joanne couldn’t believe it.

In 1977, there was finally an opening for a full-time teacher at U-32, and Joanne grabbed it. When she first started teaching, Joanne taught a reading class part time with her now close friend Liz Snell. Through the years, she inched her way into the English department, teaching classes like Public Speaking, Poetry and Song, and Women’s Lit, eventually teaching higher level classes like World Authors and Journalism. 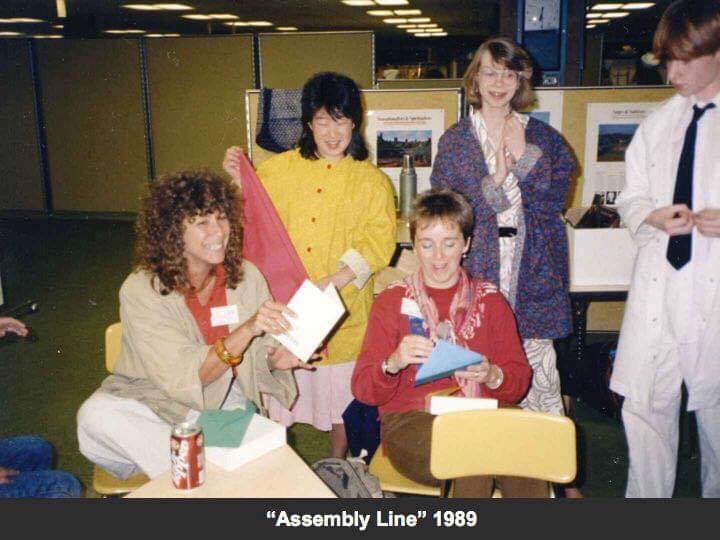 Joanne was not the kind of teacher who could be fooled by a lie about your dog eating your homework. She expected only the best from her students.

“She really pushed us,” Jenn Ingersoll, a former student, and current teacher at U-32 said. And if they didn’t deliver, she called them out. “I wanted to work hard for her,” Jenn said. “She made us want to do our best.”

Even in theater rehearsals, Joanne showed her trust and passion for her students and actors. She knew what they were capable of and they knew they better deliver.

Maren Langdon Spillane recalls one day in rehearsal she and another student actor were supposed to kiss during a scene: “Joanne told us to go down to the music practice rooms and figure out when and how the kisses were going to happen.”

Maren said Joanne “wants and loves input from the actors, and values their instincts.” Joanne doesn’t have time to waste on drama. She knew the scene was intimate, and she was cutting out unnecessary drama before it began. “She was telling us to focus on what was actually important.”

Joanne brought a powerful and groundbreaking presence to the theater. She pushed the envelope with controversial plays and breathtaking performances. One play that exemplified this was a one-act called Survivor. It was about the beginning of WWII and the Warsaw Ghettos in Poland.

“I remember walking into the theater,” Ellen Cooke says, recalling the play, “[and] in all the gallery spaces in the theater there were old pictures and artifacts of people.”

Joanne created a space for students and family, some with stories from the war, to share their experiences.

Joanne’s reputation at U-32 was becoming more courageous with every passing year. Her belief in not shying away from the truth shined through in the classroom, theater, and the newspaper.

People may know the room in the back of the science lab as a closet with chemicals and lab equipment, but Joanne knew it as the U-32 Chronicle office. Every week, Joanne, Steve Barrows, and a team of Chronicle editors worked until 9 pm, putting together that week’s newspaper by hand.

Joanne believed, and still believes in the ethics of Journalism, the right to free speech, and freedom of the press. She taught every Chronicle writer the importance of their words, and their right, as active citizens, to speak out when they saw something unjust. This motivation brought the Chronicle many awards from places like Columbia School of Journalism.

Joanne was proud of the muckraking work the Chronicle was doing, and she was not going to let it get squashed by the school. On multiple occasions, Joanne was called into administration for something the admin didn’t like, and she told them every time, she didn’t care.

One year, a new principal was hired, and he wanted to reward students, not just stand-out ones, for everyday nice things they did. In theory, this worked, but in reality what he did was call everybody into the auditorium and hand out hundreds of green certificates.

“At the end of the assembly, hundreds of green papers were scattered all around the floor.” The Chronicle wrote an editorial about it called, Thanks, but No Thanks. The next day the principal walked right into the student editor’s classroom and yelled at the author in front of the whole class.

Joanne was teaching British Authors at the time, “I could hear him down the hall, yelling.” Joanne went to confront the principal about his actions and she recalls him being, “wounded.” She understood why he did what he did, but he had to understand that what he wanted was censorship of the Chronicle’s words. “I had to explain that, no, we’re not going to show you the paper.”

Every student, teacher, and person that met Joanne was impacted by her drive and love for them. They fell in love with her fierceness and her courage. She wasn’t afraid to say what she believed and that determination made her an everlasting presence at U-32.

On 9/11, everyone was called into the cafeteria, where they received the news of the terrorist attacks that had struck New York. Joanne was having a visibly hard time with the news because she had friends who worked on wall street. Then a student from one of her classes came up to her and handed her this “big clunky thing.” Joanne recalls she was having difficulty with this student in class, but “he could see in my face I was really worried and handed me the big lumpy thing and he said, ‘this is my cell phone.’” He showed her how to work the phone, and said, “keep it, give it back to me when you can.” 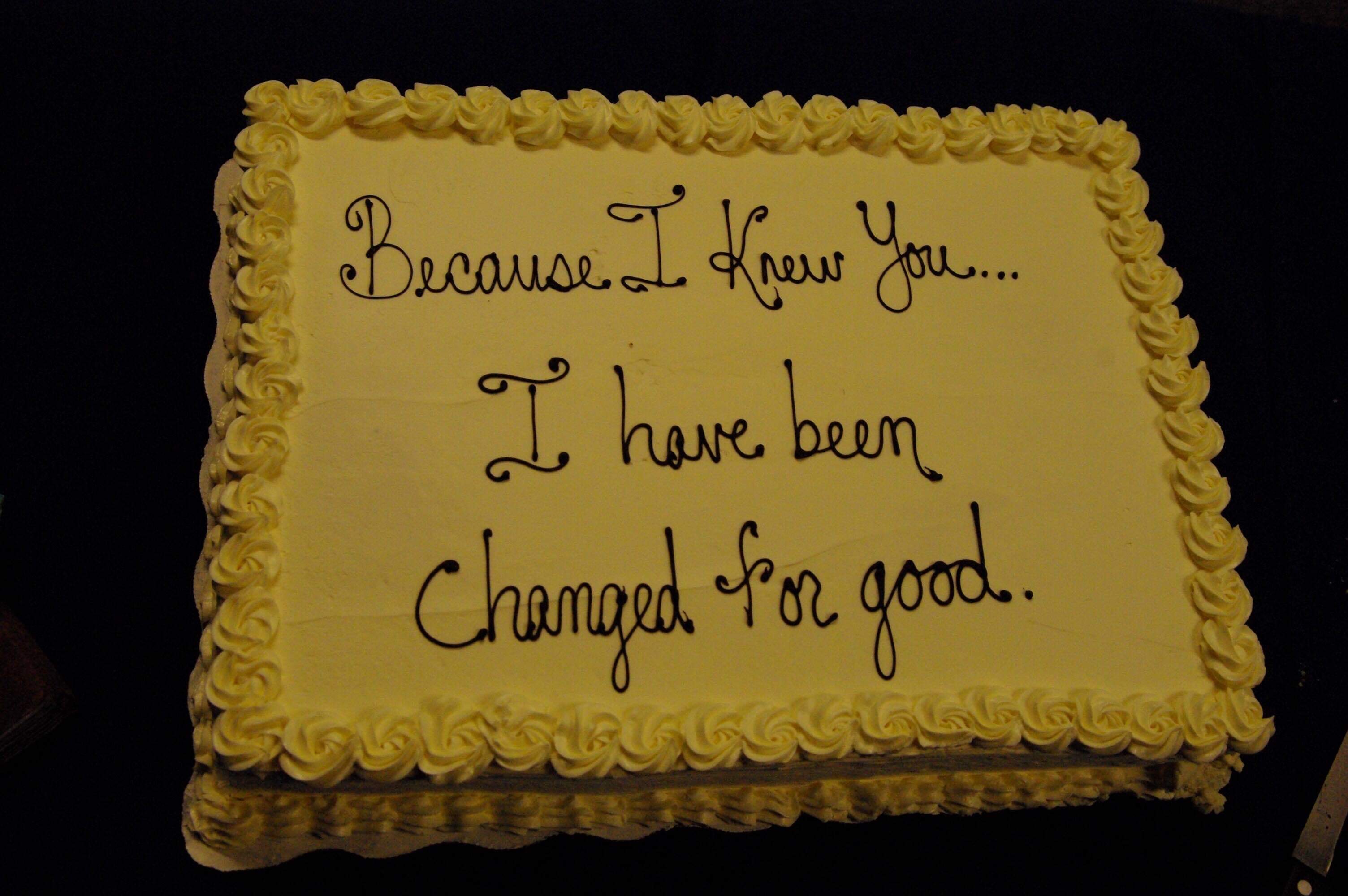 Next in the series: Jeff Danziger