“I Hope To Give Back”: A Story of Homelessness 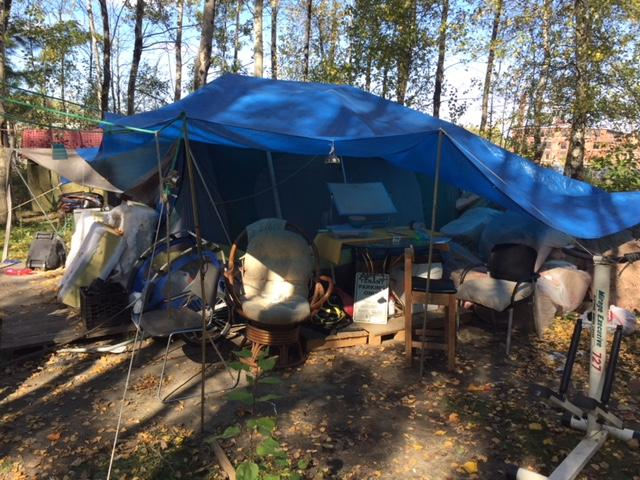 Editor’s Note: The homeless individual in this article wished to remain anonymous, so their name has been changed.

One night last year, Steve walked into a small town in northern Vermont. He began to look for a place to sleep.  There was no emergency housing within the little town. Steve began to wander until he was too tired to walk anymore, finding a bench to rest for the night.

“I walked until I was too tired to walk anymore,” Steve said.  “It’s not like you really sleep because you are always on edge.”

Steve is one of an estimated 1,300 who face homelessness in Vermont, and the issue is becoming more and more prevalent.  The Ames Plaza, on the Barre Montpelier Road, is home to Price Chopper, TJ Maxx, Dollar Tree, Petco and Staples.  As you drive past the stores, you can see the train tracks running across the river. Behind the tracks, blue and grey tarps hang from tree branches.  A group of around 20 homeless individuals have lived there for many years. Community members are asking, is this issue getting worse?

A homeless encampment in Berlin

Substance abuse and mental health problems affect many homeless individuals like Steve.  According to the National Coalition for the Homeless, 20 to 25% have severe mental illnesses, compared to 6% of non-homeless.  Over the past 10 years in Central Vermont, people began to notice panhandlers on the corner of streets and highly travelled areas.

Steve’s story is not as uncommon as you would think.  He was born in Northfield, Vermont. He grew up with two parents and a brother.  From the outside it looked like a supportive, loving family; however that was not the case.  His Mom and Dad were both alcoholics, and his brother was abusive.

The issues from home began to affect his school performance.  Steve struggled to follow the rules and often found himself in trouble.

“Basketball and swimming,” Steve said.  “That’s how I got away from my problems, was playing sports.”

Unfortunately, sports were not enough to keep Steve out of trouble.  He dropped out of school at the age of sixteen. Following his drop out, he was arrested at 16 for a burglary and assault.  He would go in and out of jail for nine years, until he was 25.

“I grew up in jail.  I went in as a juvenile and came out as an adult,” Steve said.  “It taught me how to care for myself and to care about myself.”

Coming out of jail, things were looking up for Steve.  He moved into his own apartment, where he lived for seven years.  At the age of thirty- two, with a stable job and substance free, Steve felt as though he had made it through the rough patch in his life.

Then his mom passed away.

“I had been sober for a period of time, and then when my Ma died, I went back to drugs.  That’s how I ended up homeless.” 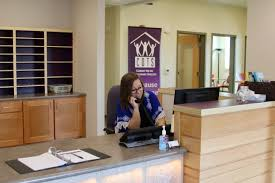 A COTS employee assisting a caller.

Becky Holt is the Development and Communications Director at the Committee on Temporary Shelter (COTS).  While working at COTS, Becky has watched the numbers grow and grow.

“When I first started working here, it was at the height of the recession,” Holt said.  “That was a time where we were seeing the highest numbers in our community and across the country.  It was growing at a faster rate than we had ever seen.”

Burlington is not the only area in Vermont to see an increase in homeless people.  The Berlin Police Department has received many disturbance complaints.

Berlin Police Sergeant Chad Bassette has been around homelessness since he was 14 or 15, volunteering in soup kitchens throughout his childhood.  When he began to receive complaints of disturbance and crime, he decided to address the issue head on.

Sergeant Bassette tackles the issue head on.  He goes into the encampments during his shifts to bring supplies to the homeless people who live there.  He provides them with the bare necessities to survive. Toilet paper, matches, blankets to stay warm during the winter, soap to wash themselves, clothes and more. 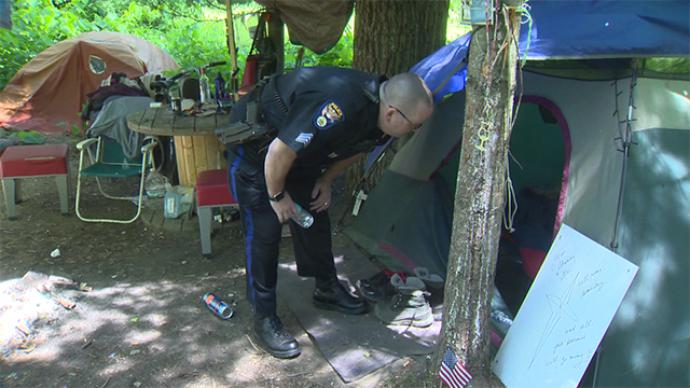 Bassette checking on the encampments

After meeting and talking to the homeless people who live in the encampment, Bassette’s view has changed.  “I was at the same understanding as most people, that they are all homeless and all trying to trick society,” said Bassette.  “But when you actually talk to the people and you actually see it happen, then you realize there are different classes of homeless people.”

Not all homeless stories have a sad ending.  Steve has been sober for over a year and moved into his own apartment on June 3.

“I hope to give back what they’ve given to me,” Steve said.  “I want to be able to help people like me who struggle with addiction or mental health.”