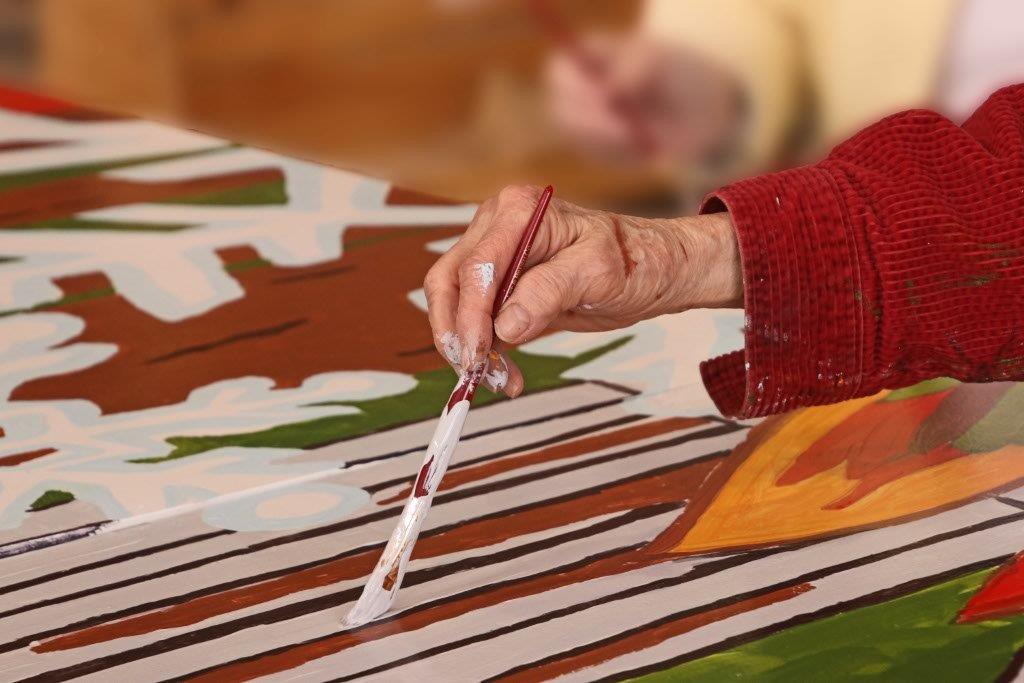 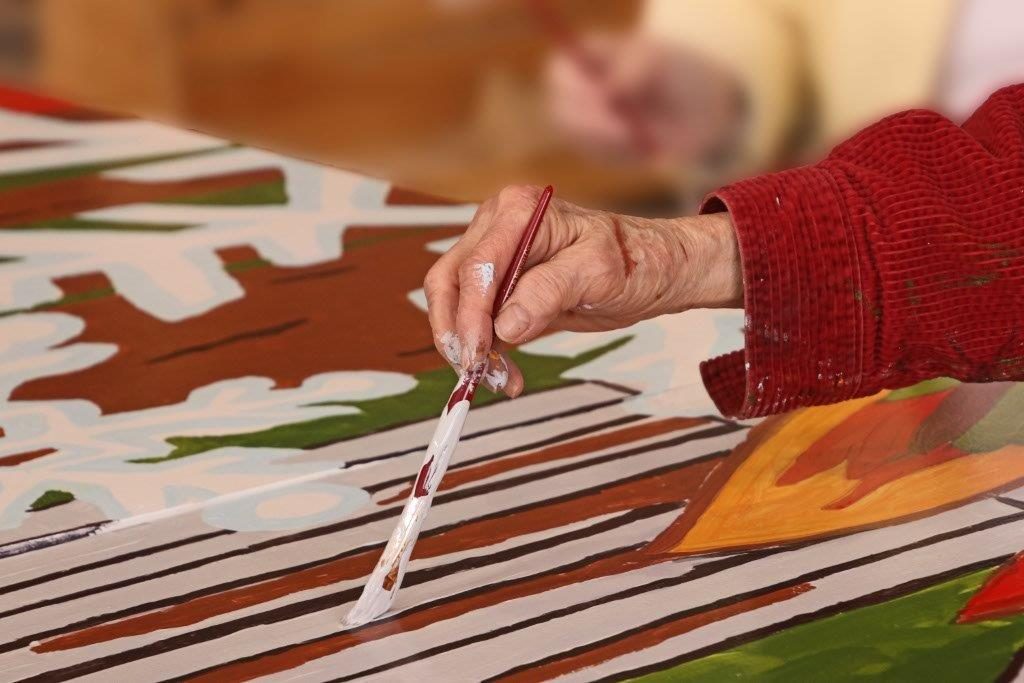 As you drive along Summer Street in Barre, on the left you pass a cracked grey concrete wall with faded graffiti all over it.  Along the wall, two faded panels are affixed, which are the remnants of a mural created ten years ago. It has become an eyesore to the newly renovated downtown Barre- until now.

On the morning of March 20, the paintings for the mural project, consisting of forty-seven 11-by-8 foot panels were finally completed. The Central Vermont Palletteers stood back to admire their hard work and countless hours of painting.  Admirers from the community came with their little kids, pointing at the birds and flowers. 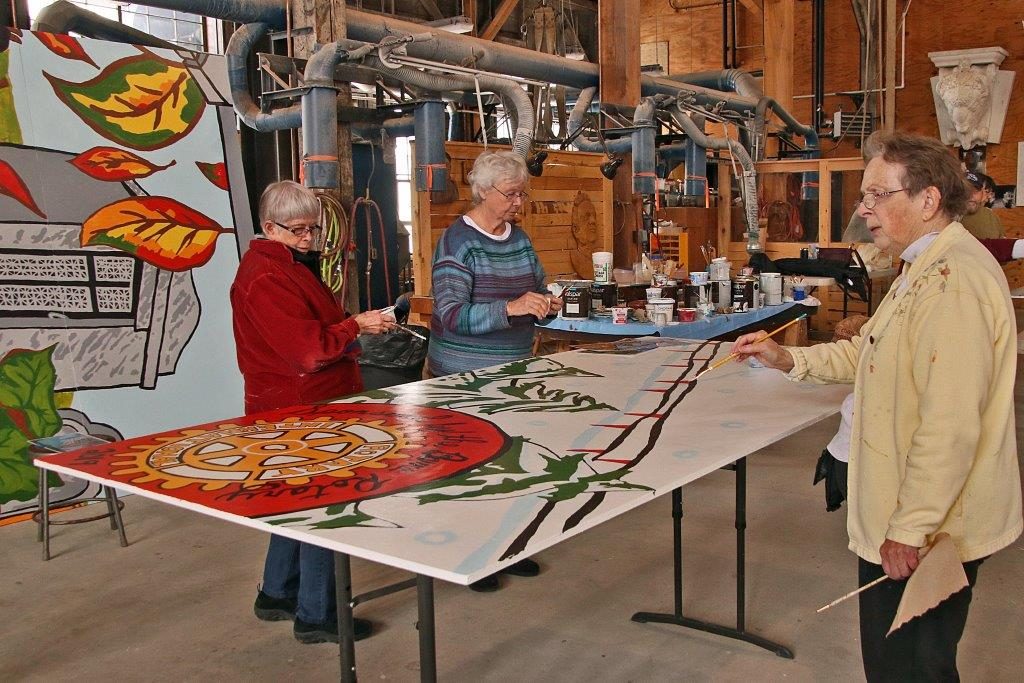 John Landy is the Vice President of the Central Vermont Palleteers. That morning he stood beside the panels, pointing to Ceres, who he had painted sideways, and celebrated the work as a whole.

“It was a wonderful example of four different groups coming together,” he said.  “There has never been a project in Barre like this ever before.”

When Caroline Earle was elected President of Barre Rotary for the 2016-2018 term, she chose a platform: service above self.  Barre has gone through drastic changes in the past five to ten years, with a complete downtown renovation taking place six years ago.

“I travel on Summer Street very often on my way to work or the gym,” Earle said.  “I had observed over the years that the retaining wall on that street was extremely dilapidated.” After all the improvements in the community, the mural seemed out of place.

“I wanted to create an interactive and educational experience,” said Earle. “[One] that teachers could bring their students to when teaching them about Vermont History.”

The mural, completed by the Barre Rotary with the help of the Central Vermont Paletteers, stretches across the 2,100 square foot wall on Summer Street.  If you look closer you can see it is more than just a mural. Hidden within it are little pieces of Vermont History, such as an interactive and educational eye spy with the idea that elementary and middle school classes could visit the mural during their Vermont History units.

When Barre Rotary formed the Mural Committee, they invited local artists including Kristine Chartrand, an art teacher at U-32 High School, who teaches jewelry, drawing and middle school art.  Kristine designed and painted the mural, depicting four seasons in Vermont.

“Realistic, but artistic,” was the instruction that the Mural Committee gave Kristine.

Going off the confinements of artistic but realistic, she began her sketches.  She drew from her own inspirations. “I do a lot of hiking and walking around,” she said.  “I remember seeing flowers when I was walking around, and thought, ‘oh, that would be a good place to put the bee.’”

Within the description that they gave Kristine, there was a list of Vermont symbols to include.  Ceries, the goddess of Agriculture, fiddleheads, an identifiable nature landmark, a creemee, a granite carving tool, a Hermit Thrush (the Vermont State Bird), and many more. 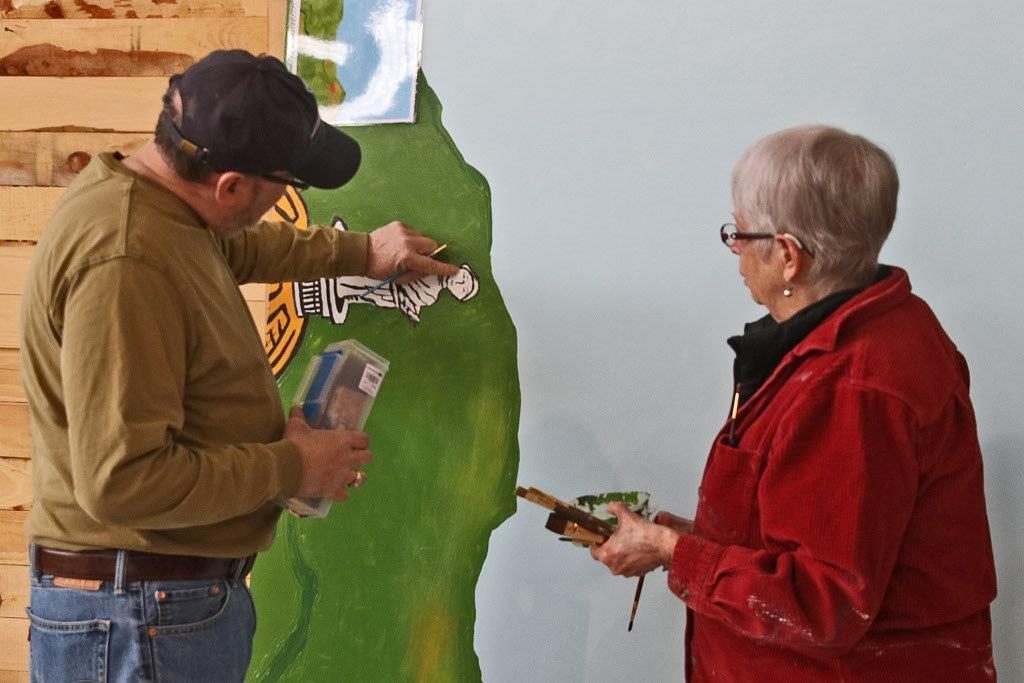 Painters work on Ceres, the goddess of agriculture.

The painted panels are scheduled to be put up on Summer Street before Memorial Day so that families who come down for the parade can enjoy the new mural with their young children.

“There are just so many examples of individuals, who, without their unique contributions, the mural project wouldn’t have been able to get off the ground,”  Ms. Earle said. “And all working towards one common goal, which is to better our community”.