Jordan Hawkins: The Road to 1000 Points

The clock stopped. The crowd watched, holding their breath. They were on their feet, signs and banners ready to be lifted high into the air. The U-32 gym was silent, save for the shuffle of Jordan Hawkin’s feet as he positioned himself on the foul line. He just had to make this shot, and it was over. Not the game, but the quest to reach one of the most significant milestones in a high school basketball player’s career. Few actually reach it in their four years on the court, but Jordan was one shot away from U-32 celebrity status. He held the ball just so, lifted it, pushed it upward, released. It traveled up, up, up… and then down. 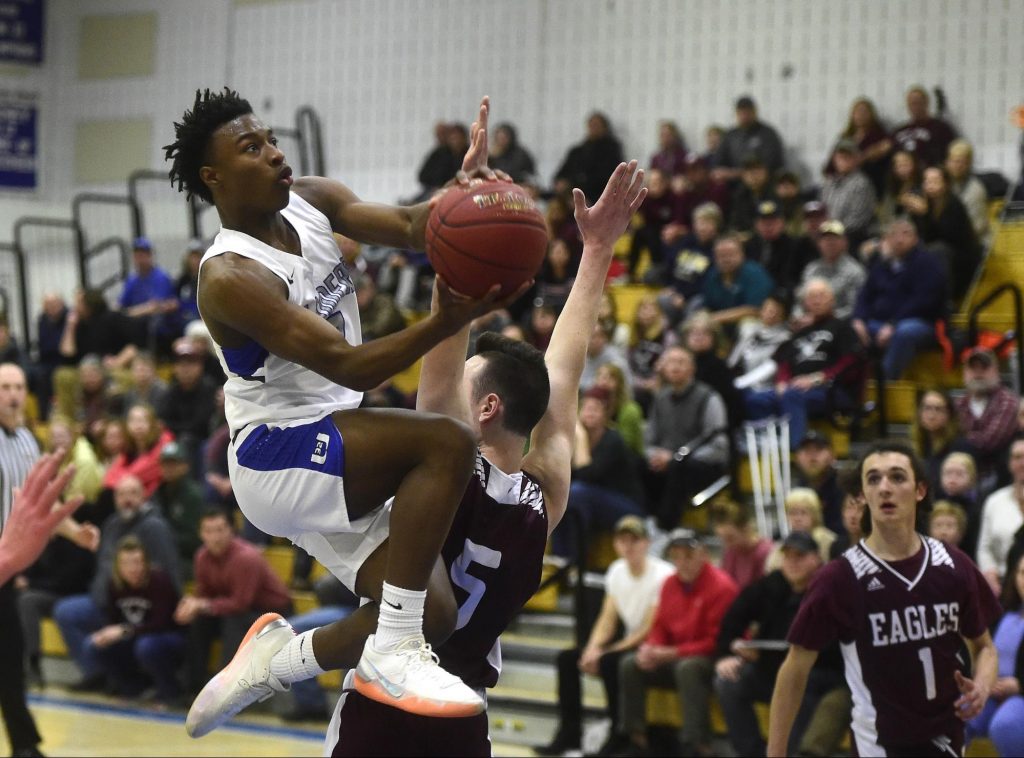 Jordan’s mission to reach a thousand points started long before he stepped on the U-32 court. He remembers seeing U-32 alumnus Ryan Booth make his one-thousandth point when he was little, and ever since then, he wanted to be in the same position.

“When I was younger, I went to a lot of high school basketball games,” Jordan said. “I would always see the games stop, and people get a thousand and I was like, ‘oh I want that, oh I want that.’” 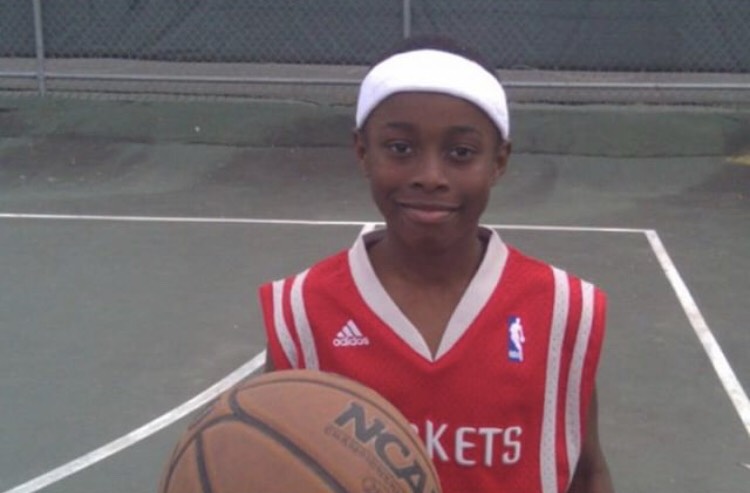 After another player got their 1000th point against Jordan and U-32 last season, he knew he had to meet the goal.

“It kicked in last year–Riley Urie from Lake Region got a thousand versus us, and then that really was like, alright, I need to step it up.”

Bryson Richards, a teammate of Jordan’s and a fellow senior, has played with Jordan since kindergarten, and, coached by their dads, they have been playing on the same teams ever since. 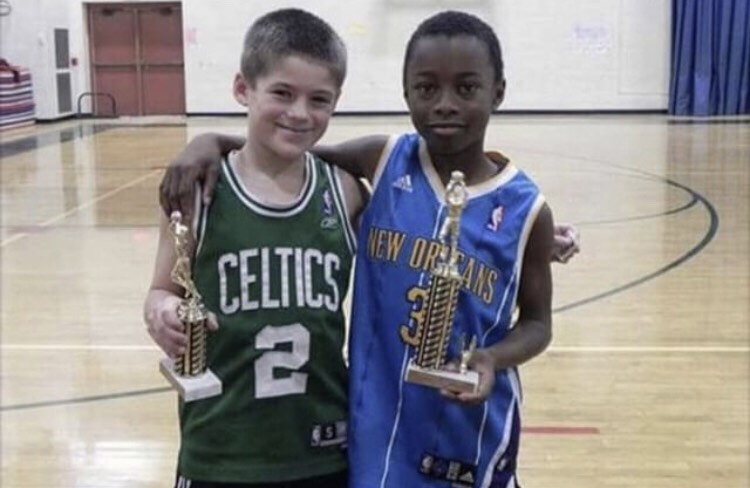 “He’s just explosive, crazy athletic,” Bryson said of Jordan. “He just does whatever he needs to do to score the basketball. (It) doesn’t matter if he’s going against big, tall centers, or quick guards–he’ll find a way to score.”

Jordan plays point guard and scores most of his points through layups. He had scored 547 points throughout his freshman, sophomore and junior years, meaning he would need to score almost that same amount in just one season. He knew he was up for the challenge.

“This year, he was just head and shoulders better than everyone else,” Bryson said. “He was like, ‘I think I can do this.’ We’d sit down and we’d do the calculations–how many points per game he needed to average to get it–and I think that 40 point game he was like, ‘wow, I can really get this.’”

Bryson’s best memory of Jordan on the court goes back to elementary school.

“Going way back, Twinfield tournament sixth grade, he hit two half-court shots in one tournament so those have to be up there.”

“He’s awesome, he’s a natural leader,” Bryson said. “So if guys are struggling with things he’s always there. If they don’t know a play, he’s smart so he’ll tell them everything that’s going on, what they need to do. He knows where guys are supposed to be on the floor and I think that just boosts everyone else’s play.”

The trip to one thousand points was tough for Jordan sometimes, a goal looming in the not-too-distant future. 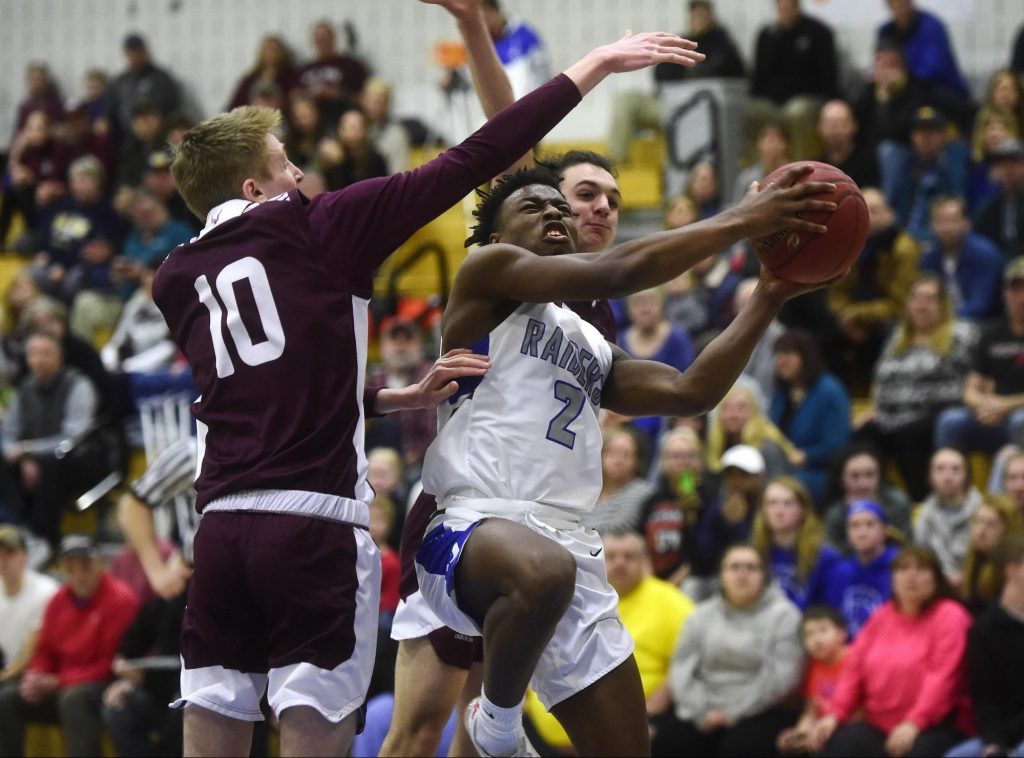 The pressure was mounting for Jordan, and telling people about his goal would only make things that much harder. That’s why he kept his mission under wraps, only telling a select few about his quest.

“I kept it very low-key, I didn’t tell many people about it,” he said. “My brother Aiden, he probably knew the most. He was pushing for me the whole way.”

Aiden knows Jordan better than anyone.

“Probably like halfway through the season, it started becoming a reality,” Aiden said. “Then he started to keep track of his points more.”

He let his brother do his thing on the road to 1000, but Aiden did have some helpful words along the way.

“I just said, ‘just go out there and play, don’t really worry about it–you’re gonna get it if you get it.”

Jordan planned it all out and did the math. He would need to score an average of around 20 points per game to reach his goal, a feat not unattainable for a player of his caliber. He muscled along through the season, and when playoffs came around he was 21 points short of a thousand. Going into the first round, Jordan knew that 21 was his magic number. All he needed.

“I was very worried,” he said, “but it worked out great. Just being able to get it at home, that was just the dream, I guess.”

Jordan was at the foul line, needing just one more point to send him into the U-32 history books. The crowd was on their feet, signs and banners at the ready. The silence of the gym was louder than ever. It was just Jordan, the ball, and a shot away from Raiders glory. He positioned himself on the line, lifted the ball up, pushed upward, and released. It traveled up, up, up… and down. Swish.

“I almost started to tear up,” he said.

Jordan ended his U-32 basketball career with 1019 total points, only the seventh boy’s player in U-32 history to reach the 1000+ milestone. He joins the likes of Ryan Booth, Dan Macke, Pat McGinn, Tanner Pryce, Kevin Holmquest, and Randy Goodall.

Jordan graduates from U-32 in the spring, and the basketball doesn’t stop at the Raider court for him. Norwich or UMaine Farmington are his choices for college ball, and while thoughts of the NBA are on any aspiring basketball player’s mind, he has one more goal to reach first.

“I guess my next goal would be to hit a thousand points in college,” he said. “I’d like to do that.”