“We lose money left and right:” Cafeteria at the Crossroads 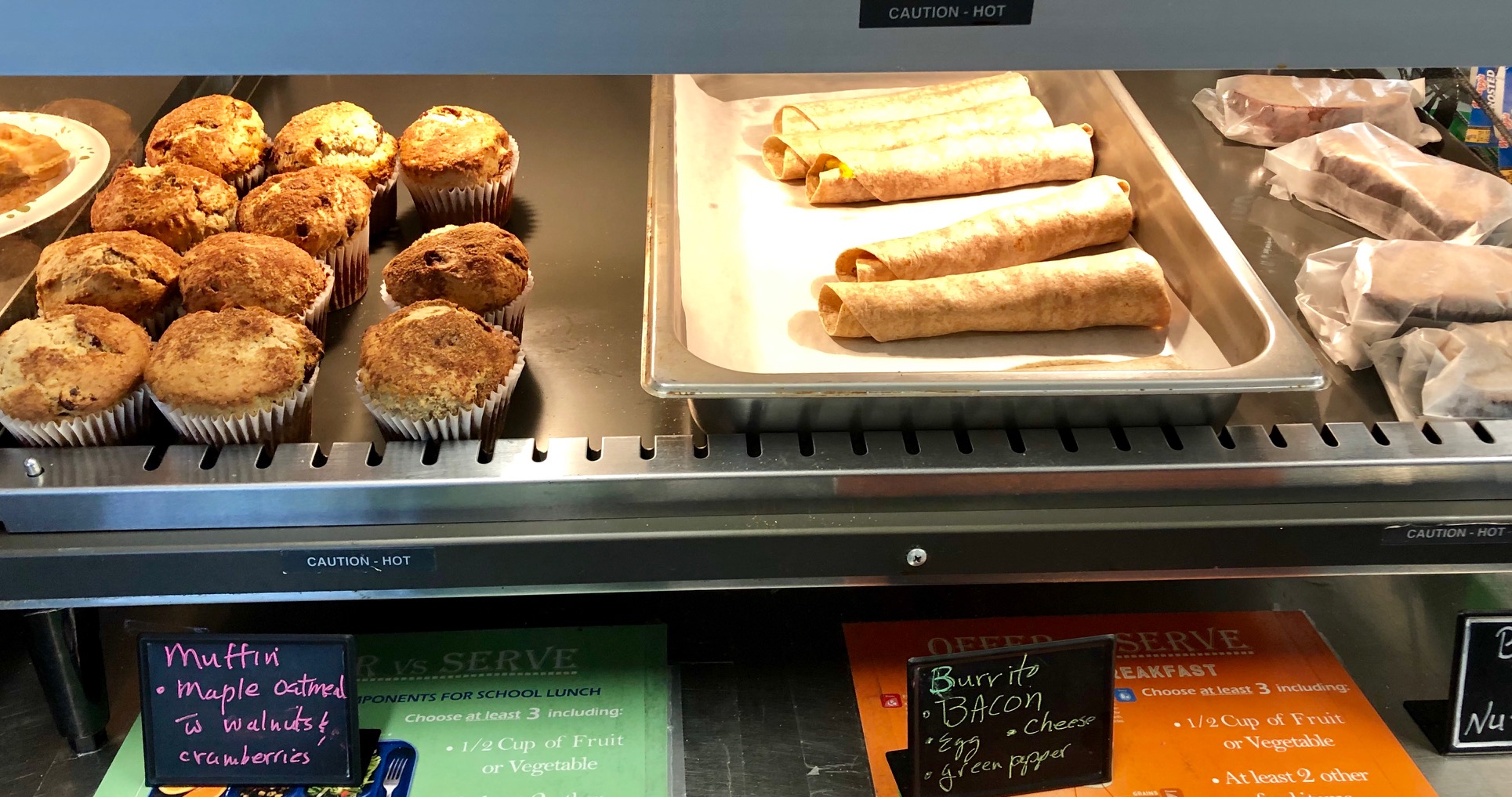 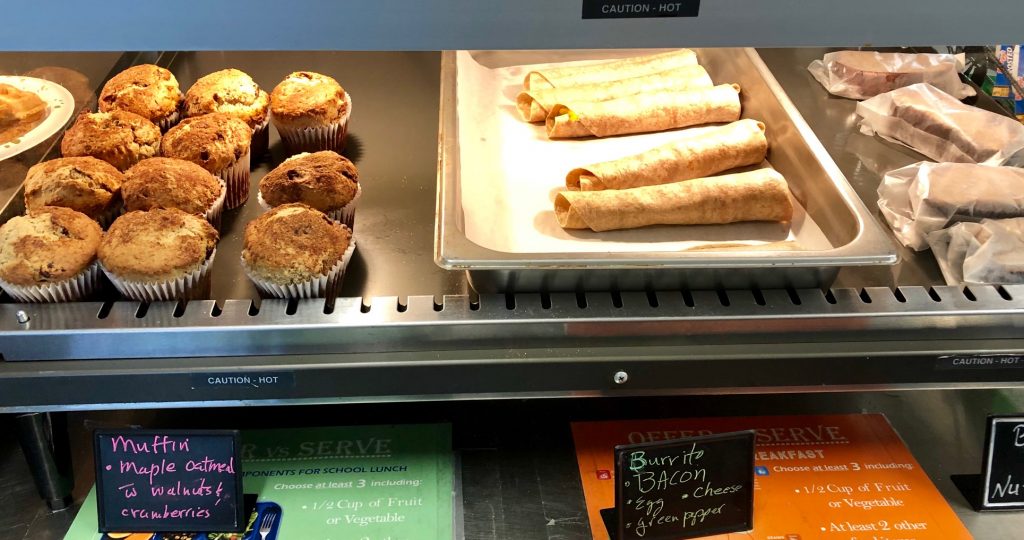 The gates to the sandwich bar had not yet been opened. Near the cash registers of the cafeteria, a small cart was set up. On the top shelf of the cart, several types of plastic packaging were displayed, along with a set of reusable plates and bowls. U-32’s food service director, Brian Fischer, stepped into the middle of the cafeteria and spoke into a microphone.

Brian’s announcement served two purposes. He shared with the student body that U-32 will be eliminating almost all single-use plastics from the cafeteria, and also informed students that starting after February Vacation, students would not be allowed to purchase a la carte entree items, such as pizza slices, without adding the components to make it a meal.

The Green Team’s reforms are aimed at decreasing the cafeteria’s environmental impact, but Brian’s main concern is the food service budget. 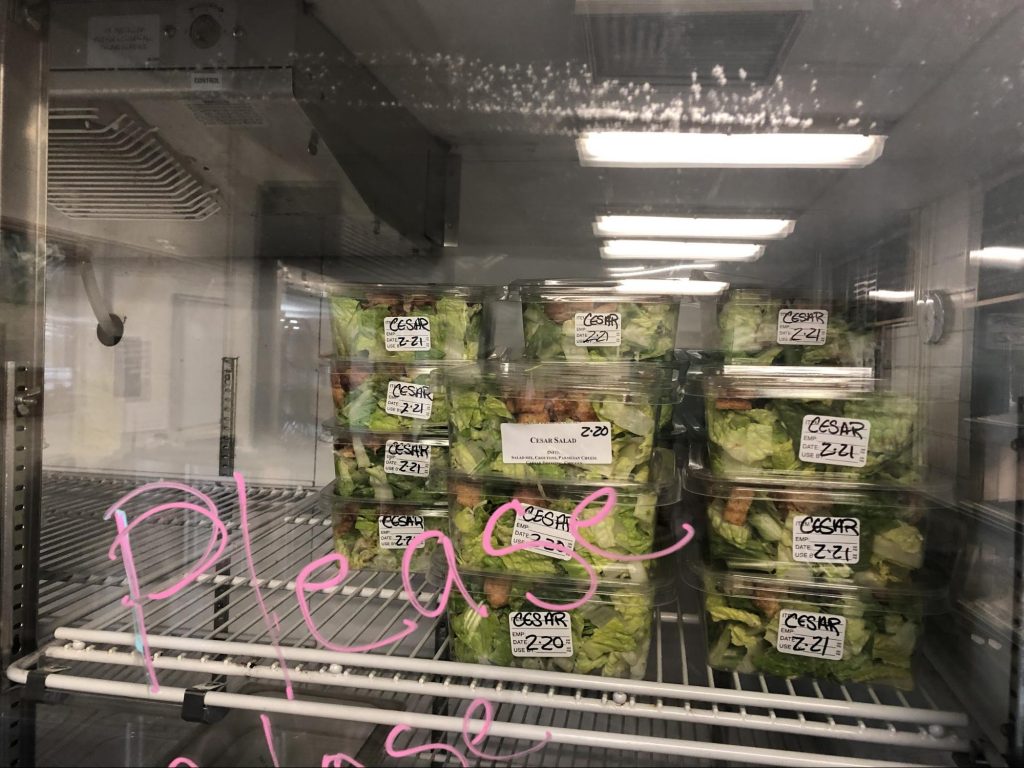 Caesar salads in single-use plastics in a cooler.

The U-32 School Board is in the process of refining and approving the budget for the upcoming school year. With likely decreased funding next year, the food service is evaluating its financial options if the budget is decreased. According to Brian, the food service receives a direct budget that is based on food sales. If the budget is smaller next year than in previous years, Brian would be forced to cut a staff member. This would likely make made-to-order breakfast items unavailable.

In order for the school to receive reimbursement, 3 out of the 5 meal components must be present. The school offers grains, veggies, fruit, meat/meat alternatives, and dairy are the qualifying components. Currently, the only item that qualifies as dairy is milk.

“Just serving pizza a la carte, we lose money left and right,” Brian said. He mentioned that a la carte sandwiches are also costly for the school. 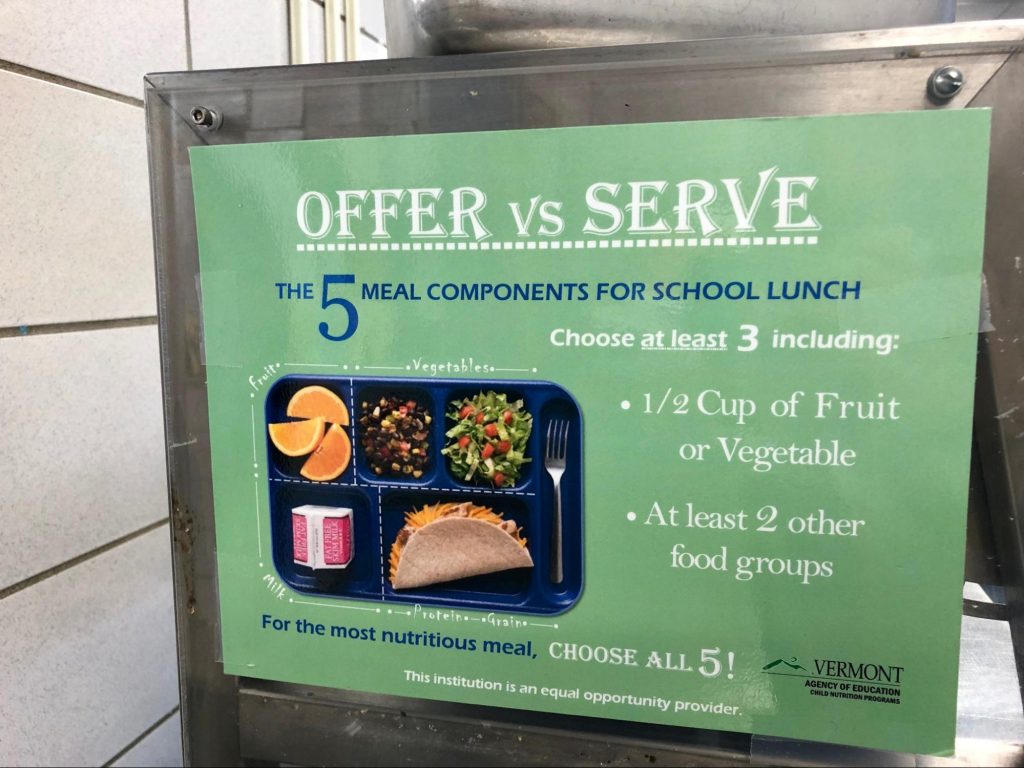 For example, a bagel with cream cheese and milk purchased by a student would not count as a meal. However, if a student added a piece of fruit to their purchase, it would qualify as a meal and the school would be reimbursed.

“When students don’t purchase [a meal], it could be a significant amount of money that the school is not getting,” Brian added. While 40 cents of reimbursement for each meal may not seem like much, Brian uses this money to purchase ‘commodity items,’ which includes fresh produce shipped in from California that would be scarce in Vermont during the winter. He mentioned that frequent droughts cause produce prices to fluctuate, meaning that he needs money from reimbursements to fuel his budget.

Students should also know that upgrading their a la carte items to a meal does not increase the price. Since a meal consists of more items, it’s actually more expensive for students to purchase a la carte items.

The future of U-32 food service could be positively impacted by Act 46 consolidation. While many community members are resistant to the school board/budget consolidation, it could be very helpful to the food service struggles at U-32.

“The sooner the schools merge, the better- provided that school food service goes under one umbrella. We’d be able to purchase foods a lot easier and better, and manage them in a different way,” Brian said. Consolidation would allow one budget for the district, allowing foodservice spending to be more streamlined, efficient, and overall less wasteful.

As the U-32 community anxiously awaits the release of its budget, Brian is somewhat hopeful regarding his potential budget under Act 46. “It would help us significantly,” he said.