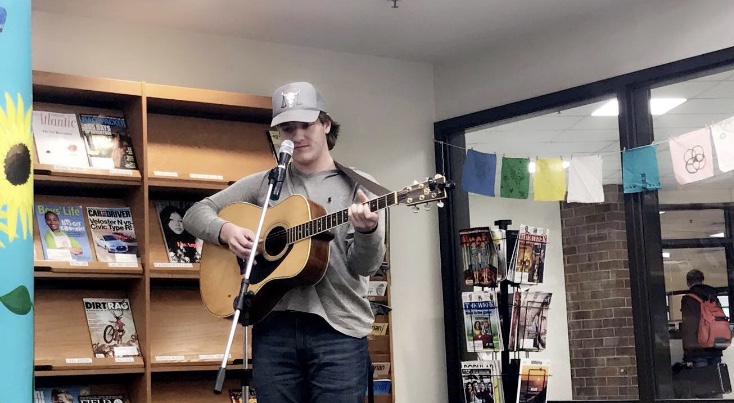 Jacob Bradley pulls into the driveway of Colin McCaffrey’s rustic house. Colin meets him at the door and the two walk into a green-painted room. Sound-dampening boards hang on the walls. In one section of the room is a desk where McCaffrey’s computers and software are set up. Different microphones are set up in a group and McCaffrey picks one fit for a vocal track the two will work on that day.

Bradley and McCaffrey have been working on an album for several months now, turning Bradley’s lyrics into recorded songs. Bradley expects the album will take several more months to finish, and is looking into publishing his album on Spotify or making CDs.

Bradley picked up a guitar when he was in first grade, drawing inspiration from artists like Pete Seeger (an old folk singer) and later on, Bob Dylan, The Rolling Stones, and The Beatles. While mostly self-taught, he took the U-32 guitar class in middle school and joined the jazz band.

As he got older, the hobby turned into a passion. He started to write his own music when he was in seventh grade. He has never been shy to share his own original work with the U-32 community.

“It was a lot of crappy songs up until a year or two ago,” Bradley said. “As my guitar playing got up to a certain level and my singing voice got stronger the songs started getting better.”

Some of these songs include Scorched, Your City, Preachers, Achilles Before, and Like Nicotine. They are almost always written in the first person.

“They’re quote-unquote love songs. They’re about relationships,” he said. “It’s sort of something I’m branching out from a bit.”

One song he is particularly proud of is called On The Ground Blues.

“I was fiddling around on the guitar one day and stumbled across the main riff, and it just sort of got caught in my head. I liked it because it was in three/four time which I think usually sounds nice,” Bradley said. “The melody was a nice contrast to the riff.”

The love song is about a man and woman who have fallen out of love. The man in the song has decided to move on.

“The lyrics draw on themes from blues, rock and country musicians, most notably Bob Dylan and Dave Rawlings,” he said. “The words dance between a scornful goodbye and a more gentle closing of the relationship, which is intentional so as to keep the song dynamic.” 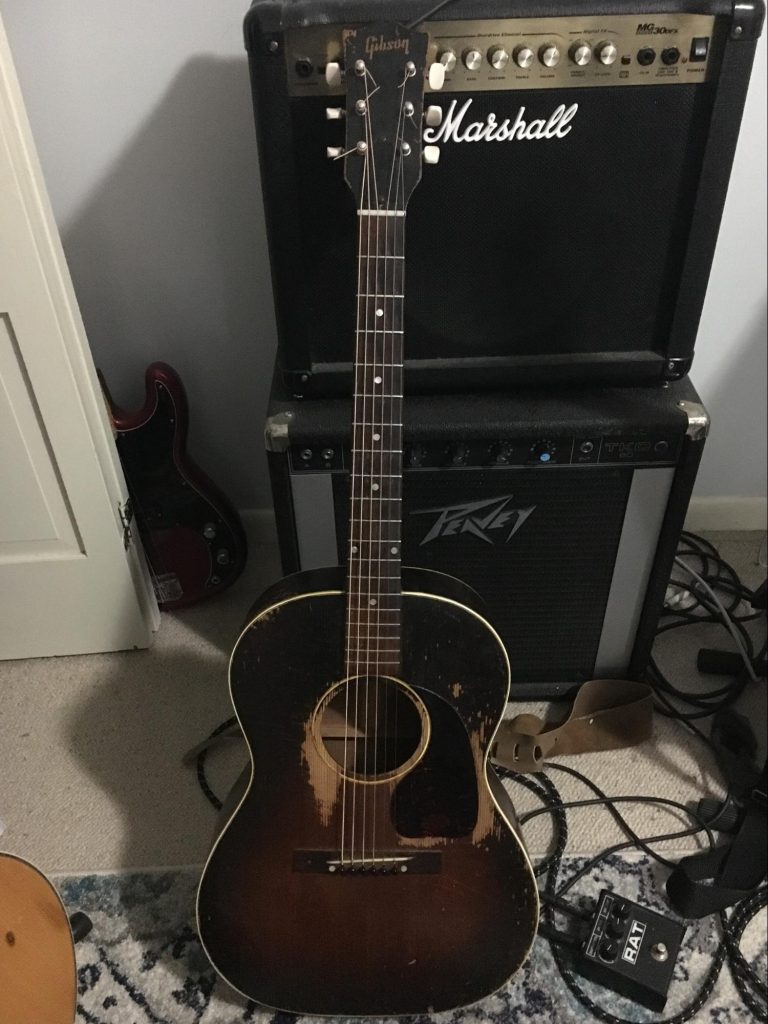 By this fall, Bradley had compiled a list of songs that he was proud of. He enrolled in Branching Out, a class dedicated to letting students choose something to study. “I was like, ‘this is enough to have an album,’” Bradley said.

Karen Liberman, U-32’s branching out teacher, introduced Bradley to Colin McCaffrey, a local music producer in Plainfield. The two met, bonding over a shared love for making music, and agreed to make an album. Once a week, Bradley brings musical ideas and song lyrics. The two collaborate, adding new ideas to the lyrics and sound.

“I consider my songwriting skills to be my strongest suit,” Jake says. “I’ll put down the foundation for [a song] and he can bring in a new idea to it because he’s such a good guitar player. He can always add something.”

When Bradley played On The Ground Blues for McCaffrey, the two got to work laying down the main guitar and vocal track. Instead of choosing one sound or genre as a goal for the song, they decided to add tracks one by one to see where it would take them. McCaffrey is featured in this song, playing a stand-up bass part.

“Colin was confident about the track so we decided to roll with it. In hindsight, the sound of the guitars overlapping fit together in a really interesting and colorful way,” Bradley said. “The song has a certain warmth to it, especially around the chord changes in the verses, which I hadn’t predicted or sought out particularly, but I’m really excited about now.”

With limited time to work on the album each week, Bradley will record all of his songs in McCaffrey’s studio first. Usually, artists record their music in a week, but for Bradley, this will take much longer.

When they finish recording, the two will begin the process of ‘mixing and mastering’ the songs, a process where they will set the level of each guitar, bass, drum and vocal part on all of the tracks. Right now, Bradley has finished recording five songs.

“It was the first time I had been recorded on a nice microphone,” Bradley said. “I was like ‘Oh my God, this sounds amazing.’ My voice and the tone of the guitar sounded way nicer than I had ever heard it.” 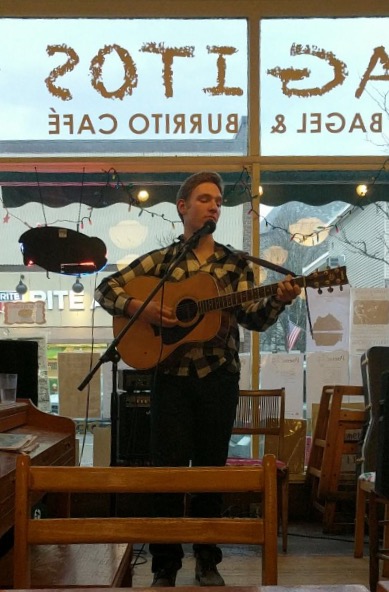 While Bradley is making his album, he continues to take every opportunity to play in front of a live audience.

On Friday, November 30th, Meg Allison stepped to the mic, welcoming students to “Open Mic Friday”. Jacob Bradley took the stage, holding an acoustic guitar in his arms. He introduced himself as well as the song he would be playing, Fare Thee Well (Dink’s Song).

“No one knows who wrote it, but lots of famous people have played it, like Bob Dylan and Dave Von Ronk,” Bradley said.

Standing at the mic, Bradley began playing his guitar and singing the lyrics: “If I had wings like Noah’s dove/I’d fly the river to the one I love/Fare thee well, my honey, fare thee well,”.