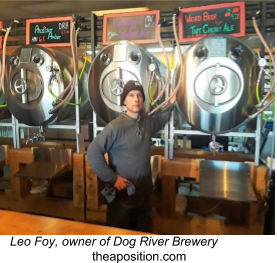 I bet it would be nice to know that when you swim in Lake Champlain, you are in contact with more than 1.8 million gallons of wastewater from local Burlington breweries and restaurants.

Recently there have been some issues with municipal waste involving Lake Champlain. Nick Giannetti, a man who has worked with the State of Vermont Wastewater Program for three years now, gave some insight on the problems in Lake Champlain. “Some of the major water quality problems that exist include invasive species, lake level fluctuation, and excess amounts of the nutrient phosphorus,” Giannetti said. Giannetti’s field is mostly involved in the excess levels of phosphorus in the water. “The nutrient primarily comes from stormwater runoff from agricultural fields, stream bank erosion, stormwater runoff from developed lands (Cities and Towns), and discharges from wastewater treatment facilities [emphasis added],” Giannetti said. He says that the state intends to fund water quality projects with hopes to prevent these problems. 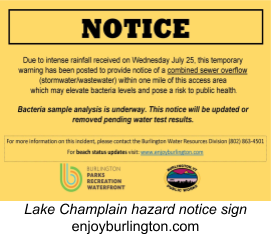 But are breweries the main contributors to these problems? According to Giannetti, “Breweries are not necessarily a direct contributor to the problems within Lake Champlain, although they can be an indirect contributor.” Breweries are connected to a municipal sewer, which leads to water treatment facilities. These facilities gather the wastewater, treat it, and send it into a body of water. An example was provided by Mr. Giannetti: “…the Dog River Brewery discharges its wastewater to the City of Montpelier Wastewater Treatment Facility. The City of Montpelier Wastewater Treatment Facility discharges it’s treated water to the Winooski River which flows into Lake Champlain.” This means that if a treatment plant does not, or is not able to completely treat the wastewater, it flows directly into Lake Champlain.

The wastewater from breweries and many other establishments contains phosphorus and breweries happen to have “high-strength” wastewater meaning that it carries a large amount of phosphorus and other pollutants. The excess phosphorus in the lake will cause periodic algal blooms, leading to unhealthy water.

So, are breweries expected to take responsibility for what they contribute to this issue? Giannetti explains that breweries are not expected to solve the issue, but are expected to manage their wastes. This managing costs breweries, but Giannetti says that anyone going into the brewing field should expect it. The program, that Giannetti works with, can provide understanding and technical assistance to brewers if needed.

The state is playing their part in trying to keep Lake Champlain clean, but as Giannetti explains, “It’s really a combined effort between the State and those businesses/properties discharging phosphorus to the Lake.”

Let’s see how brewers view this issue. Leo Foy, owner of Dog River Brewery in Berlin, Vermont, has been brewing beer for 10 years at home and recently opened his small, new brewing business that has been running for about a year.

The main waste that breweries produce, according to Foy, are spent grains, which is a byproduct of the mash extracting the sugars and nutrients from the grains (Craftbeer.com). “The one main waste is spent grain, and that gets donated to farmers as pig feed,” said Foy. Brewers over the years have devised many ways to reuse spent grains, in bread, in cookies, and as Foy said, in pig feed. Some other wastes that breweries produce are “grey water” and “trub.” Trub consists of spent hops and spent yeast and grey water is just water with some chemicals involved. “These are washed down the municipal sewer,” said Foy.

Although the spent grains are a waste product, the problems are most likely caused by this mix of grey water (wastewater) and trub (Spent hops and yeast). This water is washed down the municipal sewer which, Giannetti said, leads straight to water treatment facilities. These facilities may not be able to completely treat the wastewater, which flows into Lake Champlain. This high-strength wastewater is a definite contributor to the phosphorus problems in Lake Champlain.

Breweries producing high-strength wastewater means that the state must regulate them more. Foy explained that the more the state regulates, the more money the business has to spend: “Well, anytime the state regulates more, it ends up costing the business money.” Foy is a small brewer, so money is more of a concern than that of a bigger brewery. “And being a small brewer,” he said, “any added cost is bound to be a much bigger percentage of my operating costs than a much bigger brewery.” We don’t know how far the state will go with regulations, but Foy says that a few little ones would be doable for his small business.

Other states have imposed water treatment regulations on businesses to help the municipal waste facilities process wastewater. Foy explained why, from a brewer’s perspective, “whenever the municipal waste facilities become outdated or antiquated or overstressed, they try to push the workload upstream, to the businesses, trying to get them to do more of the water clarification before it gets to them.” This means that Foy’s business, or any brewery, would have to buy more tanks and equipment to do what the facilities can’t. And with more things to keep track of and fines to watch out for, things become more complicated for the businesses. Foy says that along with it becoming more complicated, it may cost more money than he can spend. “As a small brewer, I can’t just go get equipment from all the money in my pockets,” he said. Bigger establishments shouldn’t have to worry too much as they can get loans from the state and they have a bigger workforce. Foy explains that “if your a big brewer you can get loans and you have more manpower to carry out tasks.”

So if the state imposes regulations to fix the problems in Lake Champlain, it might mean that some breweries may not be financially able to follow up. This would mean the fall of many microbreweries in the state, one of Vermont’s biggest tourist attractions along with ski resorts and maple syrup. There are 55 craft breweries and breweries alone that make Vermont about $199 million in tourist income, according to a 2016 report from Shelburne News. We will have to see how it all plays out, as this is a long process.