Montpelier’s Parklets: Worth the Parking Space? 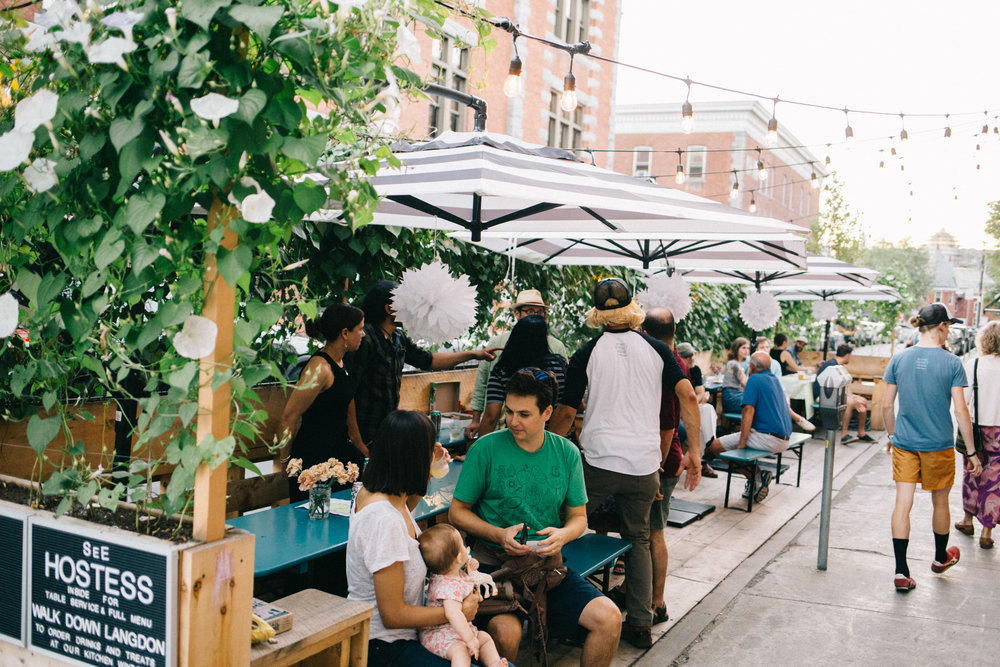 In May of 2018, the Montpelier City Council voted on the installment of one of the most controversial parklets in the town, which was an extension of the Southern-style restaurant Down Home Kitchen. The parklet would include picnic tables, plants, and string lights, but it would also occupy three parking spaces on a tight street.

The Down Home Kitchen parklet as well as several other parklets were intended to encourage tourism and ultimately bring more money to Montpelier by changing the city’s focus on pedestrians.  In an interview with The Times Argus, Down Homeowner, Mary Alice Proffitt, remarked,“‘I just feel like the more outside spaces we have in downtown Montpelier where people can sit outside and enjoy being together, the better.’” 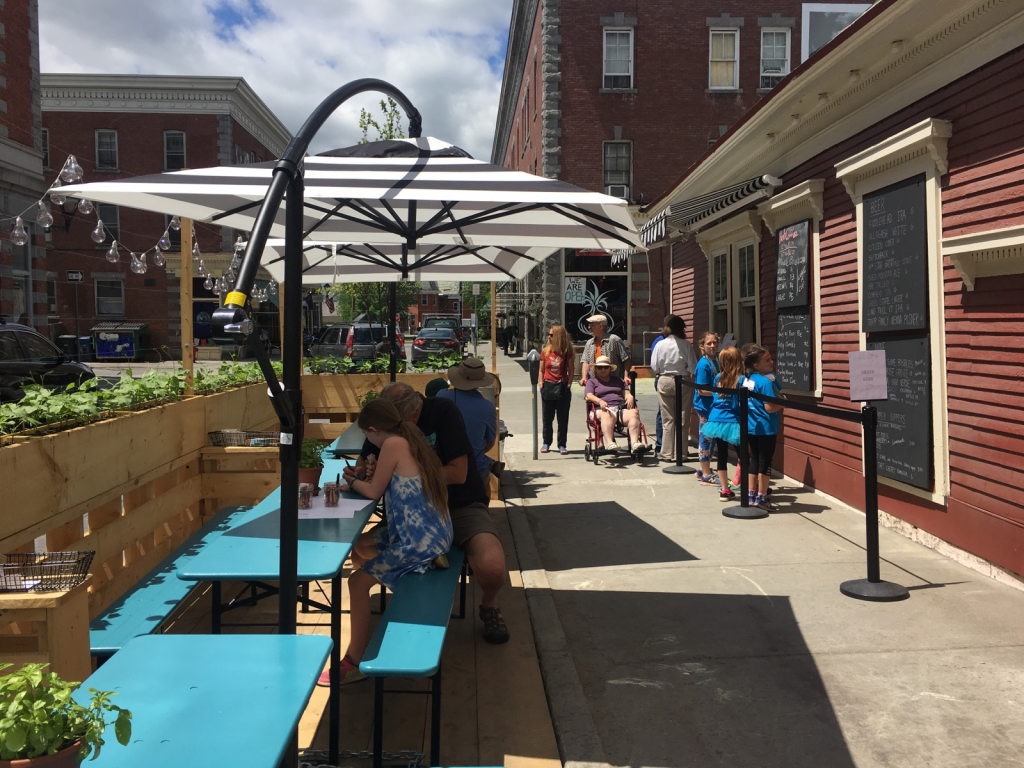 Sylvan Williams, a junior at U-32 High School and former Down Home Kitchen employee, shared her opinion on the topic of the Down Home Kitchen parklet and the other parklets around Montpelier: “I like them…I think they add to the Langdon Street vibe… I think it works with the artwork… Not a lot of cars go down the street, it’s not a really busy street…” Sylvie explained that she agrees with the addition of the parklets and the new efforts to keep Montpelier focused on pedestrians, but she also lives close enough to the dance studio that she doesn’t need to drive to dance classes every week and doesn’t have to worry about the parking situation. However, in regards to the size of parklets, she said: “I think that it’s fine as long as it’s not huge or obstructing parking or in the middle of the street. I like the size of the parklets that have been put up so far…The Positive Pie parklet only has a few tables…,” she added. Essentially, Sylvie agreed with the installment of the new parklets, and she didn’t believe the Down Home parklet or other similar parklets to have an inconvenient location or occupy too much space.

The new Langdon Street parklet additions aren’t necessarily new ideas to the community. In previous years, other businesses such as Positive Pie have also installed private parklets to extend their dining space and utilize the outdoors. What is causing the disagreement surrounding the Down Home parklet? Proponents of the plan to continue expanding private and public parklets believe that the idea is creative and has the potential to attract more visitors, while opponents of the parklets are concerned about the continual lack of parking in and around Langdon Street, specifically the owners of small businesses on Langdon Street.

Allison Mann, the director of Contemporary Dance and Fitness Studio, had her own take on the parklets and their effect on business: “I’m not in favor of them when they occupy parking spaces. I understand the appeal- they’re festive and there’s a strong push to attract tourism, but I don’t feel like a city of our size has the real estate to support using the space that way.” In regards to the studio’s effect on surrounding businesses, she said “…because we bring so many people downtown, it impacts other businesses…[because of the Down Home parklet] there’s reduced parking…” she added. Allison has been the studio’s director for nine years and stood in for the studio’s owner Lorraine Neal; therefore, she feels responsible for the students and she hears their complaints about parking frequently. Also, Allison is primarily responsible for the safety of the dancers at the dance studio, which brought up another concern because many of the dancers practically live at the studio and need to park nearby in order to feel safe walking in the dark after dance class. In short, she agreed that the parklet was a good idea that was executed poorly, and she believes that a city of Montpelier’s size is too small for a business to expand outdoors in the way it has. Also, Allison added that little notice was given before the parklet was created, and other business owners shared her opinion and believed that their voice was disregarded when it came to the use of their limited space. 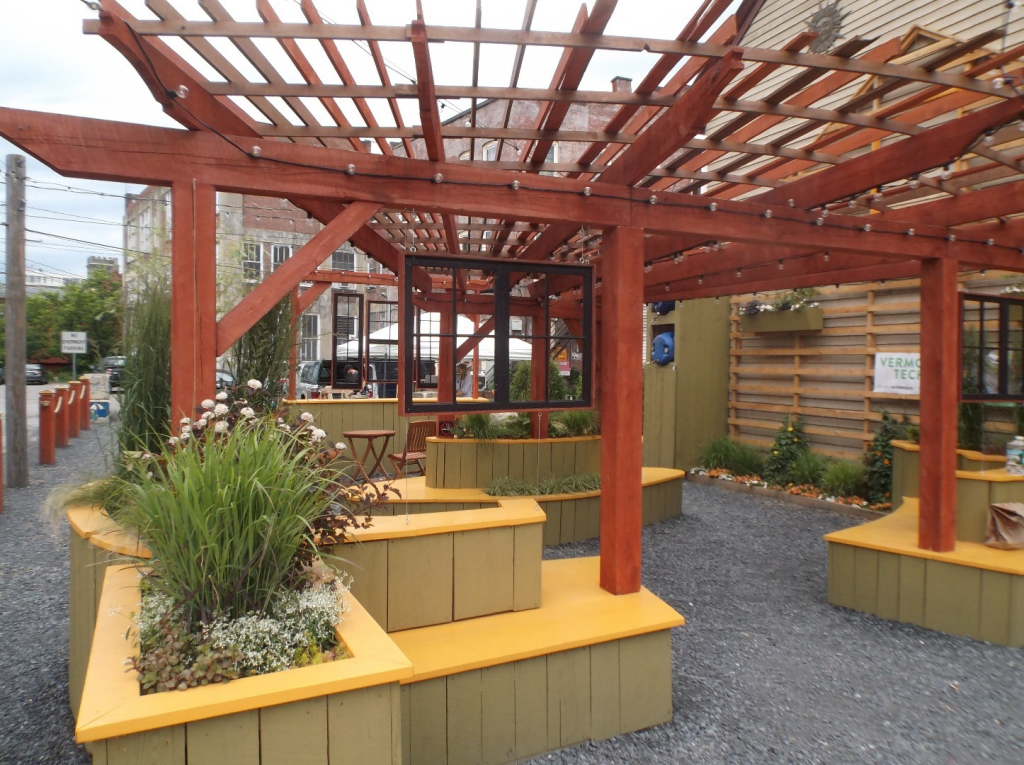 In addition, an anonymous interview subject who had first-hand experience with supporting local businesses and dealing with tight parking said, “I think it’s too big for the area they have it set in..when there are cars parked opposite, it’s hard to get out.” This subject agreed that they’ve heard about the lack of communication among the businesses on Langdon Street concerning the parklet, thought that the lack of parking could have a negative impact on people just looking to shop. Also, the subject explained that it would only be fair to get the opinions of surrounding business owners as part of the process for applying for a parklet permit because the space on the street is still a shared space.

Overall, in the several months following the installment of the Down Home parklet, controversy still exists surrounding the topic. Some small business owners disagreed with the decision to add another parklet and got little notice prior to its construction, but proponents of the plan argue that people, not parking, make a community flourish. The owner of Down Home Kitchen believes that the move to expand outside will be good for both her business and those surrounding it, but it is too early to tell whether or not the claim is true. Finally, more controversy may be on the way for  Down Home with its potential further expansion of the parklet or expansion of a creemee window.

Dunphy, Mike. “Parklet or Parking? Which Brings More to Montpelier?” The Bridge,

—. “‘Pocket Parklet’ Program Gets Extension from City Council.” The Times