“Get Your Elbows Out There”: Amy Molina, Basketball Legend 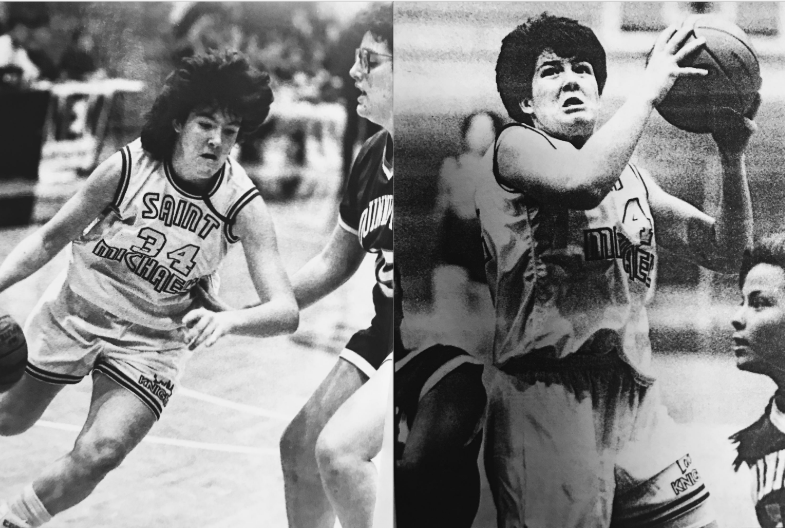 In a 1993 college basketball game against Merrimack College, Amy Molina stood on the baseline, facing an aggressive opponent. She faked a pass at the girl’s face, and watched as the ball slipped out of her hands and hit her square in the forehead. It bounced off and Molina shot and drained a three pointer.

Amy Molina was a beast when she played 4 years of college basketball at Saint Michael’s in Burlington, VT. She set over a dozen school records and is still the 5th all-time scorer in New England DII history.

Molina grew up in Londonderry, NH, and did not start playing basketball until she was in 6th grade.

“I actually got cut and didn’t make the team,” she said, “but I didn’t even know how to play basketball, so that was not a surprise.” She stuck with it, though, and everyday after school she and her friend would teach themselves how to play.

When she was in 9th grade, she went to a new school with a new basketball coach. “We had all these stations, and one of the stations you had to juggle,” Molina said, “and she (the coach) said ‘if you can’t juggle you can’t make the varsity team’ so I went home that night and taught myself how to juggle.”

Molina was determined to improve her basketball skills. “I just went to a ton of camps,” she said, “and just got better and better.”

When it came time to look for colleges, she looked at a lot of DI and Ivy League schools, but she wasn’t very interested in any of them. When she came to tour UVM, she didn’t like the school, but she fell in love with Burlington. The Saint Michael’s coach called her later that week, asking if she would consider going to school there.

Her mom drove her back up to Burlington to tour St. Mike’s.

“I think I was on campus for maybe 20 minutes before I decided that’s where I wanted to go to school.”

In her freshman year in college, Molina didn’t think she would get any playing time on the basketball team. She was three spots down on the depth chart, which meant there were 3 people in her position who would play before she ever got to. In preseason, one teammate who played over her blew her knee out, so she moved up the depth chart, but she still didn’t expect to play.

“Our first game of the year me and my teammate were sitting way at the end of the bench and we were like ‘This is great, front row seats to a college basketball game!’” she said,  “and within the first three minutes of the game, coach told me to sub in. I was like ‘Uh, me? Wait, no I’m just watching.”

She played well, and by her third game, she was starting. 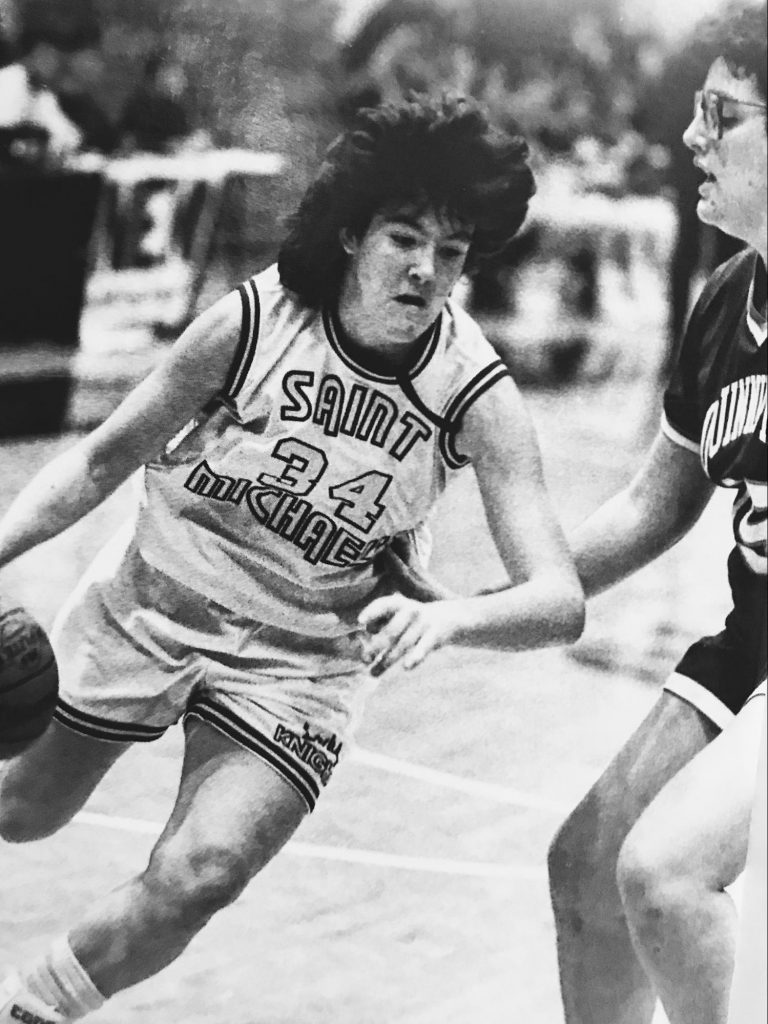 Molina’s ‘breakthrough moment’ of her college basketball career came during the summer in between her junior and senior year. She set a lot of goals related to the upcoming basketball season. “I had a really long talk with myself about what I had to change,” she said.

Her back was hurt, so she couldn’t do a lot of running, but she worked out five hours a day on campus all summer long. “I felt like I was getting in great shape, but didn’t really have any sense.”

When her teammates came back for the year, they did fitness testing. “I was blowing everybody out of the water as far as what I was lifting and that sort of thing, but then one of the tests was to go run three miles and I was like ‘I don’t know if I can do this with my back.’”

“I went out and beat the really good in-shape kid by like 15 minutes.”

Molina is considered one of St. Mike’s greatest basketball players. She is still the college’s all-time scoring leader, with 1,933 points. Sue Duprat, Molina’s college basketball coach, said, “she was always the hardest worker on the teams she played on.”

Molina earned many trophies and honors, including the Roger F. Kehler and Victor V. LeMieux awards. She also coached alongside Duprat after graduating.

Another important moment in Molina’s career was her last college basketball game. The game was tied with only a small amount of time left, and she drove to the basket to shoot the last shot. She missed, meaning her team lost the game and did not advance to the next round of playoffs. “That was heartbreaking,” she said. 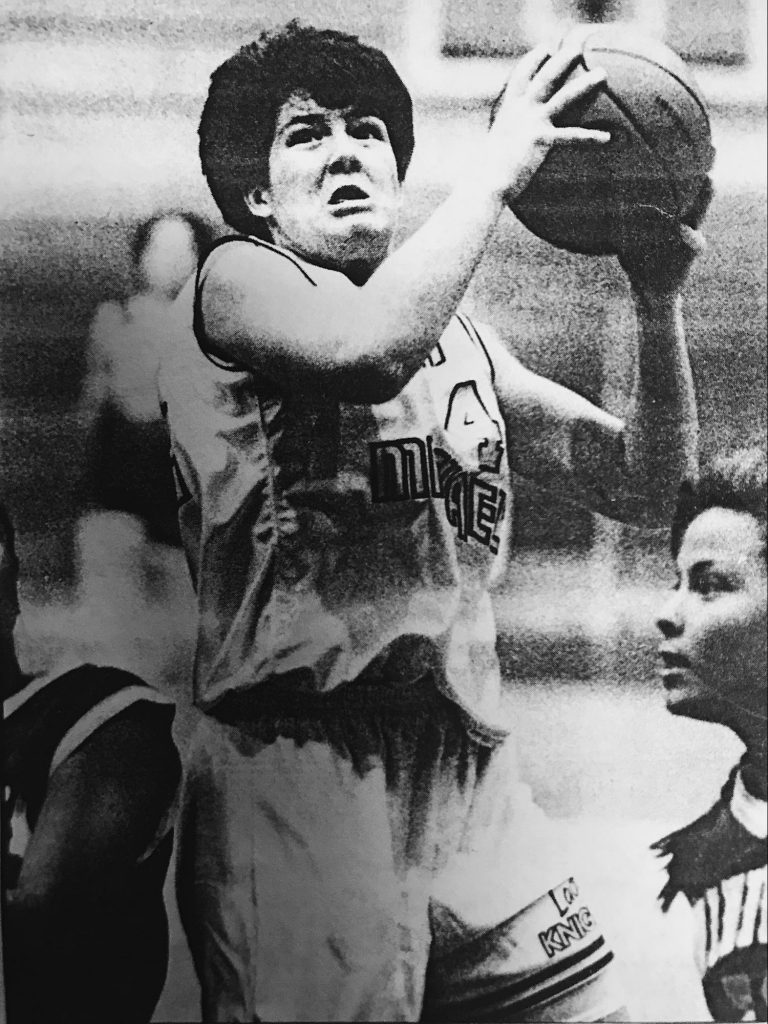 After she graduated, Molina was named an All-American, which means she was one of the best college basketball players in the country. She got to go to the Olympic tryouts in Colorado Springs, where she met Lisa Leslie, a four-time Olympic gold winner and experienced sportsmanship like she never had before.

“You could go up for a layup and if you fell there would be 15 people picking you up and congratulating you.”

She made it to the second to last day of cuts, but didn’t end up making the Olympic team.

Molina still uses her basketball playing and coaching skills to this day. She ‘coaches’ students every day during her job as the director of student affairs here at U-32, and sometimes even gets out on the court. She’ll help with post moves, telling players to ‘get your elbows out there.’

You can still find a little piece of Molina’s college basketball career at St. Mike’s. After she graduated, her number, 34, was retired, and now hangs in the gym permanently.

“I had a really good friend who worked in the buildings and grounds department, and so they actually got my actual uniform from the athletic department,” she said. “They hung it on a hanger and they lifted it all the way up to the rafters.” 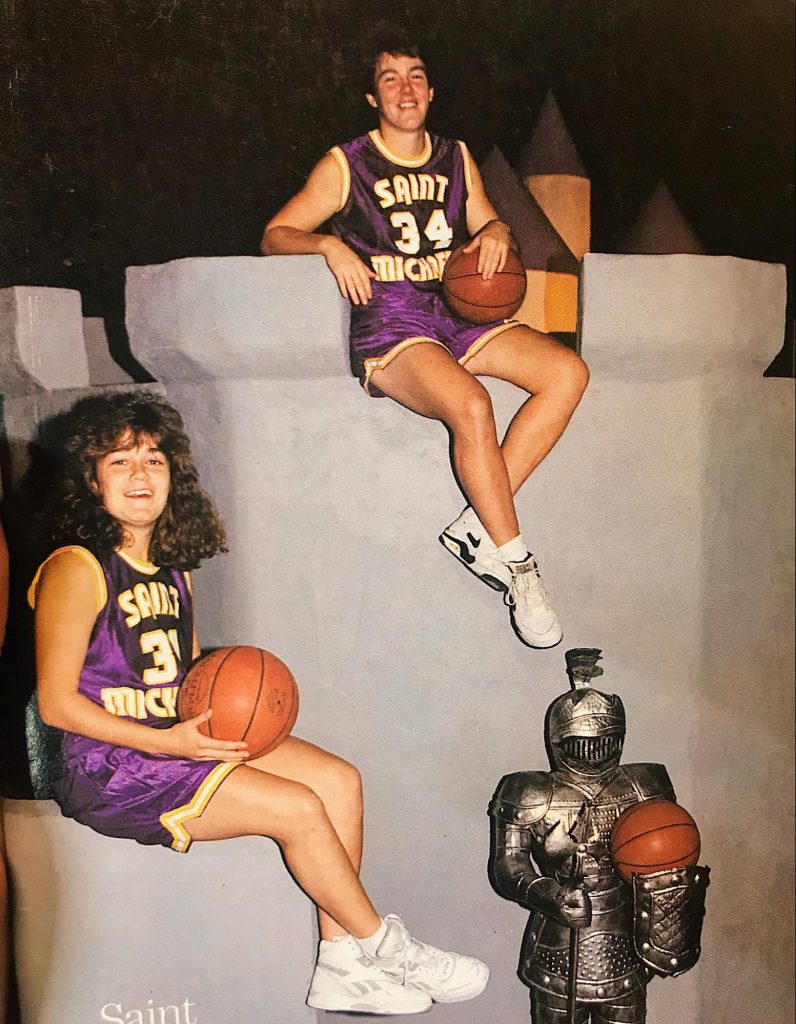