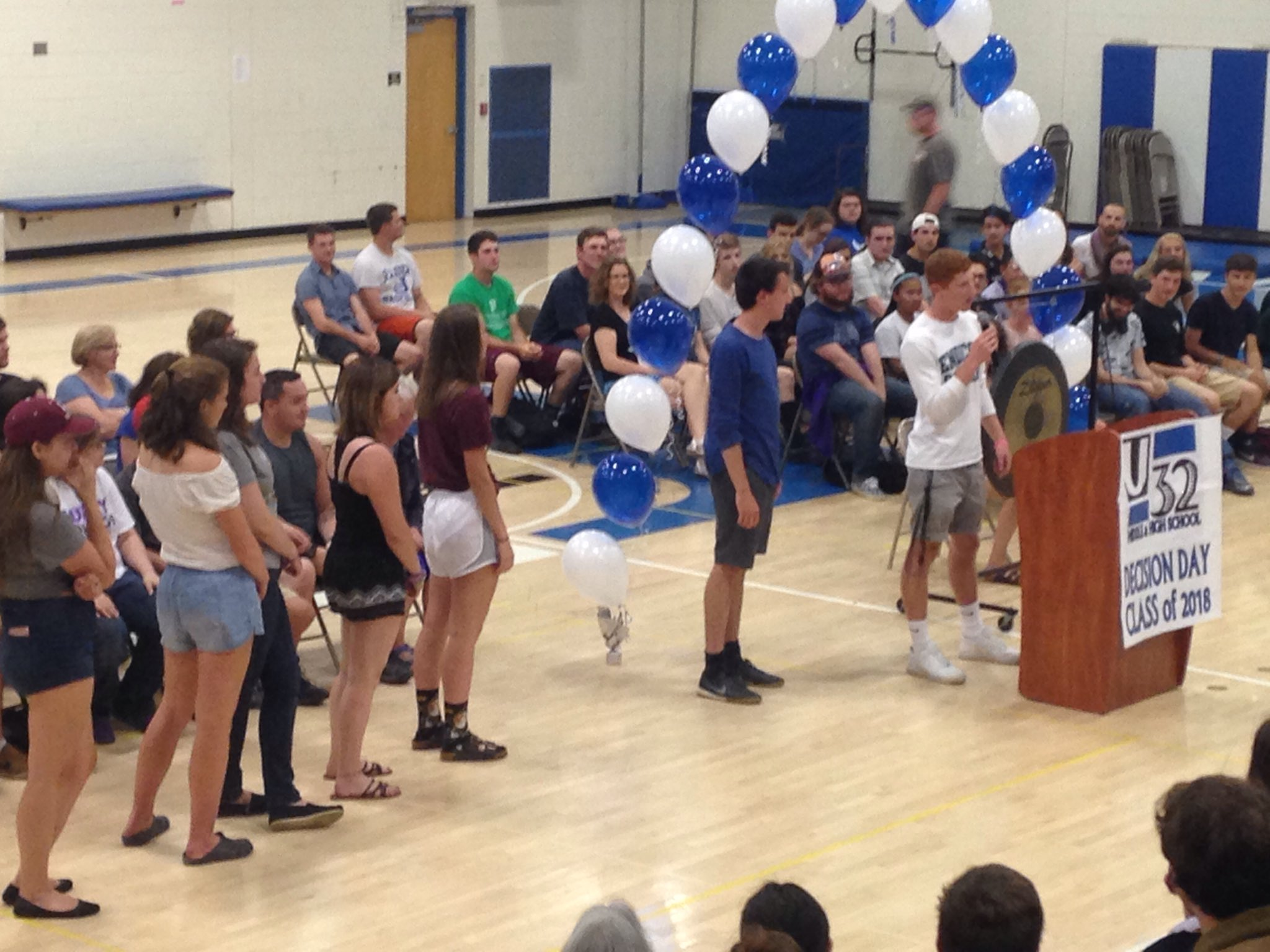 On June 1st, 2018, over half of the senior class flooded into the gym for their Decision Day assembly. They took their seats on cold metal chairs, and stared out over a sea of younger students, who applauded as the seniors settled in. After a speech from Scott Harris about his path to U-32, the main event began. 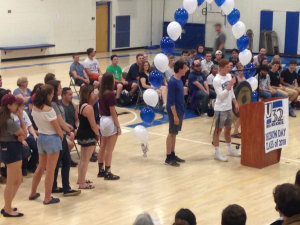 One by one, each senior announced their plan for their lives after graduation. The first senior announced the college he would be attending, while the next student shared her plans to take a gap year. While college was the destination for most seniors, a significant number shared decisions to take time off, join the armed forces, or join the workforce. Two students shared that they did not have a plan. Each student then rang a gong while the audience applauded.

Behind the scenes, there were mixed feelings among the senior class. “I understand that teachers want to… give a face to the many choices younger kids will face,” explained senior Silas Rollins-Greene, “but also, a lot of the seniors weren’t comfortable going up…probably because they’re embarrassed and didn’t want to go up in front of the school and say they had nothing planned.”

For Rollins-Greene, the problem is not unique to U-32. “It’s not about our school,” he said, “It’s about society… Kids feel ashamed when they aren’t able to get into college or they don’t have a plan, and a lot of kids will shame them and even a lot of teachers will… But slowly we’re seeing celebrities and politicians and people who didn’t go to college elevate themselves to high positions of power.”

Senior Stella Gardner worries that without context, decisions won’t be understood. “I think that in the end there ends up being a lot of judgement surrounding our college choice because people don’t know the difficulty of the process we’ve been through,” said senior Stella Gardner. Seniors have spent months researching options, writing applications and making tough choices.

U-32 Counselor and Decision Day coordinator Cairsten Beanland understands these concerns. “It seems like people think four year college is the thing we need to shoot for,” she said. However, Beanland hopes Decision Day celebrates all decisions equally. “There’s lots of things kids can do,” Beanland continued, “and they all have equal value and weight.”

She hopes that through repetition, this event will decrease the stigma surrounding certain decisions. “It was something new and I think that’s always hard,” she said. “I think a lot of it was nerves, like even speaking into a microphone can be scary for some people.” She also feels that culture surrounding post high school plans needs to change before Decision Day even begins. “I think we have to recognize that these decisions don’t mean the rest of our lives, but it’s what comes next, and we all know that changes year to year,” Beanland said, “and I hope that through doing this assembly, we can start to remove judgement and weight from different choices.” She hopes that younger grades see the variety of options open to them, and understand that they are all valid. “There’s no such thing as a good or bad college,” she concluded, “it’s up to the individual.”

Despite concerns about inclusion, some seniors pursuing options beyond college support the ceremony. Chandler Stevens is one such senior. He has decided to pursue a career in law enforcement. He did not feel judgement for making this choice. “It’s a good idea because it gives the seventh, eighth and ninth graders a better mindset about where they can go and what they can do,” Stevens said.

Fellow senior Liam Robert shared a similar opinion. “I think it’s interesting to hear who’s going to what college,” he said, “and it gives me good ideas about what I want to do myself next year.” Robert decided not to participate because he has not yet made a decision about his future plans. However, he felt no judgement for remaining undecided.

For some, Decision Day simply isn’t worth the excitement. “I don’t mind it, I think it’s a little melodramatic and perhaps unnecessary, but I don’t see a big problem with it,” said senior Ruby Lamb, who is taking a gap year before attending a four year college.

Senior Simon Kennedy, who is taking a gap year before pursuing career options, agreed, saying, “I don’t know if its the best way to express the weight of the decisions the seniors are making.”

Sophomore Sophia Heinz added, “It’s cool that you’re showing what you want to do after high school, but most of the people watching don’t really care.”

The Chronicle interviewed 12 seniors for this article, and found this indifference fairly common. Senior Zak Kline explained, “It just feels like another one of those things seniors have to do…When it comes down to it, you’ll only see like seven of these people again.” Many seniors shared this sentiment, saying, “It was fine,” “I didn’t mind doing it,” and “it was worth the ice cream.”

However, seniors did have several ideas for improving the day while still celebrating their hard work. These ideas included sharing their decisions just to the senior class, and removing the gong (and therefore some of the formality) from the event.

For seniors who did not wish to participate in the assembly, Beanland designed activities so they could still be included. This year, seniors designed paper graduation hats to reflect their choices, and signed a banner.

Beanland believes that ultimately, Decision Day is a positive experience for the student body. “We only experience the things we know from our families and close friend groups,” she said, “and this is just another chance to get more information out there.”