Three Keys to a Great Story: Tips From Extempo Storytellers 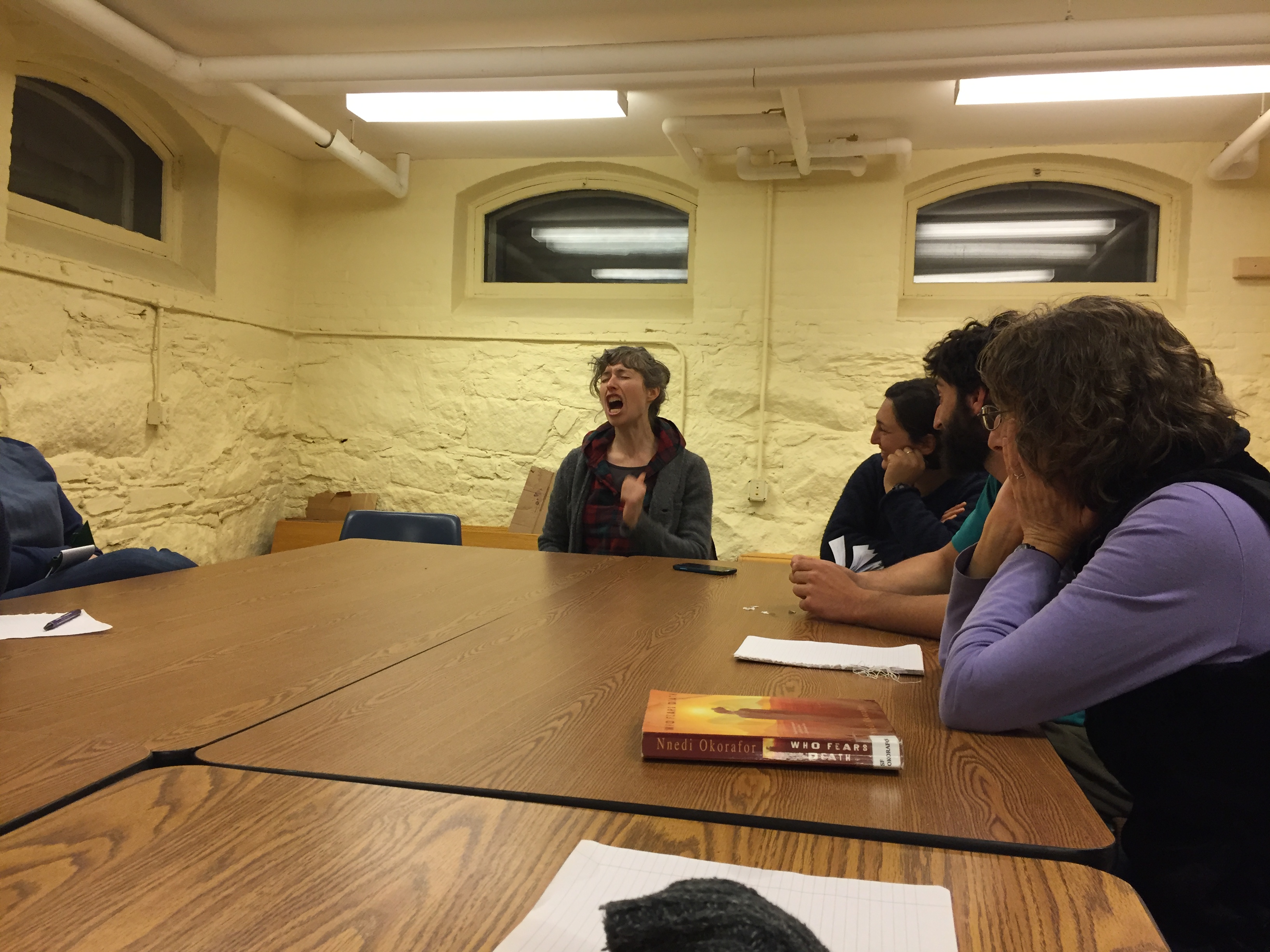 One Monday night at 7:30, Kismet closed its doors to customers and arranged a judge’s table with four chairs beside a small stage at the front of the restaurant. Every seat was full, and late audience members fit into gaps by the door. Plastic cups of curry popcorn were sold for a dollar apiece to attendants as they entered. At 8 o’clock sharp, the chatter died down as a woman moved to the stage: “Welcome to Extempo!”

Extempo, short for extemporaneous, is a live storytelling event. Every month, storytellers from Central Vermont gather together to share, listen, and evaluate original, nonfiction works. Extempo upholds certain core standards. The first and most important is that stories must be drawn entirely from the teller’s personal experiences (“Tell your story from an ‘I’ perspective”), and to participate, tellers must also perform their speech without notes, authentic to the moment

Extempo is only the beginning for some tellers. The most accomplished participant at Extempo is selected by judges to move on to a higher stakes competition, known in the storytelling community as the tell-off. There, the best of the best compete for a cash prize.

Most Vermont competitors are not driven by the prize or glory however. Their passion is what brings them to the art. Local storyteller Leslie Ruster described Extempo as her “church”.

To the uninitiated, these church members were welcoming. They were eager to share why storytelling spoke to them and to encourage others to adopt that same love. Ruster and another fervent teller and U-32 alumni, Ari Erlbaum, hosted a writing workshop in the basement of the Kellogg Hubbard Library for newcomers to learn about the craft. Both there and at Extempo itself, people discussed the skills essential to writing and performing a piece.

A powerful story starts with vivid memories and ends with learning how to articulate those memories to your audience. “You really need to put people into your experience,” said Charlene, a spectator at Extempo, “so they are not just hearing it, but reliving it with you.”

Jacquelyn Fernandez, the seventh storyteller of the night, executed this in her story entitled Citrus Day. She adjusted the microphone before she began:

“From all apparent indications, I am a highly socially competent person. Now.”

Back in elementary school, Jacquelyn struggled to make friends. It all began with her choice to buy pants like MC Hammer in 4th grade. Her difficulties followed her throughout middle school and came to a head on citrus day at Barrington High School:

“There were trucks and truckloads filled with boxes of citrus. It was a frenzy. All the faculty were directing traffic and the whole hallway was filled with oranges that were being offloaded. Parents were there too and the teachers were yelling: ‘Get your student, get your fruit, get out of here!’”

Jacquelyn described sitting atop her boxes awaiting her own parents arrival. Soon, however, she realized the crowd was dwindling: “There was this one girl I’d been watching throughout the frenzy and she was really beautiful and I wanted to be her friend. She had this poise and confidence and this beautiful tiny waist. Her eyelashes were coated in dark mascara. And when it came to that point where everybody was gone, I looked across the way and she also was sitting there with her big tall stack of citrus.

It was like my moment. She was there and I was there and in the excitement that we were both there and in the intoxication of the citrusy smell and the sort of rich, wealthy feeling of possessing all of this fruit, all of these factors combined and drove me to take one of the boxes of fruit and maniacally begin to open and eat the whole box. It was in a manner that was very loud, grunting and juicing and peeling the oranges and looking at her like Isn’t this good?”

The audience dissolved into laughter as Fernandez mimicked wiping her face and grunted into the microphone.

“And she’s looking at me, really smiling and really responding. It’s this secret citrus language that I invented and she’s speaking it with me.”

As Fernandez put the microphone back in it’s stand and returned to her seat, the audience fell out of a trance. They had been pulled into Barrington High School and smelled that “intoxicating citrusy smell” with her.

2. The Balancing of Emotions – Intensity Coupled With Humor

“The day my car was stolen was part of one of the worst weekends of my life. It was the ending of one of my existences, the end of my first marriage.”

Painting an entirely sad or comic picture leaves listeners with a two dimensional snapshot. A good story is one that constructs layers. While it is hard to do this in the Extempo time constraints, Stuart Hancock, this year’s winner of the event, managed by incorporating humor into his story about the upheaval he experienced in 1998.

Hancock went on to fill in the blanks of his weekend, detailing how he packed his car and left behind his ex-wife and two little boys for an “unknown future”. On his journey back to Maryland, Hancock stopped at an island rest area. He used the bathroom and bought a couple candy bars.

“I walked back out of the rest area and right where I had left my car, my car was gone”, Hancock sighed. “I’ll tell you, one of the things that happens when you leave a marriage is that you’ve packed your car with everything that you hold dear.”

Hancock walked around in circles as the highway traffic whizzed passed: “I was so angry, I started to vibrate.” At a loss, Hancock found himself at the counter of the rest area, face to face with a disinterested clerk he deemed the “Slow guy”: “I said to him ‘I’ve got to call the police,’” The teller’s words slurred into one another. “But then this guy said something to me that made me recognize that he in fact was not the slow guy, I was the slow guy. And he said ‘Have you looked on the other side? That happens to people sometimes.’

A murmur circulated among the judges table and the front row as they tried to figure out just what the slow guy had meant.

“I started to buzz and I streaked back into the building and I streaked through it and out the other door and there, THERE was the car that the son of a bitch who stole it and drove it around for 6 minutes had parked it right where he had gotten it from.”

3. Playing Off Your Audience

At a local writing workshop at the Kellogg Hubbard library, Leslie Ruster described her 10 minute layover in Chicago on a recent trip to the West Coast:

“I run to the monitor that shows you what time your flight is coming and I see that the flight that I’m trying to catch is on the other side of the Chicago airport. And for a minute I’m just like Oh my god”

Leslie’s voice dropped to a whisper.

“But then something came over me and I said ‘Leslie, you’ve got this,’ and I run as fast as I can. I weave my way through terminals and past McDonald’s and fast food and something just kicks in. I was a 400 runner in high school and that last straight away, when you come around the final corner, is when you’ve got to give it your kick. My coaches used to just sit on the sidelines and shout ‘RUSTINATOR,’ which was my nickname, they’d say ‘Rustinator, make your move NOW!’

Laughter rose among her small audience and Ruster stood up taller.

“And they’d slam their clipboards. And as I’m running, I just start hearing them all around me ‘Rustinator, RUSTINATOR GO!’.

Her arms pumped and her eyes closed. The audience slid to the edge of their seats.

“Then amongst all these voices in my head I hear ‘Honey, no.’ And I think where is that coming from and I hear again ‘Honey no, NO.’ So I turn around.”

Leslie quickly turned then swiveled to smile at her audience

“And there is this flight attendant and she’s pointing at me then pointing at her butt so I go to look and I think Oh no, OH HONEY NO.”

“My skirt was tucked into my underwear and I had just run from one end of the Chicago airport to the other, exposed.”

The storytellers dispersed into the audience as the judges pushed in their chairs. It was the end of the night. Fernandez found a place at the bar while Hancock mingled with fans by the entry way. Ari, who stood in a mass of friends and family, beamed out at the lively scene. 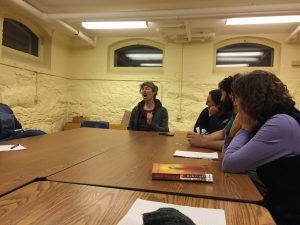