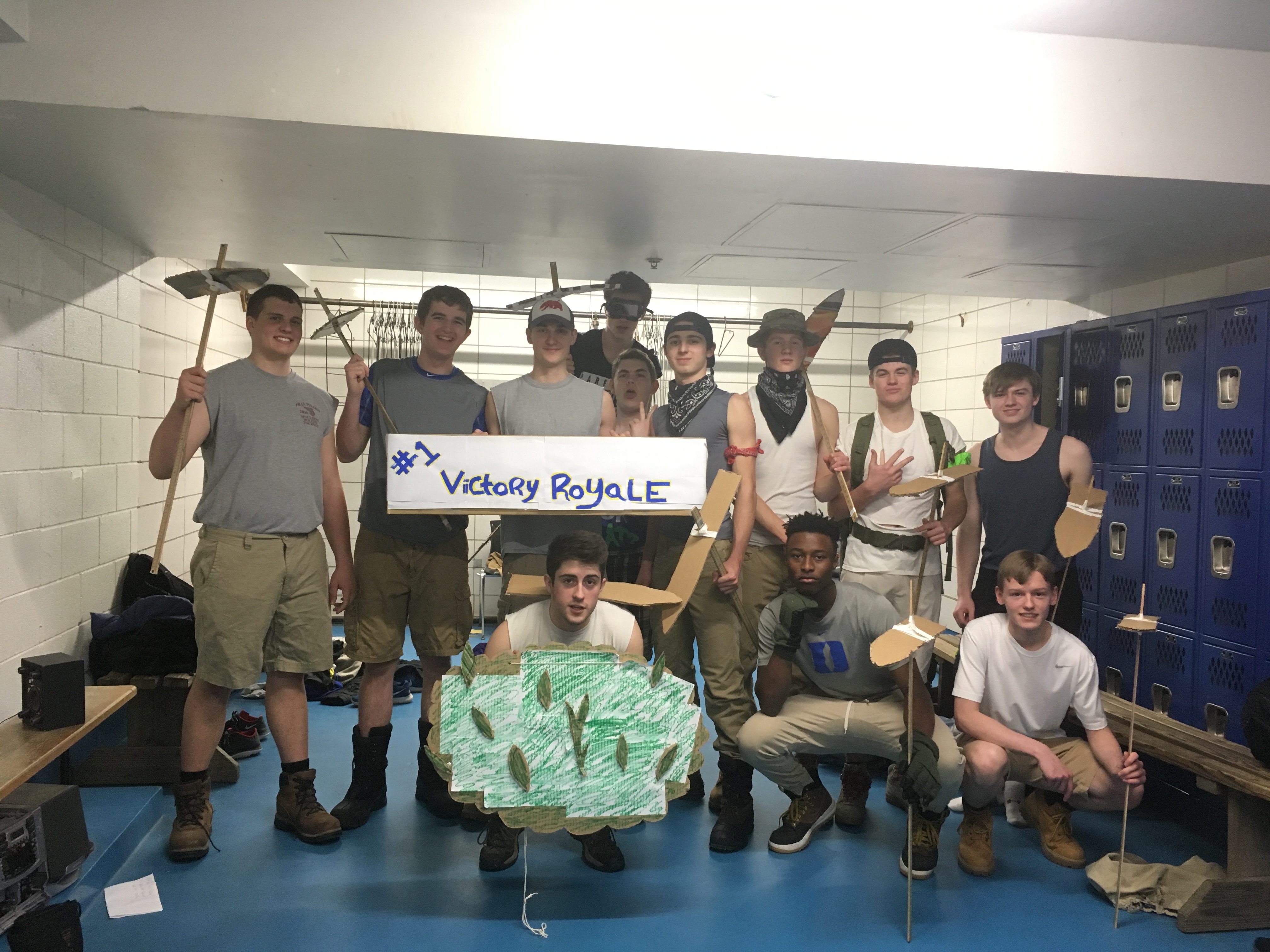 On Friday, February 16th the U-32 high schoolers were gathered for the winter sports pep rally. Packed in the bleachers, they cheered for the teams as they entered the gymnasium.

Most of the team entrances were typical to U-32 pep rallies: funny costumes, dimmed lights, and some music. Each team had a couple of U-32 t-shirts to launch into the crowd.

Then came the boy’s basketball team. The first player entered, limping. The rest of the team followed, wielding cardboard pickaxes, and encircled him.

Then they pretended to hack their teammate to death. 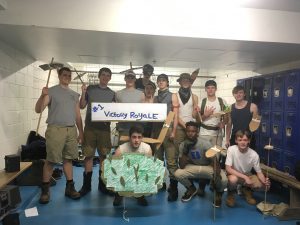 They settled some and the pep rally continued. The attention shifted as toilet paper flew through the crowd – and was later confiscated – and teachers and students were pied.

The skit slipped from the majority of students’ minds – until that night when the following email was sent out:

Today’s pep rally was meant to be a time for our students to come together to celebrate our winter activities.  Unfortunately, one of our sports teams entered the gym and performed a skit that depicted violence.  The skit detracts from the spirit of U-32 and the environment that we as a school want to foster.  I have asked the team to write a letter of apology and I want all students and families to know that as a school we will not tolerate acts of violence, simulated or real.

With the school shooting in Parkland, Florida and the threat of violence against Fair Haven High School in the forefront of our thoughts, we must stand firm and say that any violence real or pretend is not acceptable in our school community.
U-32 is a school that fosters strong relationships that are built on trust and acceptance of all students.  We reach out to each other so that no one feels ostracized or alone, and we value each and every student and their contribution to our community.
I am asking our teachers to have conversations with our students in TA on Monday about how we can foster a strong and safe community that is committed to creating a school free from violence.
If any student feels unsafe or in need, please have them talk to their TA, School Counselor, Administrator, or any other member of the U-32 staff.
Sincerely,
Steven Dellinger-Pate
Principal

This acted as a catalyst for the discussion to follow. By the end of the weekend, the email chain was 59 long. A nerve had been struck.

Speaking with the Chronicle on Monday, Principal Steven Dellinger-Pate said he may have used the wrong word when he asked for an “apology.”  He was looking, he said, “for more of an acknowledgement that [the skit] wasn’t the best way to show school spirit,” and to initiate a conversation.  He has dropped his demand for a formal apology.

“Why is pretending to kill somebody a way to show school spirit?” he asked. “They don’t really go together.  I get the value of it trying to be funny, or fun, but when it comes down to it I can’t condone violence in any form.”

Dellinger-Pate, who had not attended the pep rally, said the strongest reactions came from adults.  He said that, while some students were confused, not knowing the Fortnite game, there were no complaints from students about the skit.  He said adults had felt that, given the week’s national story, the skit had been “tone deaf” and inappropriate.

He said that while the administration does give teams broad guidelines for what is appropriate for pep rallies, students have freedom to create the pep rally without any process for specific approvals or careful oversight.

Senior Hayden Roberge, one of the basketball team’s captains, said the idea came about Thursday night at the team’s pasta party, based on the team’s love for the video game Fortnite.

“It’s a cartoon game where one-hundred people are dropped on a map and have to scavenge for weapons and shield potion, and survive,” he said. As for the skit itself, “it was literally two seconds before in the locker room, thinking of ways to make our costumes more like the actual game.”

Roberge said that during the rally he had only seen people were clapping and laughing in the crowd, but after Steven’s email he saw the skit differently.

“I know it wasn’t school appropriate and could have been taken as offensive,” he said,“but we didn’t intend that.”

Roberge thought the email chain was a positive outcome.

“It’s good students are backing each other up and standing up for what they think is fair,” he said. “It shows unity between students in our school”

Some students questioned the effectiveness of having a conversation via email. “Aren’t we wasting our time using email to just go back and forth about this?” senior Jenna Jerome questioned in her email.

“We should probably stop emailing before it gets worse,” added sophomore Jenna Day.

Dellinger-Pate had his own observations about the mass of emails.

“What I realized in looking at the responses was that students’ concerns weren’t just the pep rally,” he said.  “A lot of things were brought out– people dumped their problems into that email chain.”

In his follow up email on Sunday, Dellinger-Pate proposed that students could meet with him during regular callbacks, to improve communication between the students and administration.

The immediate responses to Dellinger-Pate’s email about the incident – a chain of nearly sixty student responses in the first twenty-four hours – included some profanity and disrespectful language, but many students also took time to write long, thoughtful comments on the controversy.

The Wrong Time for Violence?

The basketball team’s skit came at a moment of heightened sensitivity around violence, just two days after seventeen people were shot and killed at a school in Parkland, Florida,

On the email chain, sophomore Willa Lane noted that “we have experienced 18 school shootings this year” in the United States.

“It was not an appropriate time or place to depict this type of violence,” she wrote, “especially given the setting and that the entire high school was in attendance.”

Lane referred to a study from the National Center of Health Research that had found a correlation between video games and real-world violence.

Junior Owen Guthrie fears that U-32 isn’t preparing him for the ‘real world’. “If we are spending our time shielding students from cardboard pickaxes,” he says, “when we hit the real world it will be like getting hit with a freight train.”

Some students felt that Dellinger-Pate’s email had blown things out of proportion by connecting the pep rally skit to the violence in Florida.

“[The skit] was an attempt to strengthen our community, not divide it,” wrote senior Shannon O’Kelly (also a Chronicle editor).

“To discuss this in comparison with the devastating violence that has occurred in the last couple of days is not productive. It is a distraction from the real, uncomfortable, and upsetting topics that we really need to address.”

In his interview with the Chronicle, Dellinger-Pate explained that part of his reaction to the incident came from his own experiences as an educator.  He was working close to Sandy Hook, in Connecticut, when twenty children and six educators were killed in 2012. One of his close friends had a fifth-grader in the building and had nearly been hired as the principal at Sandy Hook Elementary (where the principal was killed) and a teacher in his district lost a child.

“So I am overly sensitive to these kinds of events,” he said. “I have to make sure we continuously keep ourselves aware, and not become desensitized to it.”

“All the other stuff we can do– armed guards, metal detectors and all that– will not make us safe.  It will make us pretend that we’re safer,” he said. “But to be safe as a school it’s that we develop strong relationships and care for each other.”

A Problem With School Climate?

The pep rally controversy sparked a wider conversation about the administration’s  priorities, and inconsistency in rules and enforcement.

“What about the vikings?” Junior Grae Moriath asked in thier email, referencing the boy’s cross country team and their costumes. “Why should they be able to run around shirtless in front of the whole school?”

The U-32 dress code prohibits clothing that is “excessively revealing” and exposes the “chest, abdomen, navel, buttocks, or underwear.”

Many students wondered why the the team was not spoken to about their costumes – especially as rumors circulated that the girl’s cross country team had been spoken to by administration about their 80’s workout costumes. These rumors later proved to be untrue.

Another student, senior Ian Voyer, brought up that the cross country team had their own cardboard weapons. They were not reprimanded.

“If [the skit] is considered too violent, then what about throwing pies into people’s faces?” Junior Robyn Dudley wrote. Pieing select teachers and students has become the traditional ending to pep rallies in recent years.

“Both performances were consensual,” Dudley wrote. “Where do we draw the line?”

Students also suggested that the Administration should be focusing on more pressing issues.

“U-32 has spent more time on these cardboard pickaxes than they did on reconsidering our contract for renewable energy with the [Kingsbury Dam],” junior Owen Guthrie wrote.

(You can read more about U-32’s relationship with the Kingsbury Dam here.)

Throughout the chain many students addressed the larger issue of student voice and censorship.

“It was a joke. Please,” wrote sophomore Jordon Blow. “When we start to censor humor, everything else will fall as well.”

“Not to long ago, you released a video saying that no one is left behind and how great the school is over jangly guitars,” he wrote, referring to this video from the Vermont Agency of Education.  “But when I walk into TA, I don’t feel welcome.”

Junior Anthony Rowell wrote“Administrators are, as I said, silencing the student body on [their] creative aspects. Which U-32 is a firm supporter of , or so they say…”

Sophomore Kyley Sullivan agreed. “[The basketball team] should not be punished for expressing themselves, which is, after all, what U-32 stands for, as far as I know.”