The Panera Menu: How to Get the Most Bang For Your Buck

You throw open the glass front doors of the Berlin Panera and enter the warm environment of your everyday oasis. As you respectfully stomp the dirt and snow off your shoes, the sweet smell of freshly-baked Chocolate Chipper Cookies® wafts into your nose. You cast a quick glance over at the pastry display and stroll over to a register where a smiling cashier welcomes you with warm, personal greeting. You swipe your MyPanera card through the VeriFone and cast your gaze upwards towards the menu. A million questions race through your mind as you stare blankly at the complex maze of prices and names. “What is a Bacon Turkey Bravo®?” “How do you pronounce Frontega?” “What is the ancient grain salad?” “How ancient are the grains?”

All of these questions can be answered by a simple economic concept known as choice architecture.

In economics, choice architecture is the concept of presenting options in a way that influences the consumer to make a certain decision. (4) The Panera menu is filled with examples of these strategies which benefit the company’s bottom line. While there are many aspects of the Panera experience that have elements of choice architecture – from MyPanera rewards to customizations of food items – the three most common can be seen in the 99¢ pastry deal, the You-Pick-Two®, and the sides included with any meal. Understanding these strategies – and when they can hurt or help the consumer – can help us get the most bang for our buck when enjoying the 100% clean food of the Panera bakery-cafe in Berlin.

The catch is, you can only qualify to get the pastry when you purchase a drink with your meal. That’s simple enough – just get a drink to access this amazing deal. Most customers agree that the drink caveat isn’t a huge deterrent. Upon being questioned about his decision to purchase a fountain drink in order to get a pastry, John, a Panera customer, claimed “The cinnamon roll looked so good. And I thought that getting it for 99¢ would be a great deal.” (3) What John didn’t realize was that he paid $3.28 ($0.99 [for the pastry] + $2.29 [for the drink]) in order to get a pastry that he could have bought for $2.89 (6). Poor John. 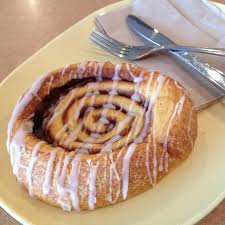 Would you be able to resist this delicious cinnamon roll?

The is an example of choice overload. Providing many options and having the cashiers ask the customers countless questions contributes to this cognitive overload and distracts the customer as they spend more money. Panera is attempting to make the opportunity cost of understanding the menu lower than the cost of your time and mental capacity, both finite resources. After being drilled about MyPanera cards, sides, drinks, plates, mugs, cups, etc., the average customer doesn’t have enough available patience or attention span to stop and think about the economics of the deal in which they are choosing to participate. (7) But can you really blame them? The only scenarios where buying the drink in order to get the pastry will save you money is if the drink is espresso, milk (chocolate or plain), hot tea, apple juice, or a small coffee and the pastry is the cinnamon roll (6). Would you have the time and energy to stop and try to figure all that out? No? That’s why I did it for you.

When making decisions about what to purchase at Panera (or any restaurant for that matter) try not to get lost in the questions that the cashier asks you. Simply being aware of tricky choice architecture techniques is a big step towards learning to avoid them. Once you do that, all that’s left is staying alert in the face of potential confusion. 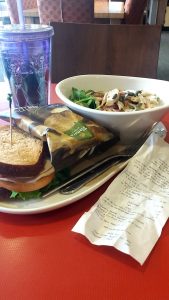 One of Sam Darmstadt’s many meals that he’s eaten at Panera. As an elite menu-hacker, Sam Darmstadt is able to save loads of money when he eats at Panera, as you can see on his receipt, he payed $0.00 for this meal.

That comes with a side of baguette. Is that okay?

If you are a Panera regular, you may have noticed that the cashiers have switched from asking “Would you like chips, apple, or baguette with that?” to “That comes with [insert side here]. Is that okay?” (8) A choice architect might explain this change in phrasing using the idea of defaults. This sub-concept of choice architecture makes it easier to make one decision rather than another. If someone is offered one thing, most of the time people will go along with the choice they are offered in order to avoid the hassle of exploring and picking another option.

Each meal item at Panera has a set default side. The baguette is the default side for pastas, soups (even in bread bowls), salads, bowls, and any You-Pick-Two®. This leaves just kid meals and sandwiches with a different default side (yogurt and chips, respectively) (6).

An email to employees about the script change suggested that the change was to make the cashiers “sound less robotic” (8). But looking at defaults suggests an alternative explanation. As found during my investigation, the side of baguette has a retail value of 75¢. Meanwhile, an entire baguette costs only 3¢ to make. (1) This overwhelming profit margin for the most common default side could suggest that the script change was designed to sway customers away from the more expensive side options – which they would receive at no additional cost – and towards the product that costs the company less.

If the price of a side reflects your enjoyment of it (though I’m not saying it does or should) you should understand defaults. If you inquire about options other than the default you can get chips, an apple, a sprouted grain roll (all retail value of 99¢) or even a yogurt tube (retail value of $1.19) at no additional cost. (6)

Would you like that as a You-Pick-Two®?
The You-Pick-Two® is an essential part of Panera’s menu and is a somewhat complex system that can both help and hurt you in your quest to get the most bang for your buck. While there are many questions that we could explore in the You-Pick-Two®, we will focus on soup since it is slightly more complex. In an interview with the Panera employee, Kayla Beard, she reminds us that “a cup of soup is two ladles worth but the bowl is only three.” So unlike other options – like sandwiches or salads – the You-Pick-Two®  portion is not half of a full portion. Kayla reasons that this is because “four scoops is a lot of soup” (1). 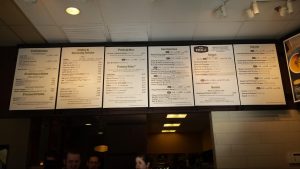 One customer that I interviewed, Gayle, had purchased a You-Pick-Two® with two cups of broccoli cheddar soup. When questioned about her purchase, she responded that “The Pick-Two price is lower than the cup of soup price so I thought it would be cheaper overall” (2) Was she right? A bowl of soup and a You-Pick-Two® with two cups of soup both come with one side (let’s assume baguette). Adjusted for the $0.75 retail price of the side, the prices would be $4.74 for the bowl and $7.03 for the You-Pick-Two® (6). The price for the two cups is approximately 1.48 times the price of the bowl but gives you only 1.33 times the soup (1, 6). It looks like Gayle lost out, too.

The trick here is  layout of options. Choice architecture refer to this design as a “nudge” because it pushes a customer towards certain choices. (4) On the menu, the lower price for the You-Pick-Two® is highlighted right next to the higher prices for other options. This gives the illusion that it will always be the better option. (4) The attractive layout nudges the customer towards that choice even if it isn’t the best one for them.

Are these all the possible way that Panera tricks its customers into spending more money? Not even remotely! Finite corporate greed? Inconceivable! However, understanding simple concepts in microeconomics such as choice architecture can help you stop being taken advantage of, and give you the upper-hand in getting the most bang for your buck from any menu.