Local Art: The Stories Behind the Prices 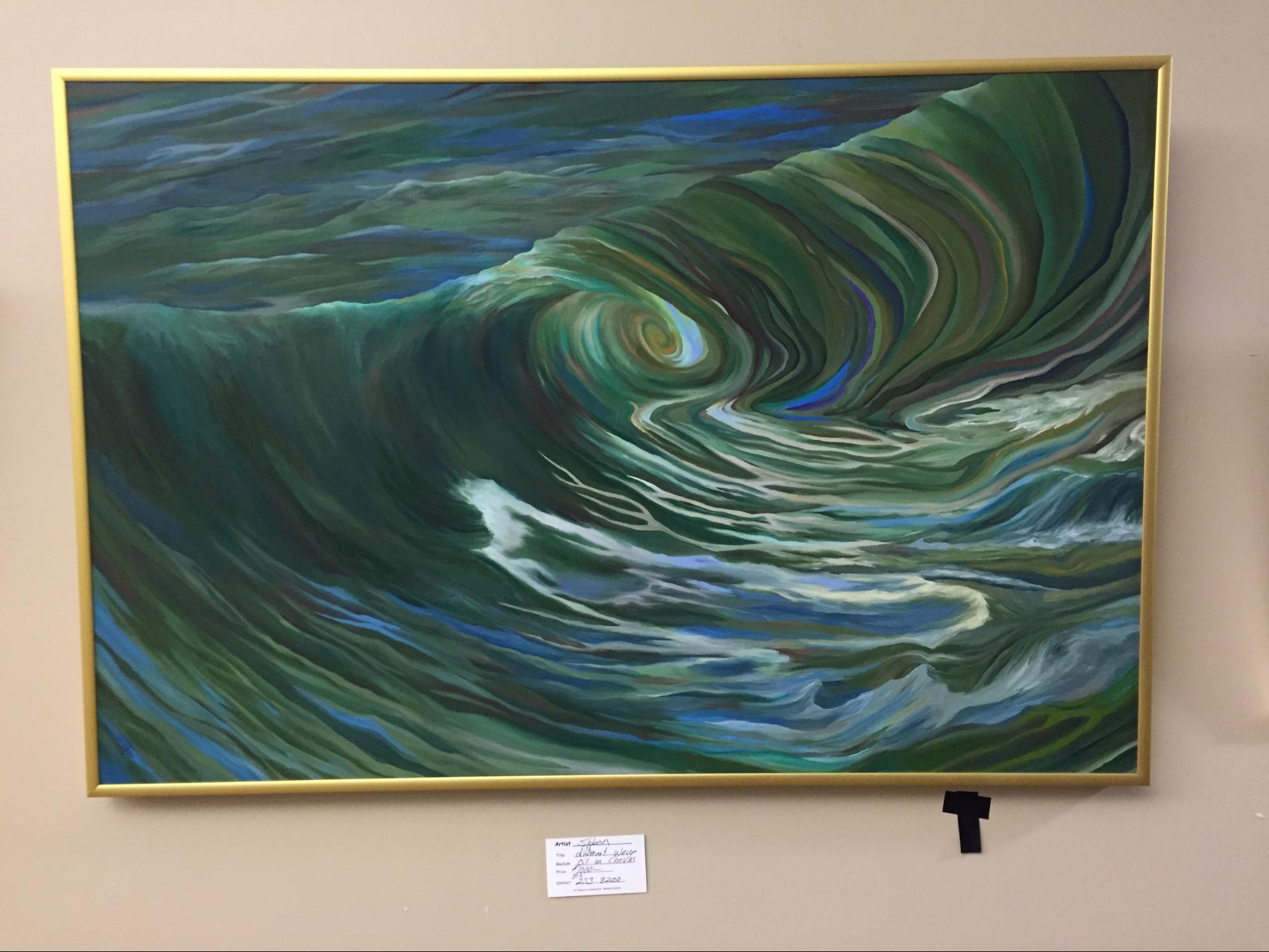 Willis Backus stands solitary, encompassed by four glass cases of colorful jewelry. This is his counter– he’s earned the right to call it that. The only vacation he’s ever taken was in 1975, when he had a heart attack.

“I don’t even take weekends off,” says the self-professed workaholic. “Sometimes I work for a year or two in a row without a day off.”

Nearly every item for sale in Cool Jewels is shockingly low-priced. Fiddling with a jade bracelet marked at a mere $4, Willis explains that the prices are not primarily a reflection of quality, but rather of high supply and low demand. Two decades ago, Backus bought a tractor trailer load of products for $20,000.

“I call it ‘the gift that keeps on giving ’cause I got cases and cases and cases, and stuff still to sell,” he chuckles painfully. With such a large investment in a huge stockpile, he has to mark items down every day to get them to sell, just so he doesn’t lose money.

Across the street in the City Center, a gallery is displaying paintings ranging from $150 to $1,500. A block over, Maiden Voyage and Boomslang are playing at Sweet Melissa’s, charging a cover of $10 for minors and $5 for adults. On the other end of the street, Buch Spieler Records is hosting their bi-annual Record Store Day, with some vinyl records for sale at over $100. There is nothing out of the ordinary about these prices, but how were they determined? 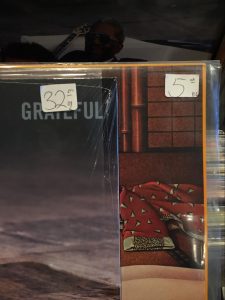 Music floods Langdon Street through the open door of Buch Spieler Records. Knayte Lander, one of the co-owners of the store, thumbs through the vast $1 vinyl record section. Several feet away, the shelves house vinyls in the $20 to $35 range. According to Lander, “condition, recording quality, and artist popularity” are the main factors that dictate price. Every vinyl record has a serial number that, when entered into a search engine, produces listings of similar records. Sellers use these comparisons to determine a record’s value. (1)

Among the variables that determine a record’s price, time carries the most clout. When an album comes out, it starts at a relatively high price. Over the next decade, as it becomes less relevant, the price falls significantly. But its decline isn’t necessarily permanent; a phenomenon occurs, where at a certain age, records come back, just as trends do.

At the register is Xavier Jimenez, the other co-owner. The song scratches to a stop as he carefully lifts a reggae record from the turntable, swapping it for acid jazz. When he and Knayte purchase records from one of their suppliers, he explains, the math is fairly consistent.

“We buy [records] outright, with a 30% margin of the profit.” Exactly how much profit that is depends on the time frame they are sold in. Much like the stock market, profiting from record sales is all about timing.

Consider High on Mount Rushmore by Mount Rushmore, a band most people have never heard of: their record is for sale at 20 bucks, 50 years after its release. Even more surprising is the faint inscription on Mike ‘Bull’ Bolan’s midriff: “10¢”. 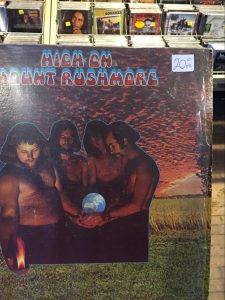 An unpopular band’s music might be next to worthless when it comes out, but half a century later, its value no longer depends on how good it sounds. An album like this is coveted by consumers who want to send a signal that they have obscure tastes, and don’t buy into the mainstream, which nowadays equals cool. That demand, combined with the record’s scarceness, is why the price is high. 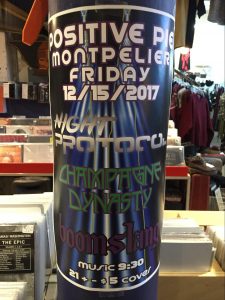 Knayte Lander is also a member of multiple local bands. A poster in the vinyl aisle advertises an upcoming show featuring his punk group Champagne Dynasty. This particular show is 21 and over, but Knayte occasionally plays gigs that allow all ages. Like records, the price of performances is heavily dependent on the artist’s popularity, but in small local gigs, the age of the consumer makes the biggest difference.

“[Minors] get charged, say, 10 bucks to go to a show, and everybody else pays 5 bucks. The reason is because you can’t buy alcohol, which is where they make their money.” Knayte’s thesis on success is simple: Bands that sell more drinks get more gigs.

“Everybody in there that isn’t buying drinks kills it.” When people go to shows, they are signaling their inclusion in a group that likes to cut loose and enjoys similar types of music. Venue owners can capitalize on this desire.

There is no single formula for how businesses pay performers. It varies widely, depending on the status and genre of the performer, type of venue, and even time of day and day of the week. (2)

“When my band Chalice plays at Charlie-O’s, they’re like, ‘Alright, you guys get 300 bucks, as a band.’” Because bars are basically guaranteed that every present person will buy drinks, they can afford not to charge a cover. The $300 Knayte referred to is a flat rate, meaning that even if no one showed up, his band would still make their promised amount, and conversely, even if the place was packed, they’d still only make the $300.

On the other hand, restaurants allow artists to charge a cover and offer them a percent of the bar, because it is not guaranteed that every customer will drink, especially if the show is all ages.

“What Positive Pie might say is, ‘Alright, you guys can charge a $5 cover, and you get a percentage of our sales,’” Knayte says. “So we get all of the door [money] and 10% of the bar, or  something like that.”

This arrangement is more codependent than the first; the band only does as well as the restaurant, and vise versa. The band’s revenue depends on two things: first, how popular they are and how well the event was advertised, and second, as Knayte said earlier, how many drinks they can get people to buy. 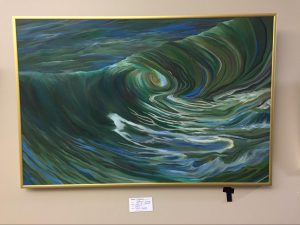 Visual art in a gallery and live performance at a venue are alike in that an artist uses a business platform to sell their art. The idea is that both mutually benefit, but the middle men usually collect the bulk of the profit, while the artist’s largest gain is the public exposure. However, as artists gain traction and begin selling more, they can begin to negotiate the percentage the gallery takes, and eventually even dictate it. (3) Unfortunately, for artists like Sabon, the creator of the painting above, it’s hard to reach that level of status.

Sabon prices slightly differently than most artists: he doesn’t account for the cost of materials. In addition, if he deems one of his pieces low quality, he chops its price dramatically.

“If a painting takes two weeks, I’m gonna charge over a thousand dollars. But if that painting isn’t all that good, I’ll bring it down to six to four hundred dollars.” These marketing approaches take a toll on his profits, and are likely the biggest reasons Sabon has not seen a rise is his sales over time.

“I’m surprised, because I see other artists who are doing just fine,” he sighs. Many of those other artists charge just as much or more than him for pieces they spent a fraction of the time making.

“Maybe they have a following. Other people paint loose, or even worse, and they get paid good money,” Sabon says. “I’m like, ‘OK.’”

Consider the following piece, entitled Loose Ends. What seems like a reasonable price? 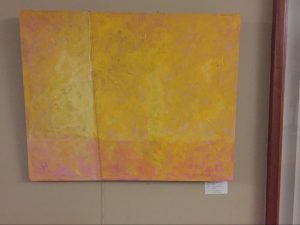 Many would find that figure egregiously high, and wonder what this painting has that a concert, or a record, or a silver bangle doesn’t.

Attending a concert or getting earlobe gauges signals one’s inclusion in a group, but owning an artwork that no one else has access to sends a different signal: it sets the buyer apart. Obsolete records can be sold for a lot because of their scarcity, and paintings are expensive for the same reason.

Art is a source of signals we all send. The human desire to express and communicate is what keeps the art market afloat. In the wise words of Willis Backus, “As long as you’re selling useless things to people who don’t need them, you’ll never go out of business.”