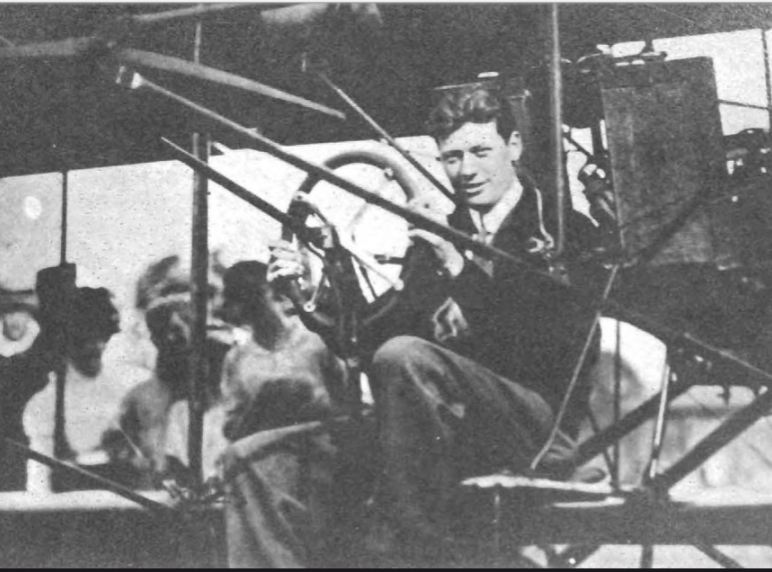 On September 2nd, 1913, a crowd of around 500 spectators assembled on the fields of the Rutland Fair to watch George Schmitt fly in his Baldwin Red Devil biplane. (10) The machine, little more than a few metal rods and sheets of cloth strapped around a chair and steering wheel, probably didn’t seem worthy of the eighty horsepower engine that powered its one propeller. (6)

Hot air balloons filled the sky already, and that year was set to be one of Rutland’s greatest celebrations yet. Red, white, and blue decorated not only the fairgrounds but the entire town, and something was happening everywhere. Not only parades and contests, but some contributors even showed trained animals or told fortunes along the streets. (10)

Amongst all the commotion, George’s Red Devil biplane probably seemed barebones at first. An improvised passenger seat sat among exposed control wires close to the hot, heavy radiator. The grinning 21-year-old in front of the craft had no formal pilot training. (3, 5, 6) But George Schmitt knew what he was doing, and each time he fired up the engine it was no different from any other of his over eight-hundred takeoffs. (6) 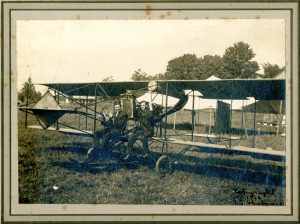 Schmitt’s career in aviation had sparked in his late teens, leading him to build and launch a full-size glider with his brother at his house in 1909. George absorbed any information he could about aviation, even giving up a career in electrical engineering. (9) It wasn’t long before he agreed to attempt the first motorized airplane flight in Vermont at the 1910 Rutland Fair, although he’d never flown anything besides his glider. Unfortunately the Curtiss plane he’d bought not only arrived late, but also damaged. Some loose valves prevented the engine from starting properly at the fair, and he never made any true flights. Schmitt still insisted on flying his faulty airplane for short “hops” on the fair’s third day at another field. (5) “George Schmitt, who is 19 years old, is probably the youngest aviator in the country,” the Bennington banner speculated as it followed much of his progress. (2) 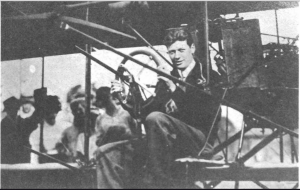 Schmitt before making a flight over Rutland in 1912 (6)

Aviation took over Schmitt’s life. From establishing his own company to travelling around the Western Hemisphere, Schmitt flew in exhibitions everywhere. (13) He returned to Vermont often, and appeared at fairs all around the state. The Barre Daily Times marvelled at Schmitt’s performance in the 1912 Dog River Valley Fair, considering his flights the “feature of the day’s programme.” (1) But for all his progress and devotion, the 1913 Rutland fair was going to be his last. Schmitt promised his mother he’d quit aviation on the 4th of September that year, and a growing sense of finality must have hung in the air for him as he readied his aircraft in the final hours of that day. (11)

It was six o’clock by then, Schmitt had returned from delivering a pouch of mail to the local post office as part of his exhibition. A line of men waited their turn on the green field among the spectators, and it happened to be Assistant City Judge J. Dyer Spellman who stood next. (7)

Starting down the runway, “both men were in the best of spirits… the Red Devil rose from the ground apparently without an effort, and, when it reached the west end of the field, headed South. In graceful, sweeping curves it circled the field once,” the Rutland Herald reports. (11) Schmitt was in his element, and Spellman was having the experience of a lifetime.

But that day above the Rutland Fairgrounds, events took a dark direction. As George’s mother watched from their nearby house, the loud thrum of the engine holding the machine aloft cut suddenly short. (4, 11) Its horizontal form, five hundred feet in the air, tipped suddenly to point its nose at the ground. The confused crowd could only stare as the wonderful birdlike invention, without any warning, smashed head first into the earth. (6, 11)

“… scores of men started for the spot. Among them was Charles Schmitt, brother of the aviator. Those who first arrived at the scene found both men buried beneath the twisted and tangled wires and rods.

“Spellman was first removed. He was conscious, despite the fact that his coat and underclothing had been burned from his back by the heat from the exhaust. Schmitt’s crumpled form lay beneath his 280-pound engine,” recounts the next day’s Rutland Herald, “Hundreds of hands lifted the engine from his unconscious body.” (11) 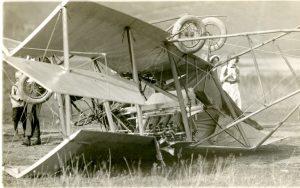 It was too late, even after George’s brother pulled him from the wreckage. Another newspaper, The Barre Daily Times reports some of his final words to Charles at the site: “‘I don’t know what the matter was. It was not my fault and it was not Dyer’s.’” (7, 11)

A debate of the actual cause of the accident immediately arose. As blame and specifics were tossed around, the basic reason for the accident became clear. Charles himself claimed in a letter to Aero and Hydro magazine just days after the accident that Spellman had accidentally “stood on three rear control wires which passed between his legs” in a moment of panic when the engine began to misfire. (6) Around three years later The Brattleboro Reformer directly attributed the accident to “the fact… the seat on which Attorney Spellman sat was temporarily rigged up.” (3) Schmitt’s own reckless ingenuity had in the end been his downfall.

The 6th of September, four days after the accident, George’s home city of Rutland closed down all business in memoriam.  Hundreds paid their respects at the service provided by the local Congregational Church, praying and sending tribute in recognition.  “Never was such a collection of flowers seen before the funeral of a young person in this city. ” the Barre Daily Times described. Schmitt was buried in his family’s cemetery. (12)

The city of Rutland seemed to set itself aside for Schmitt that day, and in the time since, the town has made effort to recognize him periodically in souvenirs like postcards or stamps. (12) Even a century later, a memorial was placed at the edge of the Fairgrounds by S Main Street in Rutland: a testimony to a time past, when obsessed amateurs like George Schmitt controlled the course of aviation. (13) 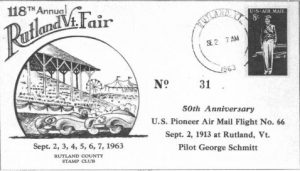 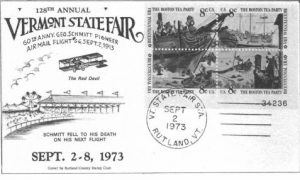 [1] George Schmitt and his biplane on the field at the 1913 Rutland Fair. Vermont Historical Society.

[2] George Schmitt flying in his biplane above the 1913 Rutland Fair. Vermont Historical Society.