Goal-Gradient Theory: A Tool For Thinking About Proficiencies 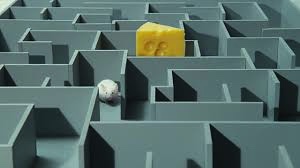 “Imagine handing a saxophone to somebody that had never played before, and handing them a middle-school level piece of music,” says David Powelson, sitting at his desk in the band room. “The resources are out there, they could sit down and learn it, but they wouldn’t.”(6)

The scenario David is describing is explained by a concept called goal-gradient theory. This hypothesis suggests that as people get closer to a goal, they work harder to reach it.(2) 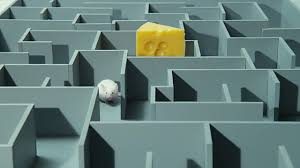 Animals exert more energy as they approach a goal(1)

In a lab experiment, rats in harnesses navigated a maze with a cheese reward at the end. Some rats were stopped inches from their goal, while others were stopped much further away.(2) The rats that were closer to the cheese tried harder to complete the task than the rats that did not see attaining their goal as a probable outcome.(4) This study was the first way scientists observed goal-gradient theory.

In one study, economists found that participants in a café rewards program purchase coffee more frequently as they get closer to earning a free cup. If they are given a card that has eight total hole punches needed before they get a free coffee with two already punched, they are more likely to use it than if they are given a card with six punches left and none already completed.(6)

In proficiencies, progress isn’t obvious. Students receive a score of one, two, three, or four on many individual skills. Since these scores change as students move towards proficiency, final grades may not be accurately calculated until the end of the marking period.

“Depending on how the teacher has things set up, they may not see a final grade for their course at all,” David Powelson explained, “which is a problem that we are working to fix,”

Since proficiencies focus on long term growth, both David and English teacher Erin Mooney feel that individual assignment grades shouldn’t be discouraging. David tells his students,“If you’re working on learning what you’re supposed to be learning, it will be fine.”(6)

There is also uncertainty about what numerical scores mean. “They are confused because teachers use the word proficient to mean different things,” David explained.

In other words, the mouse knows there is cheese in the room, but doesn’t know how close it is.

Erin cited a lack of standardization between classes as one source of this confusion. For example, in a class that’s learning a new skill, a three may be given for basic understanding. In a class reviewing an old skill, a student may have to show complete mastery for a three. In both cases, the student is “proficient.” Erin feels the flexibility of the term is unavoidable because students have different levels of familiarity with skills and each subject requires different learning strategies.(7)

Teachers use rubrics to communicate these expectations. The rubrics were cited by several freshmen as the main way they see their progress. (5) 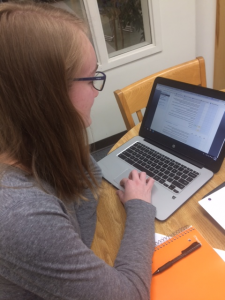 “I see evidence of my progress in my proficiency rubrics” (5)

Another challenge of proficiencies is the scale the system uses. Previously, students had 100 possible grades. Now, there are four.

“There are kids that are just barely at 2…and the high 2 is kids that are really close,” Erin observed, “And there’s no gradation there.”(7)

Erin noted that a student may use evidence well and introduce her quotes when writing a paragraph, but leave a piece of analysis out. That student is on the verge of proficient, but she doesn’t see that in the 2 she receives. Goal-gradient theory hypothesizes that seeing how close she is to proficient would be motivational for the student.

“Students have to meet a whole bunch of learning outcomes. And they have to want them.”(7)

In every scientific study previously discussed, the goals are immediate. Coffee consumers can judge how quickly they will reach a free cup, and survey takers understand that it will not take them long to complete three more questions.

Timelines are longer in a proficiency graded system because there are no deadlines for learning. “If it takes one kid three years to learn his major scales,” said David, “that’s fine. At the end of three years, [he is] proficient.”(6)

However, it’s unclear whether allowing for more time makes the goal appear closer by making it more realistic, or further away because it takes longer to achieve.

Long term goals are also common in proficiency grading because many of the skills students are developing are designed to prepare them for life after school. For example, public speaking skills may help students give presentations at a future workplace. Erin tackles this by trying to make the skills relevant to the lives of high schoolers, emphasizing that the ability to express oneself is crucial at any stage of life.

So far, there have been no goal-gradient related studies concerning motivation over such a long period of time.

The same tactic is used in classrooms.

“If the teacher gives us a huge presentation assignment that is due in one month, I am reluctant to start right away,” one student noted. “But, if I start doing it little by little each day until I am half done, I figure why not just do the other half all at once.”(5)

Proficiencies create small goals by focusing on process and progress as well as product. In a standard grading system, the goal would be comprehension of a unit. In a proficiency system, a student that isn’t yet mastering an entire concept can still develop new skills, allowing them to accomplish smaller goals.

As Erin summarized, “They can be graded according to making progress… not based on whether they hit the end target.”(3)