Not Your Average “Gung Ho” Suffragette 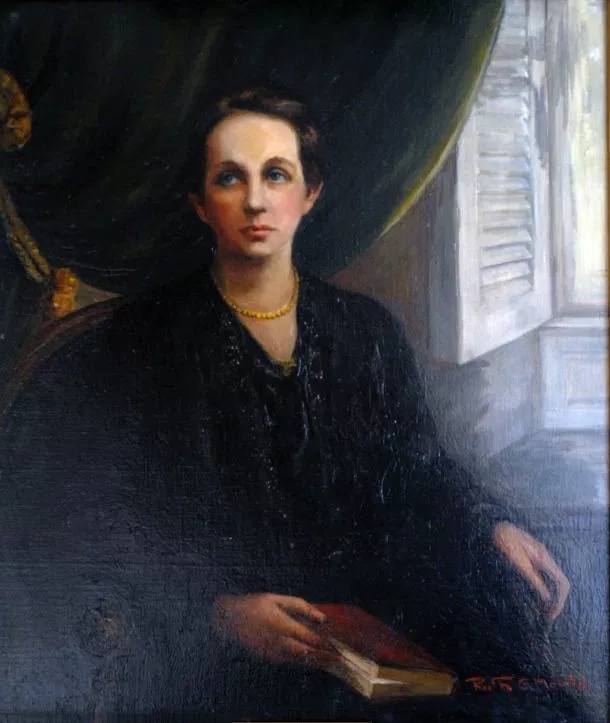 This is the first piece in a series about what our community was like a century ago.

January 4th, 1921, was a cold, rainy day. (7) A line of men filed into the Vermont Statehouse for the 26th biennial session,  and something was out of the ordinary: a woman had been elected to the Vermont House of Representatives. (7) Her name was Edna Beard, a 44-year-old teacher from Orange. (12)

Representative Smith, of Landgrove, made a motion allowing Edna to choose her seat first. (7) She selected seat 146, near the Speaker’s rostrum. (7)  The first five or six men filed into the chamber, leaving the seat next to her vacant. (1) Much to Edna’s surprise, Horatio Luce of Pomfret sat down next to her. (4,1) The house rose to their feet with a round of applause. (1)

While Edna Beard was the first female representative to the Vermont House of Representatives, and later to the Senate, she did not call attention to herself, and few Vermonters remember her today. She may not be well known, but her legislation reflected her unique perspective as a woman in a male-dominated field.

Edna’s niece, Elsie Beard, resides at The Gardens, an assisted living facility in Williamstown, Vermont. Her apartment is cluttered with boxes and documents– she donated one box of the Beard family papers to the Vermont Historical Society. On a recent afternoon, as she took time to talk about her aunt. A framed picture of Edna hung on the wall next to her. 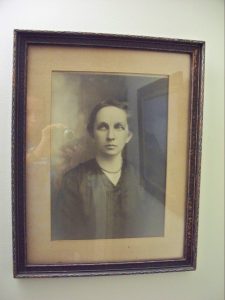 A framed photo of Edna hangs on the wall in Elsie’s apartment.

“The family’s lived in Orange since 1800,” Elsie said, sitting back in her recliner,“…they’ve always been in town politics…”(1) Edna “was involved in everything.” (1)

Elsie mentioned that before Edna’s election, members of the House were referred to as “Gentleman from [their town]”.(1) The state auditor, state treasurer, and secretary of state held a meeting after her election.(1) They decided to refer to everyone as “Member from….” (1)

Coming from a teaching background and a farm family in Orange, Beard’s election was almost an accident. (1)

Born in 1877, Edna graduated from Spaulding High School in 1896 and became a teacher in Orange, which in 1920 only had a population of 485 people. (4,11) She boarded with her students, but according to Elsie, “she always went home on the weekends because her mother was invalid. She never had a home of her own; she lived with her mother.”(1) Edna’s mother had rheumatoid arthritis and was in a wheelchair.

Edna and her brother, Frank Beard, cared for their mother on the family farm. (1) Frank later served in the House of Representatives. (1)  In 1912, when Edna was 36, her father died and she assumed his responsibility of town treasurer. (1) She was Orange’s first female treasurer. (1)

“[Edna] was appointed treasurer and I’d always wondered if women couldn’t vote, how come they could hold office?” Elsie wondered. (1) She later learned that woman could hold small political offices such as town treasurer before they could vote. (1)

After completing her father’s term, Edna was elected town treasurer, one of many roles she served in Orange. (1) She was a member of the local grange and town church, and helped put on community plays. (1) She was also the school superintendent for Orange. (1) According to Elsie, “everything that was going on in Orange, she had something to do with.” (1)

Elsie also stated that, “Edna was an excellent horsewoman, she had her own horse and buggy and everywhere she went to, she drove to.” (1) She never owned a car, which was uncommon as cars became more prevalent in rural communities. (1,13) While Edna was old-fashioned in her transportation, she pioneered politics for Vermont women.

Come August 1920, a Republican man from Orange was running unopposed. His name was Burt Richardson. (1) 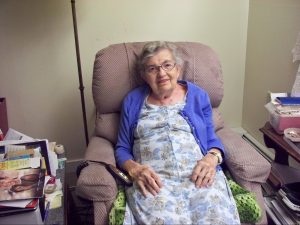 Elsie vividly recalled the story of Edna and Burt in her interview. (1)

Elsie chuckled and shook her head. “[Burt] always had some excuse why he couldn’t work,” she said with a grin,“… the family was respected, but he was just… what he was.” (1)

There was a story circulating in which an Orange resident had a valuable coin, stating that, “if anyone catches Burt Richardson working, I’ll give him this coin!”(1) Burt was known as loud, argumentative, and not “a fit person to represent the town.”(1) Edna knew she needed to step in.

Her campaign was understated. According to Elsie, she wasn’t “one of those gung-ho women that was running around making speeches,” like other suffragettes of her time. (1)

She met with a lawyer, Earl Davis of Barre. He was the father of Dean Davis, who became Vermont’s 74th governor. (1) Davis helped her organize her campaign and get on the ballot. (1)

Davis recommended that she run under the ‘Citizen’s Party’. (1) This was not an actual party, but Davis “advised her that it was an attractive name… that’s the ticket she ran on.”(1)

Edna won the election, saving Orange from Burt’s inconsistency and laziness. “You wonder why [people] would’ve voted for Burt,” Elsie exclaimed. (1) Her only explanation was that “people thought, ‘oh well, that’ll keep him busy for the winter!’”(1)

Governor James Hartness welcomed “women into active participation in representing our people…[as] the most natural representatives of the home.” (5) He hoped Edna would bring a homemaker’s perspective to the legislature. (5)

Edna’s ideas were revolutionary. She sponsored bill H.57, which later became Act 218, granting welfare of $2 per week per child to women who had been “widowed or deserted.”(8,6) Through this bill, she advocated for the children she educated. Elsie said that, “she had them in school, she knew… what the situations were.”(1) After Edna’s father died and she took over caring for her mother, she understood the need for women’s welfare.(1)

Before laws such as Edna’s were passed, widowed women turned to poorhouses because few private charities provided aid, and public poor relief was lacking.(9)

Poorhouses were a grim option. A 1916 study found that they were ridden with diseases such as syphilis and tuberculosis. (10) Punishments at poorhouses were often harsh, and daily work was grueling. (10) 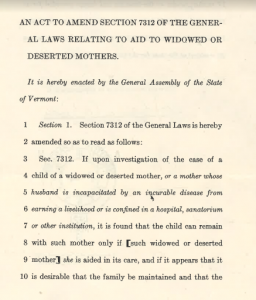 The first page of Act 218, explaining that children may remain with their widowed mothers if they received aid. Courtesy of Vermont State Archives.

Edna was elected to the Vermont Senate in 1923, where she improved job options for women.(1) At the time, female sheriffs struggled to find jobs.(3) S.84, a bill debated in the Senate, would “leave it to the discretion of the commissioner as to whether he would appoint [women] deputies”. (3) Edna objected, introducing a bill that required at least one female deputy to be appointed by the commissioner. 3 She worried that, “should the matter be left entirely to the commissioner, he might not appoint a woman.”(3) She gave women protection in a career where they otherwise would have faced discrimination.

Edna was urged to run for lieutenant governor in 1924, but she left the Senate in 1925, saying that politics had worn her down. (1) Upon her departure, eleven women were in the Vermont legislature. (2) 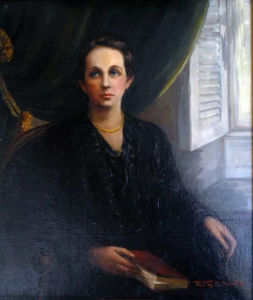 A portrait of Edna hangs in the Vermont Statehouse, painted by Ruth Mould. Image courtesy of Vermont Digger.

After telling Edna’s story, Elsie sat back in her recliner, and a look of contentment crossed her face. She glanced at the portrait of Edna on her wall, and mentioned that a portrait of Edna hangs in the Vermont Statehouse. While most don’t know her name, Edna Beard’s election and legislation laid the groundwork for future female politicians in Vermont.