The Better Side of War

Sergeant Mark Wheeler drove the humvee down the long interstate. Everything was covered in dust and sand, with a few palms trees scattered about. He was only 6 feet above sea level, eighty-three miles from Baghdad, Iraq, in October of 2004. 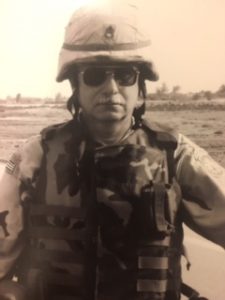 “I was watching the mortars come in, they were bouncing all over the place,” said Wheeler. He was the last driver of three humvees and thirty tractor trailers. One humvee and multiple tractor trailers were blown up, although there were no serious injuries.

“That’s sort of what you dealt with everyday, you never knew if there were roadside bombs,” said Wheeler. “They would come out of nowhere, you’d go around and see nobody then boom, just like that there’s people all over the place.”

Although Wheeler had many combat experiences, his favorite moments while deployed were his interactions with the Iraqi people.

Wheeler’s career in the military lasted for thirty-three years. After retiring in 2012, Wheeler started driving for First Student. He drives one of the routes for Calais.

On any given Sunday, Wheeler can be found surrounded by his family watching Westerns while playing cribbage on his phone. Wheeler takes pride in being a family man, trying to make everyone laugh and feel cared for.

In January of 2004 Wheeler was deployed in support of Operation Iraqi Freedom, “I finally knew I was going to do something constructive besides just doing weekend drills” said Wheeler.

During one of Wheeler’s first nights in Iraq, he remembers being surrounded by an Iraqi family.

“There had to have been 30 of them there” said Wheeler. “And the kids were coming out.”

They were eating dinner on what looked like big throw rugs. Wheeler had to become accustomed to the way Iraqi people sit while having dinner. They either sit on their knees or with their legs crossed in front. In Iraqi culture showing the soles of feet is considered disrespectful. 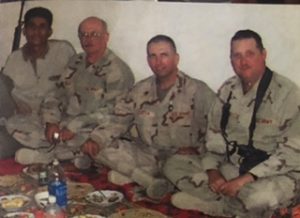 They served food that consisted of chicken, beef, assorted vegetables and flatbread. Wheeler quickly learned that, “Unless you want to eat a lot then you never ever finish it,” he said. “They will give you more and more and expect you to keep eating.”

Wheeler and his troop had to come to learn that once a girl reaches the point where she is able to conceive then she is considered to be ready to be married off. Therefore she is no longer allowed in the presence of any other adult that is outside the family.

Eventually though the girls were allowed to come inside, “It really showed these people trusted us,” said Wheeler. “I really enjoyed that part there.”

“We had a school we adopted,” said Wheeler. “We got a lot of donations from around the world particularly in the US. They would send over all these school supplies.”

Wheeler got to visit different schools around Iraq. He remembers one of the students he met at the school, “She sort of rubbed her face and I knew right then that she wanted some type of face cream”.

The student didn’t speak English but he tried to explain that he didn’t have any face cream at the time but promised to return with some soon, “A couple of weeks later I made sure I had some and got back there. Out of all those kids there, she spotted me and came right up,” he said.

“We got to give them all these different types of gifts which made us feel good” he said later.

But not everything from Wheeler’s deployment was positive. He suffers from hearing loss and PTSD.

He remembers how his dreams have changed prior to deployment and afterwards, “My dreams have always been a little weird but now they’re even more weird,” he said.

“I’ve never dreamt about military action that I’ve been in, but it’s more military related than before.”

Wheeler prefers to remember the good times when speaking about his deployment rather than all of the combat.

Since returning home Wheeler’s perspective on life has changed for the better.

“It gave me a confidence and calmed me down,” he said.

“When people say we’re so lucky to live in this country, I say, ‘you have no idea how lucky you are until you’ve seen that.’” 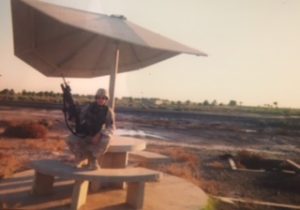