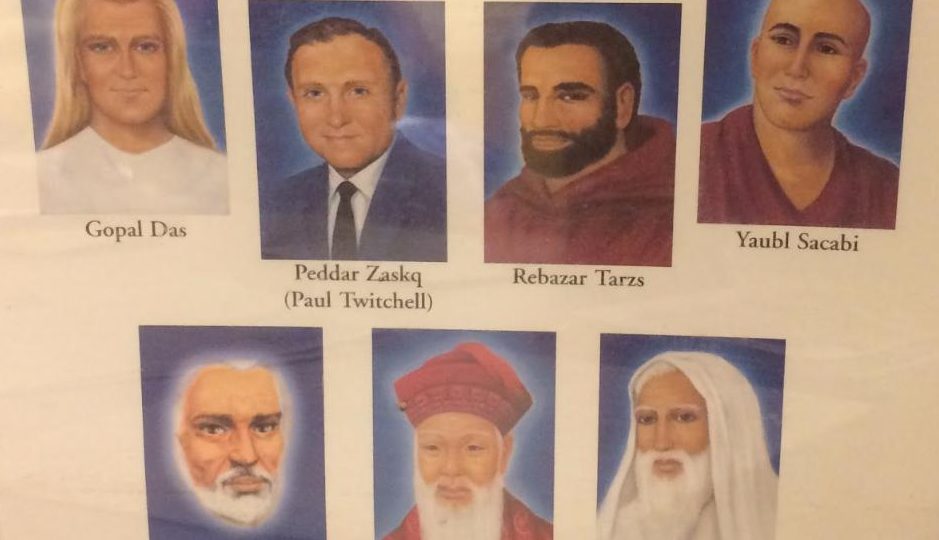 There aren’t a lot of them– only about ten, at first–but over the course of an hour it grows to fifteen in the basement of Hubbard Library.  They introduce themselves, all sitting in a circle together in fold out chairs. A frizzy, blonde-haired woman asks the group to make room for more chairs, as stragglers join in.

They don’t wear robes or clothes with runes. They don’t read from some leather bound book filled with blood red letters. No, these people look like they just walked out of Skinny Pancake or Charlie-O’s.

They do sing, though.

The fifteen believers sing one note, the word ‘Hu’, dragging it out over the course of 20 or so seconds, repeating three times. Their eyes are closed and they sit up straight in their seats. They believe ‘Hu’ is not only the true, most pure name of God, but also the natural sound the universe generates.

Then they talk about Eckankar.

“Learn to go inside yourself because this is the source of all truth.” These are words from Eckankar’s current Spiritual Leader, Harold Klemp. “There are a lot of holy temples out there but the most sacred of all is the temple inside of you.” 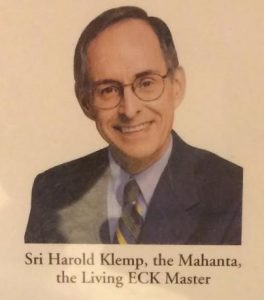 Megan, the frizzy haired women in charge of the seminar, joined Eckankar in the 70’s  in California.  She was studying marine biology and, by her account, she witnessed an electric eel dreaming.

She described how during the day, when they put food in its tank, the eel would charge up a shock to paralyze its prey. With a meter they could keep count the voltage of each shock. At night, the meter was detecting a charge building up, like during the day, but the eel was asleep.

She had a question then: Do eels dream? And the thought and fascination of the idea grew. The idea of other living creatures dreaming brought her to the conclusion of how all dreams mean something, going back to Freud’s original thesis on dreaming. What could this creature be dreaming about?

She finally found what she was looking for in Eckankar.

In the Hubbard basement, Megan grabs a stack of cards now, ones that are blank, and gives out one each to us with a pen. We are told to write down our question or problem in life, and to keep hold of it.

Megan smiles at her audience. “Now holding that space, and the question,” she begins.  “I have a little something, I thought might be fun to try.” She pulls from her purse a separate stack of cue-cards all bound up in a rubber band, about two inches thick, and undoes the band.

Megan described how a friend of her recently had to make the decision to to possibly take another job, but did not know what to do. So he ‘held’ the question within himself, saying mentally ‘should I take this job?’ repeatedly to ask God, or Hu, for advise.

“He was driving along and saw an open field, construction in the middle of the field, and it was basically the foundation of a house, and the only thing that was built for the house a framework of a door,” Megan said. “And the door was wide open.”

She said he interpreted it as a sign that his life is an open door, full of possibilities and it’s not to be spent behind one set of walls.

The story generates enthusiasm in the small group, and Megan explains the cards. Each card has either an image or a quote, things she had cut out from magazines and taped to the cards.

Each person draws three, and it is with these three cards, that the questions will be answered. Questions like “Why am I afraid of water”, “Am I doing the right thing getting married early?” Or: 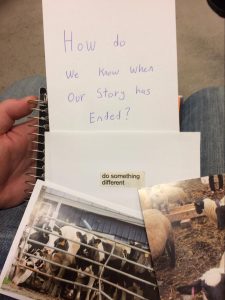 Eckankar is essentially a westernized version of the Indian belief group known as Radha Soami Satsang. Founder Paul Twitchell, a spiritual teacher and pulp fiction writer, used the Indian system after being taught in D.C. and build Eckankar off of it in 1965. 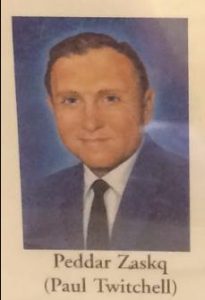 Many have placed Eckankar in the same category as Scientology, seeing as Twitchell was friends with L. Ron Hubbard and even was a part of the church’s staff in the 50’s.  As it turned out, the people who taught Paul about Radha Soami Satsang were not happy with him starting his own religion by using theirs. There were numerous lawsuits about copyright infringement, as most of Twitchell’s books were re-wordings of Radha Soami Satsang texts.

Eckankar combines the Dinetics from the 60’s and 70’s with the already prevalent beliefs of the meaning of Dreams, Spirits, and Soul Travel.

“As Soul, you are like a balloon that rises above the ground. The higher you go, the farther you can see, the better you can plan your life,” Harold Klemp writes in The Golden Heart.

Megan found her answers, and it seemed others there did, too. Two separate participants at the seminar said they were suffering from depression or a midlife crisis. They wanted answers and Eckankar provided them. The group discussed stories of like “I can tell when my granddaughter is dreaming. I can see it in her face and know she’s dreaming.” They take their coats off, now being more comfortable with each other and coming out, telling their respective dilemmas and wanting to get answers for them.

They expense the unexplained and come together, as a community, to sit, talk, and occasionally sing some Eck themed songs. 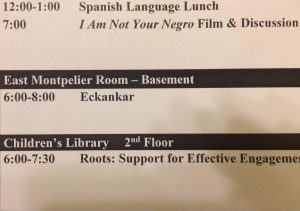