The Davin Code: Hopes and Dreams

When Junior Olivia Bates entered her extended TA for callback in early September to set goals for the coming school year, she felt that she was going to be wasting her time.

“You just bring up all the past things you’ve said,” Olivia says, echoing a common sentiment. 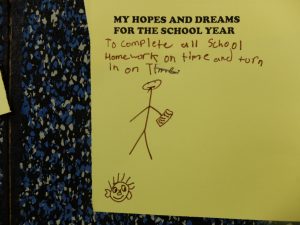 Few things are constants in this world, but the students of U-32 all know that in the beginning of the year, there comes a week of serialized activities which guidance organizes to fill the first callbacks of the year and to try to strengthen the bonds of community.

The cards have come and gone. As the first quarter closes, a wall for anti-drug pledges hangs in their place. Now that the experience is behind us, one might consider what their purpose was, if any.

Common words from the cards included: “college”, “pass”, “3”, “4”, and “A’s”. These manifest in nearly every card, but in the margins of  a few, amateur doodlers left their mark alongside their “dreams”. 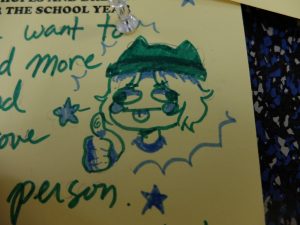 One, among the sea of empty wishes, reads “balance” in text starting small on the left, growing to the center, and shrinking just as small on the left. In the rush for academic achievement, is it possible to maintain creativity, and vice versa?

Another reads “IDK [I Don’t Know]”, is emblazoned with a rainbow, and is cut into the shape of a spinning top. Even one which reads only “Pass” is bathed in vivid color. This begs the question, is the student body  increasingly apathetic? 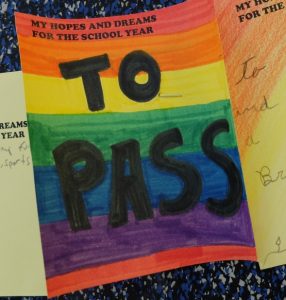 What this wall revealed best about our nature is not what our hopes and dreams are, but who we already are as a community.  Are the students at U-32 are exhausted from attempts to force spiritual growth?  How can they seek genuine self-expression?

Let the doodles in corners serve as an answer, or perhaps a request for a better question. 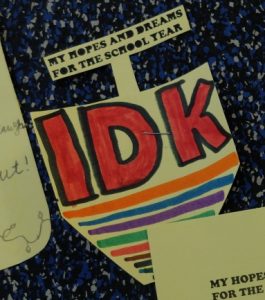