When Jules Perkins was a Freshman, he was given a choice between two math pathways. The first option was four years of traditional high school math; the second was an alternative program called IMP — the Interactive Math Program.

“They were described as being the same, except IMP would be more hands-on, which is how I learn best,” Jules says. “That’s why I chose IMP.”

Three years later, as he prepared for senior year, Jules felt as though he’d made the wrong decision. “I ended up having to have a tutor for SATs and ACTs, and now I’m taking Algebra II,” he says. “I’ve basically had to retake three years of math.” 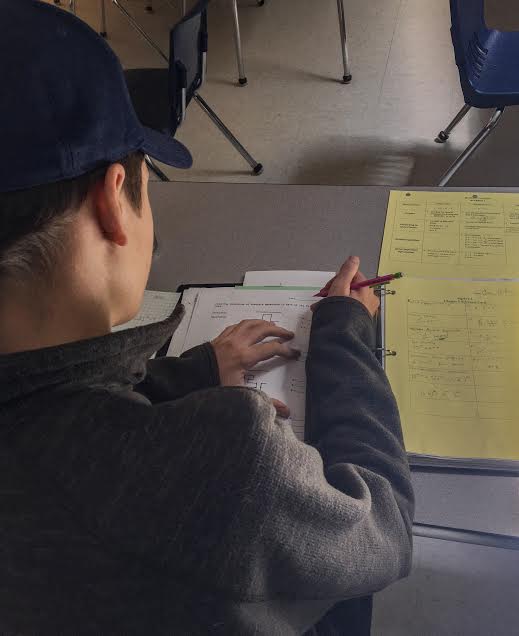 Jules’s experience was not uncommon — other students also felt unprepared by the IMP program. In fact, the program was largely deemed a failure, and discontinued. Still, even after its cancellation, math teachers at U-32 stand by the program, insisting it was a superior option for many students.

Jason Reichert taught the IMP program for several years at U-32, and is a strong proponent.

“The first day of every IMP unit was almost always exploring the unit problem and just grappling with it,” Reichert recalls, “we’d say, ‘ok, clearly we don’t have all the math skills — the tools — that we need to solve the problem’, and then we’d develop those.”

Reichert uses one particular unit problem, titled Orchard Hideout, to illustrate on a basic level how the IMP program worked — and how it covered the same material as Algebra and Geometry classes did.

“Orchard Hideout had to do with the pythagorean theorem,” Reichert remembers, “being able to locate where trees were in the orchard and if a particular tree’s coordinate fell on a line of sight. This had to do with the hypotenuse of a right triangle. For example, there’s a tree at the spot (0, 5). Would that tree fall on the line of sight that goes through (30, 20)?”

“Its a contextual, problem solving approach to learning mathematics,” he says. “In the three years of IMP, students get the same education conceptually that you’d get with algebra I/geometry then algebra II.”

Despite their differences, IMP and the traditional pathway shared the goal of preparing for college level math as well as APs, SATs and ACTs. Many students, though, feel the program did not meet these goals. 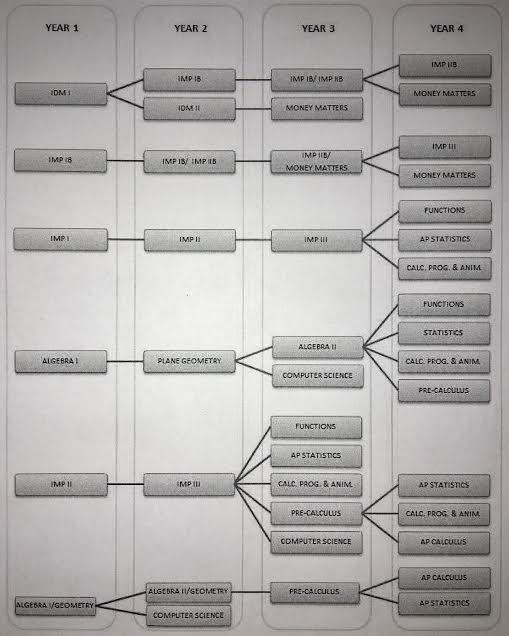 The class paths for traditional math and IMP, which theoretically end in the same place.

One former IMP student, who in sophomore year chose IMP III in place of Plane Geometry, reiterated many of Jules’ complaints: “I constantly felt like I wasn’t really learning anything. The next year I felt I was really not prepared with geometry. Even now, geometry is the weakest part of my math knowledge.”

Both students and teachers at U-32 agreed that one of the more obvious differences related to the time devoted to each concept.

“There’s more breadth in a (traditional) geometry class,” Reichert says. “You don’t get as many skills from IMP as you do in a Geometry class, but you go deeper with it.”

Olivia Peltier, a Senior who took an IMP class, noticed this as well: “we spent very long periods of time on each thing — our units were very long and very specific which for me became boring after a while.”

Reichert acknowledges many of the complaints students had were legitimate. “There were definitely some pretty clear downfalls,” he says. “There wasn’t a lot of opportunity for practice — for solidifying skills students learned… Homework was conceptual, where I really think homework should be a place for practice.”

Reichert said he wasn’t surprised to learn of the students who had chosen to retake entire years of math based on their feeling that the IMP class hadn’t adequately covered the year of math.

“It maybe was a product of IMP not being taught well enough.” Reichert suggests. “It comes down to the fact that everyone’s different — some students will perform better with IMP while others won’t.”

To students who have complained of not being taught particular concepts or skills, Reichert points out that this is inevitable to a certain extent: “IMP doesn’t address every single skill that there is in math, just like Algebra, Geometry and Algebra II don’t… so when you have students coming out of IMP and are taking Stats, Pre Calc — whichever — they feel like it’s a lot different. It is a lot different.”

When U-32’s administration and math department chose to phase the program out, a process which was completed last year, some assumed the decision related to the program’s low popularity.

Reitchert insists this decision was not made because of inadequacies within the program. “It had more to do with the implications it had on sectioning and our workload as teachers,” he says. “Having to prep for four different classes, we became spread too thin — we weren’t planning well for any of those preps, we were just doing the minimum.”

For Jules and many of his classmates, this decision was seen as a positive step for U-32 math. They understand the teacher’s complaints of being spread too thin in preparation, and have their own list of reasons to back the decision. “Geometry — which I learned in IMP — is the weakest part of my math knowledge, which I think could be a problem in the future for me.”

Whether or not the IMP program was truly a failure, as many students would claim, is impossible to determine. Still, most agree — whether it was for flaws in practical implementation or for failure to convey essential math concepts — U-32 is better off without the program.