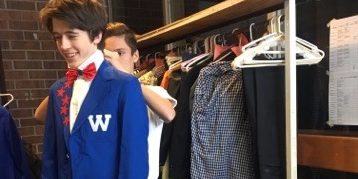 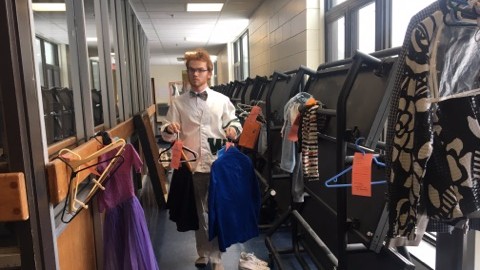 Actor Arthur Anderson prepares for his next costume change.

The pit in front of the stage is brightly lit.  The room falls silent as Erin Galligan-Baldwin and Amy Papineau, the director and head costumer, center themselves in the light.

They immediately begin the process with a slew of commands.

“Don’t be a costume bitch – you get what you get.”

“Put your costumes back where you got them neatly!” 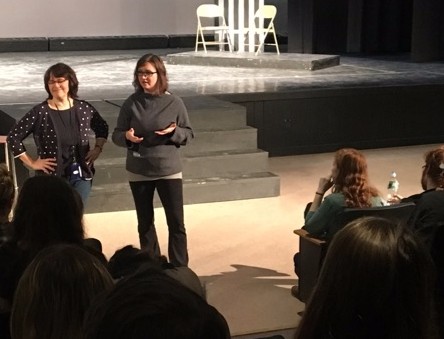 Amy Papineau and Erin Galligan-Baldwin go over expectations for the Costume Parade.

The actors’ scramble to get into their first costume begins with a loud “go!” from Galligan-Baldwin.

The Costume Parade is the showcase for  all the hard work the costume crew has put into setting the stage. The actors have already tried on their costumes, but this is where they learn about final touches, embellishments, and other changes.

It is also where the director either approves or vetoes the product.

“It’s a stressful process,” remarks Anna Van Ness, a costumer. “Sometimes, we have to completely start over on a costume.”

During this costume parade, one costume for the character of Lenora, played by Libby Belitsos, was completely redone during the 2 hour process – the neon blue petticoat was replaced by a tight pink skirt and the shirt was restyled. 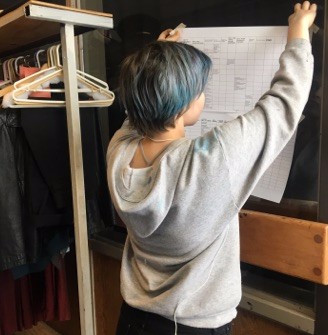 Frances Kaplan hangs a spreadsheet of costume changes for all actors.

“We’re mostly there to help and take notes on what Erin does and doesn’t like,” said Frances Kaplan, another costumer. “We get a lot of questions like ‘where’s my shirt’ and ‘how do I wear this’, and we have to help them however we can.”

Crybaby takes place in the 1950s in Baltimore. It is recently off Broadway – so recent that U-32 bought the rights to perform it 2 days after they were released. Stage 32 will be the second high school ever to perform it.

The show features a gang of clean boys called the Whiffles, who can be compared to the Nicest Kids from the popular 60s musical Hairspray by the same creator, John Waters. The Whiffles are played by Adam Blatchly, Riley Flynn, Arthur Anderson, and Justin Murray.

Throughout the show, the Whiffles wear bowties. “They’re reversible, so we only had to make 4, but they also have the regular ones for the 4th of July,” said Madison Roberge, another costumer. 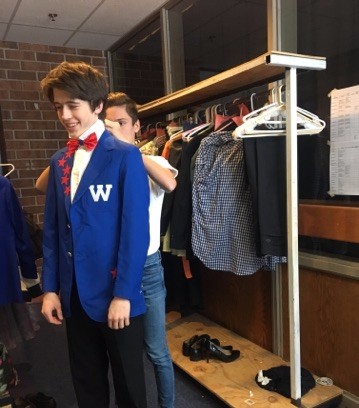 Crybaby will be performed in just a few days.  For now, at the end of a long night, the Costume Parade ends,  costumes stuffed onto the same hanger, hats in random places, petticoats on top of the racks.

Opening night for Crybaby is April 7 at 7:00 pm, this coming Friday. There will also be an in-school performance this Friday free to any high school classes that are attending and anyone with a Band 2 free, starting at 9:30. There will also be performances Saturday (April 8) at 2:00 and 7:00 and Sunday (April 9) at 2:00. Tickets are $12 for adults and $10 for students and seniors in advance and at the door.