Is U-32’s Budget in Line with our Priorities? 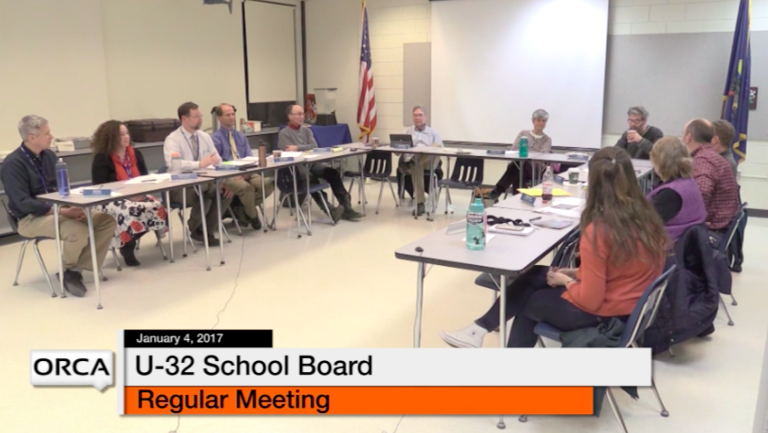 On the evening of Wednesday, January 4, the U-32 School Board sat down for their first meeting of 2017. Two and a half hours were focused on the budget proposal for the 2017-2018 school year, which is proving controversial due to cuts to teaching staff. Despite discussion over the budget, draft #4 passed with a 6-1 vote by the School Board.

Principal Steven Dellinger-Pate explained why the cuts were necessary. “The budget put forward was still a 2.99% increase from last years… we had to decrease it by a little over $300,000.” To restrain this increase below 3%, as requested by the Board, “there were cuts to three teaching positions, and we are also reallocating some administrative positions, so there’s reimbursements from the state for supervising special education.”

Class sizes were a significant factor in deciding where the budget had flexibility. “Small classes,   which we generally consider those fewer than 10 students, and average class size, which probably needs to be around 18 to 22 kids for it to be monetarily and budgetarily strong,” said Dellinger-Pate.

In the end, the school cut three teaching positions: one in art, one in design and tech, and one in science. 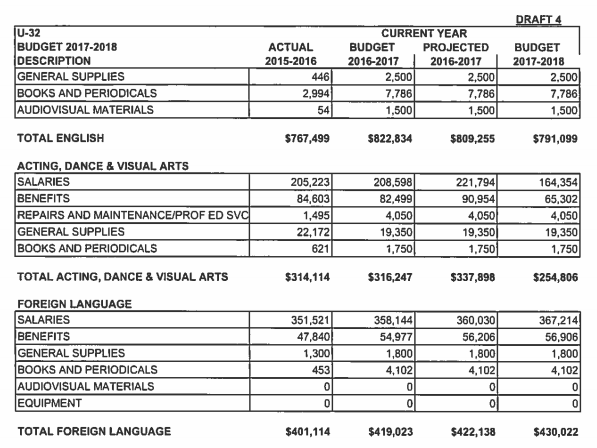 Laure Angel, a social studies teacher in the middle school, was surprised by the low turnout from teachers and the community, especially since substantial cuts were proposed.

“I’d like to find out if it’s just an overwhelming sense of trust and approval, which it might be, versus a little bit of apathy,” she said. “If it is apathy, I’d like to figure out what we need so that people can participate more.”

While the attendance of the meeting was low, the discussion pointed to a troubling question: does the new budget support the change to proficiencies?

Angel expressed concerns over position cuts due to the commonly held belief that proficiencies will ultimately require more staff.

“It doesn’t take less hands on deck. If we’re going to have a school where a lot more advising is done, that’s a different kind of work than direct instruction to a classroom. It takes a lot of time,” explained Angel.

“I don’t want to see this system where we have this dichotomy of saying ‘oh, this is what we want to do’ and fund the opposite,” she said. “I believe in our community, I believe that they support having really educated kids, but also, I don’t blame them. We’re still confused about proficiencies.”

But the stark fiscal realities the school faces may cut against the five year vision.

Dellinger-Pate explains that “the budget has two major things that can occur. The number of students in the school goes down, and so that reduces the amount of revenue we get from the state. This, combined with increased costs in general.”

From 2006-2016, the number of students enrolled at U-32 has decreased by 104. At the same time, we will see significant increases in the costs of transportation, special education, and salaries.

Dellinger-Pate says that, when difficult cuts are made., “when these two things happen, lower revenue and higher cost, then we do have to make sure that we balance our programs in a way that we still serve everybody.”

Jonathan Goddard, a U-32 Board Member from Berlin, disagreed, saying that some students would not be served fully under the proposed cuts. Goddard, whose children thrived in the arts at U-32, said, “Knowing the value of the teachers we’re talking about, I think there’s room in the budget to get to the same number without cutting positions.”

Dellinger-Pate claimed that, contrary to Angel and Goddard’s concerns, “We should still be able to provide all the same courses in art and science without any issues. For design and tech, we are going to have to rework some of our courses, but we should be able to provide students with those same opportunities.”

For other future budgets, Dellinger-Pate said that his “goal is to continue not to cut courses and programs, but certainly making sure we have the right number of teachers and staff to make this building work and work for all kids.”