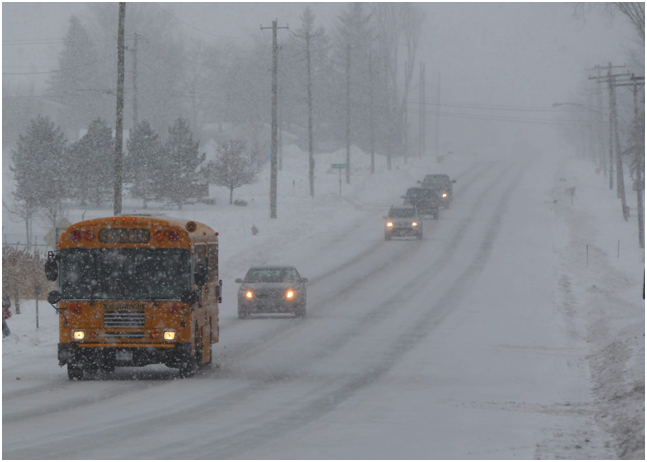 Principal Dellinger-Pate has made yet another divisive addition to his burgeoning administration, appointing a fellow Texan, twenty-six year old Kelsea Winston, as U-32’s next Snow Day Commissioner.

Winston, also part-owner of a big game ranch near Dallas, has come under fire in just her first month of service, after opting not to cancel school or even call a delay on several icy mornings.

In a press conference last week, Dellinger-Pate defended Winston against charges that she is unqualified for her new position.

“Let’s be real here,” he said.  “Kelsea has collected, raised, and sold the hunting rights for a number of tropical and subtropical animals, including endangered species from Africa…. I think she has the know-how and experience to make a relatively simple choice about whether to close school.”

But some in the learning community aren’t convinced, and are pushing for a school board hearing, citing troubling revelations in recent media reports. 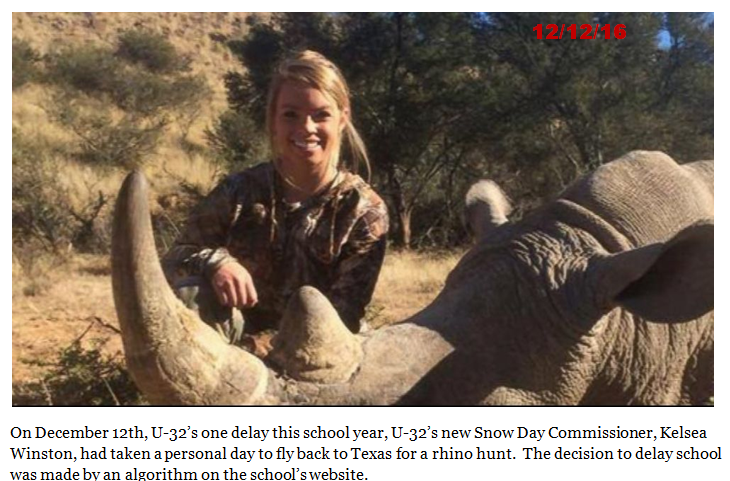 A Woolly Mammoth investigation found that Winston has made public statements condemning school closings for any reason — saying in one instance that “when you stay home, you let nature win” — and discovered online connections between Winston and the extreme weather group “Hell or High Water,” which has drawn criticism for keeping its own private schools open even during flash floods and tornadoes.

Laure Angel, a social studies teacher in the middle school, voiced a common concern in the learning community. “There doesn’t seem to be any rhyme or reason, or political agenda behind it,” she said. “He’s just bringing in his friends from home, to feed at the trough of taxpayer money.”

On last Sunday’s morning talk shows, a spokesperson for the administration suggested Angel’s criticisms likely stem from her own ambition to become principal.

The debate over the administration’s growing “leadership team” has been intensifying all year, and Winston’s appointment is only the latest of a string of unconventional choices for key posts. 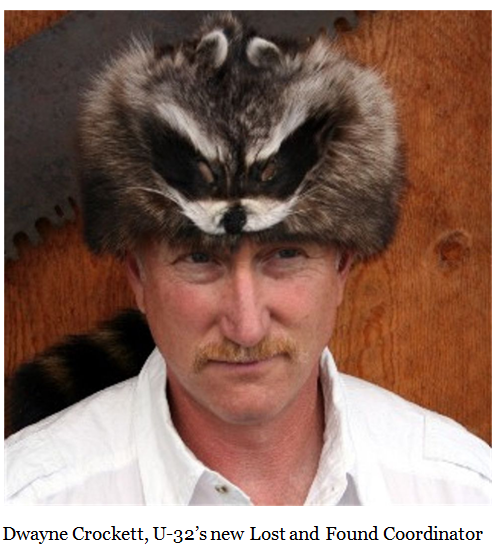 Earlier this month the school board confirmed Dwayne Crockett, great-great-great-great grandson of the legendary Davy Crockett, as U-32’s new Lost and Found Coordinator.  Crockett had been working at the Alamo, the historic fort in San Antonio where his famous ancestor died in battle in 1836, before coming to U-32.

Critics have raised few objections about Crockett’s qualifications (the Alamo’s lost and found handles tens of thousands of items annually) but question his compensation, which includes full benefits, a six-figure salary, and generous stock options and performance bonuses.

Dellinger-Pate is standing by his selection, most recently in a late-night-tweet: “Dwayne is a good friend of mine, and a true American patriot,” he twote. “In a year’s time, when you still have your water bottle, or your sweatshirt, you’ll understand what we’re paying for here.”