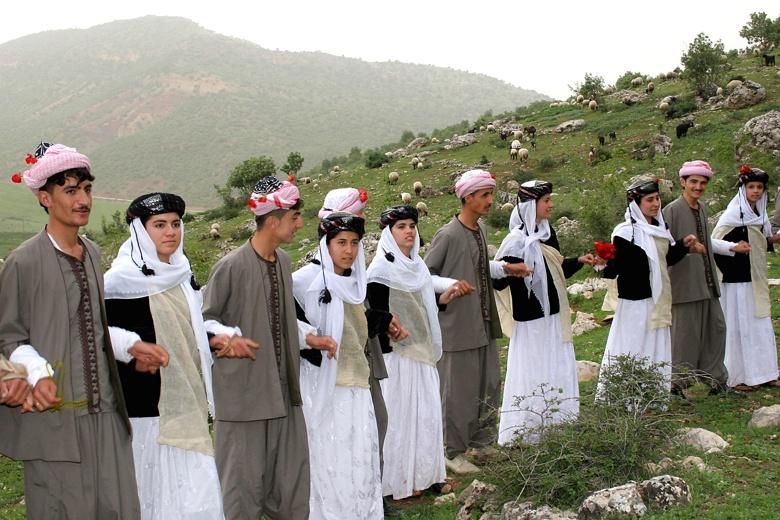 1 in every 6 women in America have experienced rape or sexual violence. This is a violation of human rights falling under Article 5 in the Universal Declaration stating “No one shall be subjected to torture or to cruel, inhuman or degrading treatment or punishment,” according to the United Nations website.

Anyone who has taken Comp & Lit class in the 9th grade has read the book Speak, telling the story of Melinda Sordino in Merryweather High School of Syracuse, New York. During the summer Melinda went to a party with her friend. At the party there were upperclassmen and alcohol. Andy Evans, a drunk senior, gets close with her and takes her out to the back of the house and rapes her. Confused and scared, Melinda calls 911 which breaks up the party. Her friends find out and don’t speak to her, not knowing she had been raped. Melinda has gone through what a lot of women, men, and children have gone through, sexual assault. Melinda has experienced a violation of her human rights as have many Yazidi girls in Syria and Iraq, specifically ISIS territory.

Yazidis: Located in parts of the Middle East, Yazidism incorporates themes from Judaism, Christianity, and Islam.

In 2014 ISIS was taking over parts of Syria and Iraq. Laish, the place where most of the Yazidi population resides, was one of the last places ISIS invaded in northern Iraq. The violent takeovers of ISIS had been broadcasted for a few weeks prior and some of the Yazidi people left. Some, however, did not get away in time and were stopped by ISIS soldiers on the way to the Yazidi village of Kocho. Those people were either captured or killed.

On August 3 of that yea 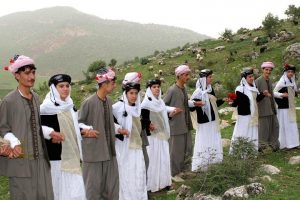 r, ISIS soldiers drove into the center of Kocho and asked the villagers if they would renounce their faith and convert to Islam. The Yazidi people said no; their life was built around this faith. In the meantime the soldiers came and collected weapons from the villagers, threatening that ISIS fighters would have to kill them if they didn’t turn them over. After three days white cars with machine guns and black ISIS flags rolled into the village demanding that all residents of the village bring their valuables to the school. Once all of the residents got to the school the men were separated from the women: the women were brought to the second floor while the men stayed on the bottom floor.

Out in the schoolyard, buses came and picked up all boys ages four and up. They were sent to brainwashing and terrorist training camps in Syria. The men piled into a different van and were taken about a kilometer away. Back at the school the women and children could hear the massacre of the Yazidi men one by one. Women were screaming, babies were crying, girls were banging at the windows trying to get out because they thought the same thing would happen to them. Eventually another bus came and the women and children were separated by age. Small girls between five and eight, young women ages nine and up (if not married), married women, and elderly women. The babies or children under three were allowed to stay with their mothers, and the elderly women too old to be slaves were killed.

When the different age groups were loaded onto each bus they were taken to different locations. The 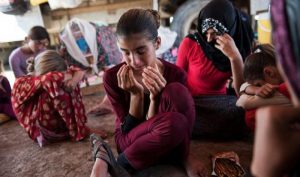 unmarried girls above nine were taken to a slave trading headquarters in Raqqa, a region of Syria eighteen hours away. During the bus ride girls were weeping, some frozen from shock, some banging at the windows trying to escape. Every time they would get out of hand a militant would beat them and tell them to shut up.

When they got to their destination the girls were crammed into a building. Militants from all over ISIS territory came to buy girls. Since girls were bought and sold like objects, they were treated like them too. Women and girls as young as nine were constantly raped and beaten, sometimes a girl will be in a room with dozens of ISIS militants. If a girl tried to run away and was caught she was brutally beaten and severely raped. Sometimes younger girls would die from internal bleeding because they tried to run. The effects of this constant rape and being treated like animals caused many girls to commit suicide because they had no hope.

It is really hard to escape this sex slave trade because if they tried to take refuge in somebody’s house you could be turned in because the house owners didn’t want to be killed by ISIS. Or, they could help you but ask for a gigantic fee from you or your family. Remember, this is happening now. According to a New York Times article, October 10, 2016, a total of 5,000 women and children were abducted in 2014 there are still 3,000 women and children in this horrific business.

Why did this Happen? 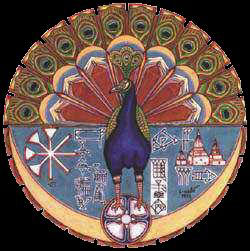 that is where a misunderstanding takes place. The story of Melek Taus is similar to the story of Iblis (the devil) in Islam. When Allah (God) created Adam (the first human) he asked all of his angels to bow to him, and Iblis refused. Allah then banished him from paradise due to his arrogance and disrespect. After this Iblis vowed he would lead all men and women a stray to prove his superiority. Now, the Yazidi believe that when God asked all of his angels to kneel before the man he had created, it was a test to see if his angels were loyal. When Melek Taus did not kneel he was the only angel with love for God and God only, Melek Taus never had evil or wickedness is his body. Yazidi people do not dare utter “satan” or “devil” because it is offensive to their religion. Because

of this similarity, ISIS thinks that the Yazidi people are Satan worshipers. In the book “The Girl Who Escaped ISIS” an autobiography by Farida Khalaf,  she is on a schoolbus going to a slave market in Raqqa, and the ISIS soldiers on the bus say this:

“‘It was our right to kill them because they were infidels.  For that is what it says in the Quran: ‘Kill the infidels!’ ‘And take their wives’ another added. ‘That’s why you belong to us now, and we can do whatever we like with you. You don’t have any rights’” (Khalaf 66).

When it came to Christians and Shi’ites, they let them take their belongings and go because the religions were similar. They didn’t feel that Christianity contaminated Islam, and Shi’ites practiced the same branch of Islam but not as extreme. Because ISIS extremists believe in strict interpretation of Islam (violent and extreme Wahhabism) they view the Yazidi people as infidels. Due to the Yazidi religions similarities to devil worship, extremists felt it was their right to exploit the women and kill the men; the Yazidi people were viewed as animals with no rights.

Nadia Murad was one of these girls who managed to escape, but she had to pay a large ransom to the family who helped her, which is often the case. She started out in Kocho with her family: a mother, father, and six brothers. On the day that this happened she was separated from her father and brothers in the school. To this day, she doesn’t know if they had been killed or captured. Nadia was taken to an ISIS stronghold in Mosul where she and the other Yazidi girls stayed for several days. She was traded and bought for several months. She tried to escape twice; the first time she was caught and taken back where she was brutally beaten and raped by many ISIS militants. The second time she was taken in by a family nearby who protected and hid her from ISIS militants. Following that she was sent to a refugee camp and later sent to Germany. Since then, she has become a Human rights activist standing up for the rights of Yazidi women and 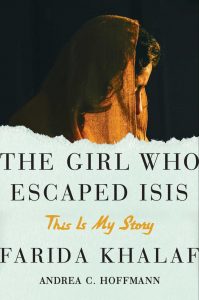 children who are victims of genocide and war crimes. As of the 13th of October she has won the Vaclav Havel Human Rights Prize for her speaking against this violence.

“Farida Khalaf” the name this author uses to cover her identity to protect herself against ISIS, wrote The Girl Who Escaped ISIS, an autobiography of her life and months in the slave trade. Farida was traded like livestock, she went through extreme abuse and was raped multiple times. Farida tried to commit suicide on multiple occasions. When she finally escaped she was taken to Germany to stay with the uncle of her friend, where she learned German and wrote a book on her trauma.

By speaking up, Nadia, Farida, and Melinda have addressed the first step in getting over trauma. The women in the sex slave trade have experienced verbal, mental, physical and sexual abuse unimaginably worse than what happened to Melinda.

According to RAINN (Rape, Abuse & Incest National Network), the largest anti-sexual violence organization in the United States, after being raped:

In Speak, around the time Melinda told Mr. Freedman about her trauma, signs started appearing showing that things were getting better. An example was the tree, in the beginning of the year you could see how the painting of her tree was dead and the page almost looked black showing us she was still experiencing PTSD, but towards the end of the year her trees became more alive and colorful showing us she had stopped blaming herself and broke down that wall keeping her from happiness.

In an interview on Sofie and Co. when Nadia was asked,

“I know that you’ve been nominated for the Nobel Prize. What does this mean to you after everything you’ve been through?” 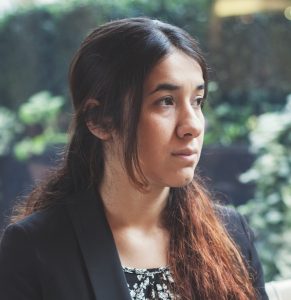 “Yes, I’ve been nominated for the Nobel prize. But this prize should stand for all of my people, for all the minorities and ethnic groups, for each woman and child suffering from torture and abuse. Only then this prize can be a good, sacred prize respected by the whole world. But I’ve got something bigger than that. I have a greater task. My people are suffering genocide. I need to stop the genocide against Yazidis that is still going on. ”

Nadia has chosen to follow the path to free the Yazidi people from this catastrophe, by speaking out and standing up for herself, her people and other minorities she taken steps to move forward from all that she has been through, and thus closer to overcoming her trauma.

While I was writing this I got asked why I was researching something so depressing, and that really got me thinking. What would happen if I didn’t pay attention to this? The way I see it is that if everyone lets it go, if everybody just pretends that it isn’t happening to save their peace of mind, nothing will ever get done. If I were to turn the other cheek that doesn’t change the fact that this is still going on. So I would rather risk my peace of mind just to know that I tried to inform people, just to know that I can get one other person to be aware of the world and what is going on in it.