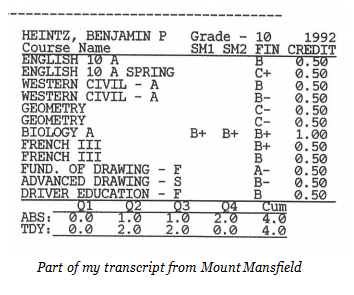 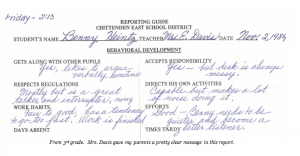 One night last Spring, after my parents had come over for dinner, we discovered a large, heavy-duty cardboard box in our mudroom.  My mom, seeking to clear out some space in her own house, had stealthily dumped it at ours.

The box turned out to be full of my old birthday cards, school assignments, certificates, artwork and report cards.  It was layered, like an archaeological dig: papers from college on top, then down through the grades, with construction paper and scribbles from pre school on the bottom.  I looked at a couple embarrassing essays and poems from college, then put the box away.

I thought of the box again during inservice at the start of this school year, when I kept hearing versions of the same remark from different people, describing Vermont’s switch to proficiency-based assessment:

“We’re changing the way things have been done in schools for 130 years.”

I understand why people say this, to remind us how hard it is to let go of deeply held assumptions and habits of thinking.  And it’s true that, with our shift to proficiencies,we are challenging some basic, old-fashioned ideas about learning and assessment– and hopefully replacing them with something more meaningful.

But to say we’ve been doing things the same way for 130 years also ignores a simple fact: our times are defined by rapid, accelerating change.  It’s important to acknowledge that, in public education as in everything else in the United States, we’ve actually never done things quite the same way for more than a generation.

I’m forty years old this year. Like a lot of other teachers in our district, I have been either a student or an educator in Vermont almost all my life. In my view, a student’s experience in 1976 (read this classic article) was worlds away from the public school experience of their parents, and just as far removed from the student experience of 2016.

I wanted to test this idea against some real evidence, so I went back and looked at the school assignments, report cards and transcripts in the box my mom dumped at my house, reflecting on the question of assessment and how it’s been handled in my lifetime in Vermont’s schools.

Of course, my experiences may not represent those of many other Vermont students, and Vermont is different from most places in our country.

Nevertheless, I’d like to share a few artifacts and thoughts from my own life of assessment in Vermont schools, to make two simple points: 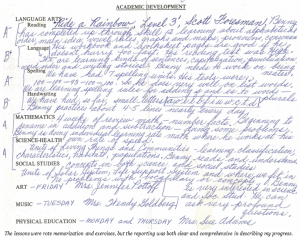 The elders in my hometown, West Bolton, attended a one-room schoolhouse until the late 60’s. The ages were mixed, with kids going at their own pace, building essential skills– in some respects, it sounds like our vision for a proficiency-based U-32.

My generation rode buses to bigger, but still pretty small schools like Jericho Center Elementary School, an old white two-story building where the teaching was probably a lot like the one-room school house, only separated into classes by grade.

We worked from primers, or workbooks, as the basic means of instruction, moving from level to level working alone at our desks. We would chant out the times tables, say our Pledge of Allegiance, and occasionally compete in spelling bees or other kinds of trivia games from what we had been reading. This kind of teaching and learning was heavy on repetition and memory and light on critical thinking. We learned our times tables, absolutely, but there wasn’t a lot of interesting discussion.

Ms. Davis, my teacher, reported to my parents that I was “noisy” and needed to “become a better listener” but she was also able, in her own hand-written sentences on the “Reporting Guide,” to describe exactly where I was in my progress in spelling or in math. She even noted that I asked “profound questions” sometimes (at least back then). There aren’t many numbers on this report card, compared with the columns of digits we see now, but my parents learned a good deal about what I was up to at school. 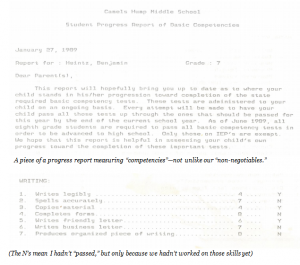 First, it’s worth noting this was printed out from a computer.  In 1989 computers were just beginning to make an impact; today they’re central to almost everything we do at school, including assessment. Compare Infinite Campus to my third grade report card.

I don’t remember taking tests where I had to “write a friendly letter,” but it appears that Vermont, by the late ‘80’s, was moving toward language, and a form of reporting, that focused on attainment of discrete skills.  1989’s “basic competencies” sound sort of like “transferable skills,” “non-negotiables,” or, most closely,“performance indicators.” 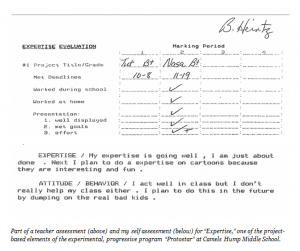 Some Vermont schools were probably as far left as any in the country back in the 70’s and 80’s (talk to a U-32 graduate). In middle school I was part of one progressive experiment, participating in two new programs for kids who, for whatever reason, “needed something different” from the normal classroom.

The program in 6th grade was called “Protostar”; in 7th and 8th grade it was called “Blaze.”  In these classrooms, we had a lot of say in our learning, through self-directed projects like the one assessed above and through democratic decision-making as a class. I applied because I correctly surmised there would be less work.

We had well-meaning, idealistic teachers and some of the hands-on projects were engaging and meaningful.  We’d spend whole days at the Winooski River studying aquatic life, or days on end building chutes and ramps for marbles, studying physics.

But the chaos of those classrooms, and the lack of real academic work, was incredible. By the time I got to high school I had learned a lot about how to sound thoughtful when I “reflected on my learning,” but my academic skills, behavior and study habits had actually deteriorated.

The purpose of assessment, in those programs, was deeply personal.   Reflecting, working toward self-actualization, was the means of measuring learning.  In the “Protostar” program, we actually had rubric-like assessments (see above) that measured transferable skills, if not by that name. Checking off the “met deadlines” column is a way of measuring what we’re now calling “initiative.”

But there wasn’t much formal assessment of any kind. One of the only artifacts my mom kept from my two years in “Blaze” is an index card, hand-written by my teacher for my parents to read, noting that I was “aware of injustice in the world” and “struggled to reconcile it with my own experience.”  I did learn a lot about empathy in “Blaze,” but I think her analysis was a bit of a stretch.  And, as my comments above reveal, I ended up being a little cynical about the process of endless reflection.

A piece of a transcript and a graded paper from Mount Mansfield High School. 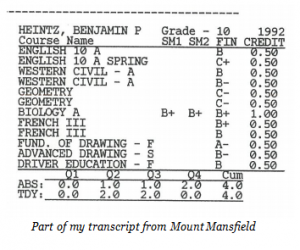 From a distance, high school assessment in the 1990’s was a lot like now.  The transcript above is similar to what we’d see today, and the “Carnegie Unit” system, which we are moving toward abandoning, awarded credit then as it still does today in most high schools.

But the learning at the school — the experience behind the transcript — has evolved in some important ways since then. In my view, our schools today offer more choices, engage more students in critical thinking, make content more relevant and current, and assess students with far more specificity than they did twenty years ago.

One basic reason is the internet. Look at the comment and grade on the last page of the essay below.  There may have been more than one draft, and other feedback at some point, but there were no google docs connecting students and teachers in an ongoing dialogue about their work, as there are now. Look at the works cited. We had access to some current resources — magazines, etc. — but they were pretty limited. Today the resources are endless, for better and for worse. And teachers don’t have to reuse the same readings, slides and books.  I think the students of 2016 (again, as a whole) are much better informed about the world around them, and school is much more interesting now, because teachers and students have access to the information and creative possibilities of the web. 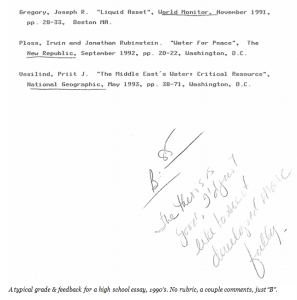 Another crucial difference: the teachers (as a whole) are more effective now. There were amazing teachers and poor teachers in the 1990’s, as in any time. But today’s teachers are trained to engage their classes in critical thinking, to use formative assessments to be responsive to their students, etc.

I also think teaching, as a profession, has become more attractive relative to other options as our economy has shifted and solid middle-class work has become more scarce. Teaching is a pretty good gig, relatively speaking, and we have a lot of talented, highly educated young teachers who may have been lured toward more lucrative options in another time and another economy.  I had several teachers in high school who just wouldn’t have cut it at today’s U-32.

In many respects, our students today are held to a higher standard in their work, with more specific expectations, than a generation ago. Our current assessment tools — like rubrics — are just the bureaucracy of a substantially new, more focused approach to the measurement of learning. Kids have more interesting, challenging assignments and are more aware of their own progress.

Of course our high schools still don’t succeed in engaging every student, or in preparing everyone for a successful next step in life. Even our best students are still bored sometimes. There is plenty of room for improvement, and PLP’s and a focus on proficiencies could help us take the next step.  But in my experience of public school in Vermont, we’ve come a long way.

I recently heard the “130 years” phrase again in a surprising context. When Apple revealed that the new iPhone 7 has no headphone jack, the company celebrated its own “courage” in making the leap away from a technology that, as was remarked around the web, has been with us for 130 years.

It’s true, the headphone jack was invented in 1878.  But it was made for the first telephone operators to change connections on their switchboards. We do still use the same basic technology, but today — watching Netflix on smartphones, for example — the purposes of headphones have expanded and evolved. It’s the same thing when we drive by the local high school. The technology may look the same from a distance. But in the experience of its users, it’s really not the same at all.