Where We’re Coming From: “Firearms Enthusiasts” 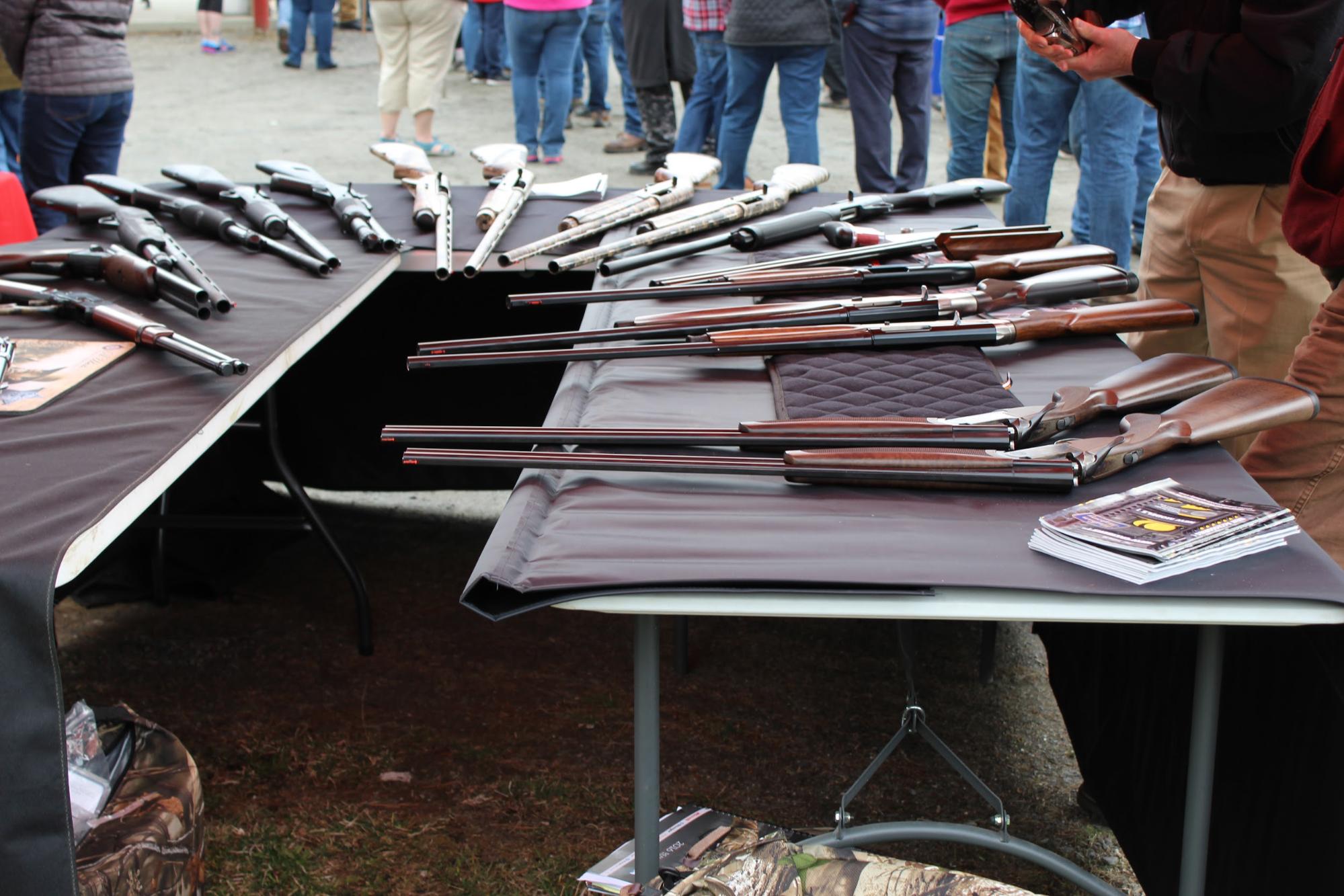 They stood in line by twos and threes, most wearing earplugs, hands in their pockets on a chilly April morning.  They carried tickets marked with numbers– .223, .45, .380 — and out ahead of the line, in front of a covered portico, shooters fired rounds across an open field into chest-high rows of mounded earth.

Some stood, firing pistols; others sat and squeezed off rounds from assault rifles mounted atop tripods. Some of the shots sounded with an cracking echo, some were muted by suppressors– silencers– legal in Vermont since last year.

These Vermonters are “firearms enthusiasts.”  They were at Barre’s Fish and Game Club firing range for the eighth annual “Range Day.” put on by R&L Archery, one of the area’s largest gun sellers.

Representatives from several manufacturers– Ruger, Benelli, Savage, Sig Sauer– chatted with potential customers about their products at display tables, and for a three dollar ticket one could have the ammunition and opportunity to fire any one of hundreds of firearms on hand, from hunting rifles to pistols and assault weapons. A steady stream of ticket holders, many cycling through to try several models, held up through the day. 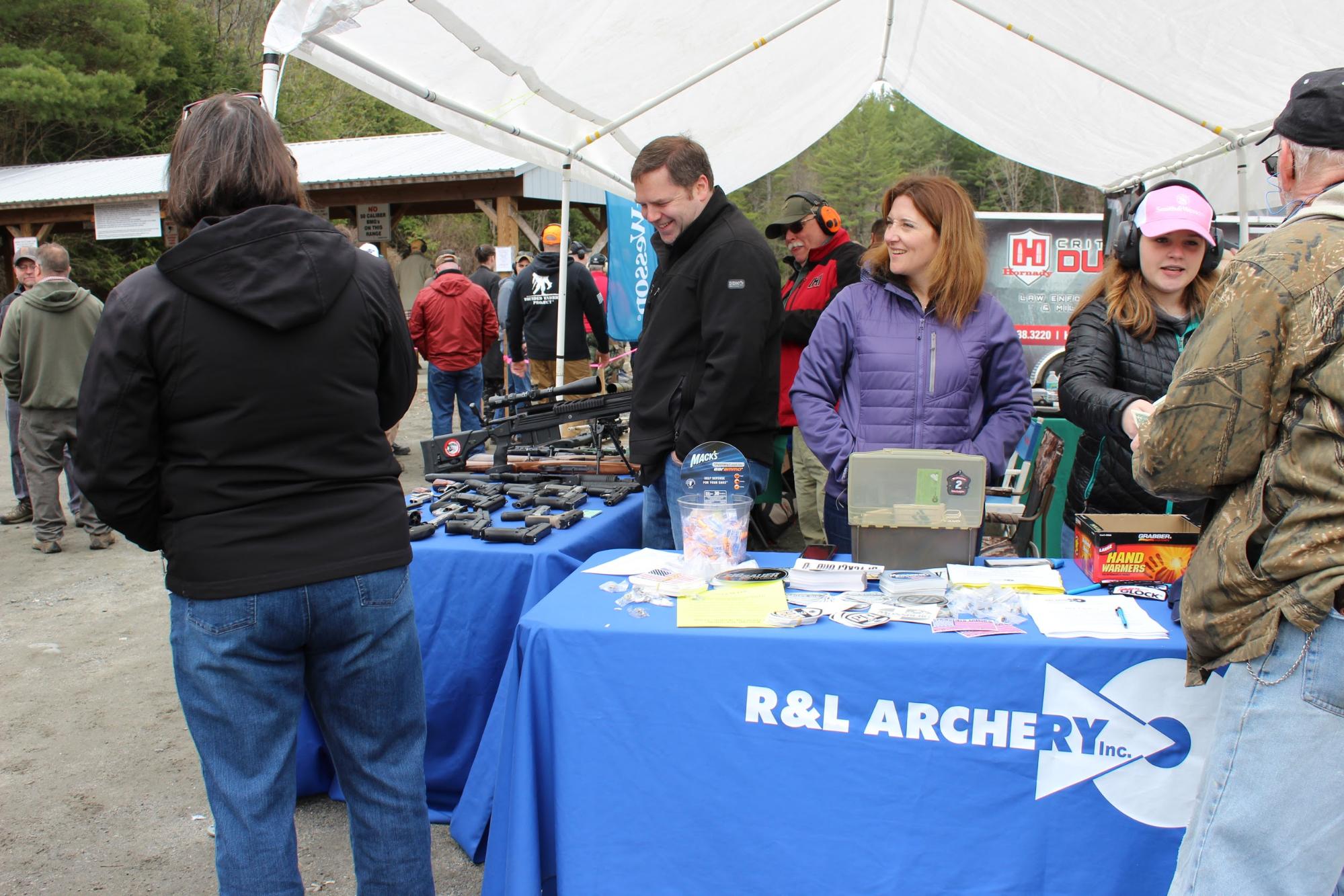 Shannon Sanborn, of R&L Archery, spent most of Range Day selling tickets.  She said most people were there simply to try different guns for fun, with no intention to make a purchase, and that there is no “typical” firearms enthusiast.

“There’s a broad gun ownership,” she said. “Some of the people want a gun to have on their bedside table, for protection, and then we have people coming in that are hunters, or sportsmen,” adding that she has only one gun herself, acquired just this year.   She said firearms enthusiasts are misunderstood by many Vermonters.

“You mean because we’re all beer-drinking rednecks?”   Shannon’s husband, Jon Sanborn, also of R&L Archery, joined in with a laugh.

He said liberals often know little about firearms, misunderstand gun owners, and are inconsistent in their   views.    “Hunting rifles? Fine, you can hunt.  The personal protection gun? Ok, yeah, that makes sense.  But that one, an ‘assault rifle’? That’s scary, no one should have one.”

He emphasized that even the guns with the most military appearance, with all the trappings of a machine gun, are semi-automatic and fire a single shot at a time.

“They don’t actually perform differently, it’s just an aesthetic difference.”  Firearms enthusiasts are a lot like “gearheads” in any other sport, he said.

Sanborn said that, as a gun owner, many gun control laws, like New York’s proposed assault rifle ban, “…make no sense whatsoever” because “some of the things they go after don’t actually affect the performance of the gun.”

Gun violence can best be prevented by addressing “underlying issues,” particularly with regard to Mental health, Sanborn said, where more preventative measures could help keep guns out of the wrong hands.

He said that because of all the HIPAA Laws (federal regulations protecting the privacy of the mentally ill), “….you can have someone who’s having mental issues but that never gets reported up to the A.T.F. [the bureau of alcohol, tobacco and firearms], so if they go to buy a firearm legally, the A.T.F. does not have access to the information that this person is not a good person to have a firearm.”

Laws addressing these kinds of gaps in reporting have been proposed in several states in recent years, Sanborn said.  “There are a few gun laws now and again where I agree.” 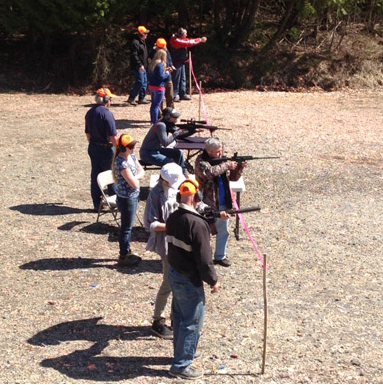 Away from the ticket tent, wearing an army jacket and orange ear protectors, Ian Galbraith was looking over the guns at one of the display tables. He described himself as a gun collector and hobbyist.  As a boy, he said, he was “…scared by the noise but fascinated by the mechanisms.   I’ve always viewed guns as sort of the ultimate gadget. Other guys might get into cars or something, but I’m into firearms.”

Galbraith had come to Barre from his home in Burlington, where they had recently had “some dustup over guns,” including ballot items to prohibit firearms in bars and to empower police to take weapons for even suspected domestic abusers. He said the regulations were driven by fear and misunderstanding.

“A lot of people are afraid of guns.  If you live in the city, the only people that have guns are cops or robbers– they don’t have the opportunity to use guns for hunting or casual target practice.”

Galbraith said Vermont’s “Sportsmen’s Bill of Rights,” or preemption law, will prevent Burlington’s gun regulations from becoming law.   The statute, passed by the Vermont state legislature in 1988, prevents municipalities from passing their own gun laws in order to avoid an inconsistent patchwork of laws across the state and confusion for hunters.

Like Sanborn, Galbraith said gun violence can best be prevented by addressing mental health reporting issues, and by stricter enforcement of existing laws. “You don’t have to sentence everybody to life without parole for every violation. But you make being irresponsible with a firearm painful.”

Under a tent nearby, Rich Morovitz, a “Subject Matter Expert” with Sig Sauer, took a break from talking a customer through one of the company’s “complete systems” to discuss the gun debate in America.

Morovitz said the controversy stems from fundamental differences in values. 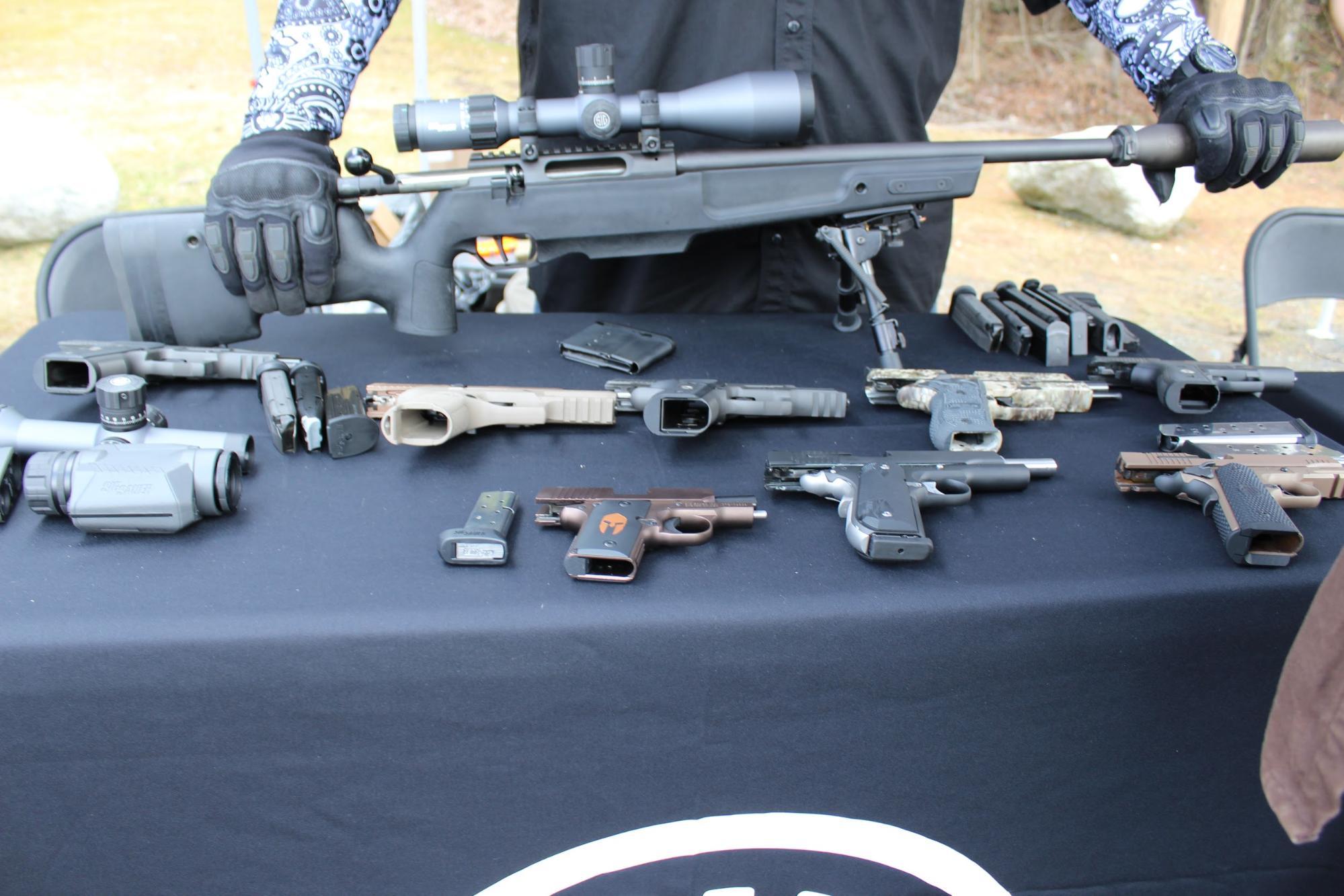 “People who protest military funerals or burn flags– there are things in this country that make my blood boil.  There is no justification, or need, for people to do those things,” he said.

“And people are right to say no one ‘needs’ an assault weapon.   But need does not dictate rights.  They are exercising their First Amendment rights, and this is the Second Amendment.”

Morovitz is from Boston, which he says has a high rate of firearms violations alongside some of the most restrictive gun laws in the country.  “The existing laws aren’t enforced,” he said.

Two U-32 alumni, Nate Singleton and Glen Rogers, both 21, had just fired one of Morovitz’ Sig Sauer assault rifles, the .300 Blackout.   “It looks like a machine gun.  It is a machine gun.  And it’s suppressed, so all you can hear is the clicking basically,” Singleton said.

Rogers said they were there just for fun, to try guns they could never afford. “For fifteen or twenty bucks you can shoot some two- or three-thousand dollar guns,” he said.

Both Singleton and Rogers grew up with guns in their family traditions. Singleton grew up deer hunting and Rogers had a twenty-two rifle around the house and started target shooting at ten or twelve years old.

Singleton said his mother, Dot, who recently retired from a career as a cook in the U-32 cafeteria, feels differently from him about guns.  “She hates assault rifles,” he said. “If some of my mom’s friend’s knew I was here they probably wouldn’t talk to me again.”

Singleton offered his own assessment of America’s gun laws.

“I believe there should be stricter regulations,” he said.  “I bought my first handgun last summer.  I walked in and I was out with a new gun in ten minutes.  It’s a very easy process.”

“You know, with all the shootings, it’s assault rifles that got in the wrong hands.  So that’s why I say it should be a little harder to get.”

“I don’t think there’s any easy answer,” Rogers said. “It depends on the type of gun.  If it’s a bolt action rifle, it should be more lenient maybe.  But if you want an assault rifle that bad, you should be willing to go through three or four checks.” 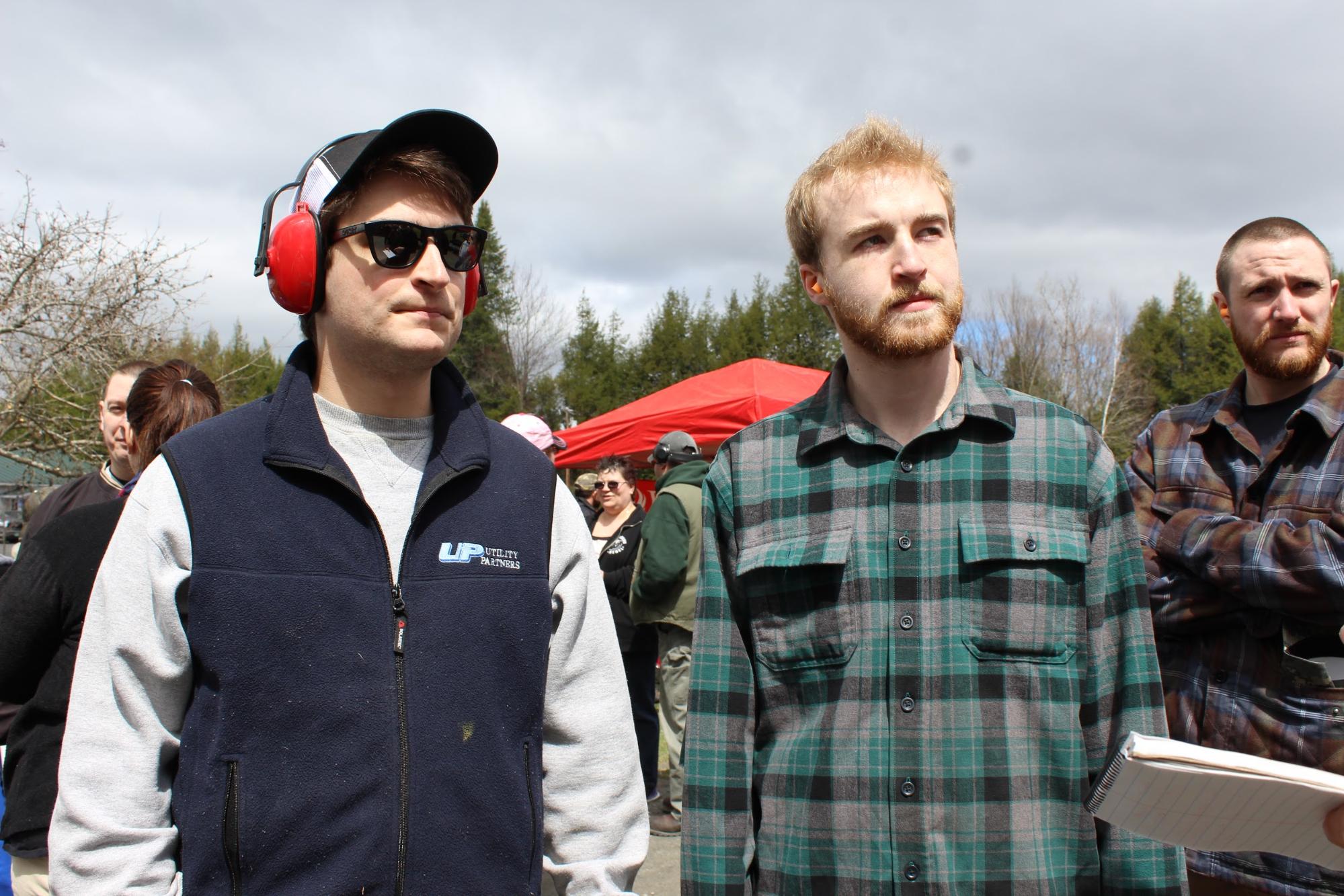 As Singleton and Rogers moved ahead in line to try another Sig Sauer rifle, Jason Law stood to the side, waiting for his sixteen-year old daughter, who was about to shoot.

Law said the Second Amendment was designed as assurance against the government possessing weapons beyond those available to citizens, and that new weapons technology had destroyed the balance of power.

“They have tanks, they have fully automatic weapons, and we’re not allowed to have those,” he said.  “It’s so we can’t rebel.”

Law said the passions on his side of the gun debate come from perceived threats to family traditions: “When they go after your heritage, that’s when people get ornery.”

These libertarian views were easy to find at Range Day, but Law, like several of the other attendees, also had some respect for Vermont’s progressive senator, Bernie Sanders, whose position defending gun rights has become a major issue in the Democratic campaign.

“You take Trump, and you take Sanders, and put them together, you get one good president,” Law said.

“You take Bernie’s ideas and give him the backbone Trump has, then you see a better standout person.”

Law’s politics, like this group of Vermont “firearms enthusiasts” as a whole, defy the stereotype.