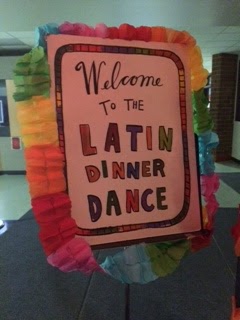 “The students who volunteer their time for setup and cleanup all get a percentage of the proceeds,” said Anne Decker, U-32’s strings teacher. “The rest of the profit generally goes to scholarships for music festivals,”  such as the Winooski Valley Music Festival.

Sarah Wolf, Anne Decker, Roger Grow, and Lloyd Dugger were the four adults who organized the dance.  The NECI Culinary institute located in Montpelier volunteered to help make the latin-themed food for the dinner. “All of the food was supplied for the dinner by the students themselves,” Roger Grow said. “NECI was just there to guide and help.”

NECI representatives weren’t the only volunteers, though.  Anne Decker said, “The organization of the dance I think was better than any year that I’ve been a part of, in terms of the efficiency of people signing up to help.”

Anne said that attendance for the dinner and dance was not as good as most years. “We were somewhat disappointed in the turnout; it was not as busy as we would have liked. For example, last year we sold out and this year we didn’t even come close.”

Even though the turnout wasn’t the best, parents still left smiling, proud of their kids.

Scott Hawkins, the father of a student in the jazz band, said “I couldn’t be more proud of my son. Performing in front of groups can’t be easy.”

The event has taken place for so many years that Anne can’t even remember when the idea started. “Tom Cate was the band director before Lloyd and it originally started as a Jazz band only event for many years.”

Anne gave a special shout out to Sarah Wolf for being such a great support, and she hopes for good turnouts in the years to come.