Alternatives, Part I: The Initiative 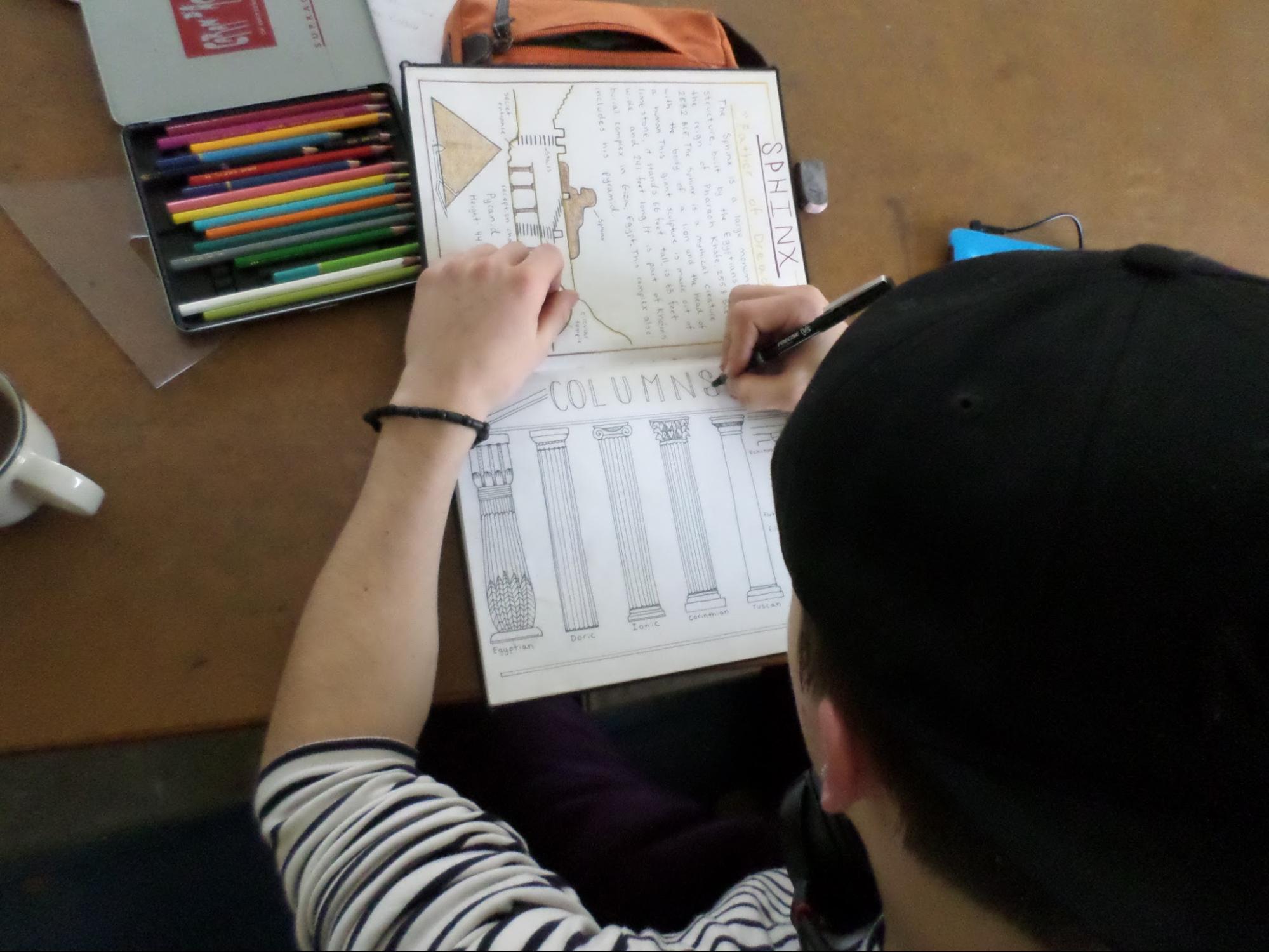 Josiah Gilbert (above) is making his own architecture textbook. And it really is his own; he’s working on filling it with the notes he’s taken during class, and is including vivid artistic representations of various structures, like the columns he’s working on above. No outline, no pre-printed pages. But this isn’t just one class project; Josiah makes a textbook for every Main Lesson, and in one semester, he could make up to 4 textbooks. And all this is a part of the curriculum at the exception high school Josiah attends; The Initiative.

Rudolf Steiner was a respected scholar and a well-known cultural personality during the late 1800’s and early 1900’s, till his death in 1925. His revolutionary ideas about freedom of culture, equality in politics and legislation, and “a globally oriented brotherhood in the sphere of equality” led to his founding of the first free Waldorf school in the German city of Stuttgart, a style of education that has continued today. In Plainfield, Vermont, the Initiative is a Waldorf high school in the Rudolf Steiner tradition. 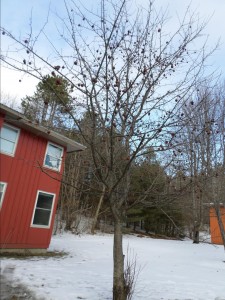 From the Initiative website: “Based on the ideas of Rudolf Steiner, we wish to create, nurture, and maintain a healthy, thriving and affordable secondary education program out of an anthroposophically based picture of the threefold human being (body, soul and spirit).” Anthoposophy was also created by Rudolf Steiner, and it is essentially taking a scientific approach to the study of the human soul.

I interviewed Rina Scherbastkoy, who attended the Initiative for her freshman, sophomore, and first semester of her junior year, about her experience at the Initiative. Rina explained that she transferred here because it was like, “a semester-not-so-abroad”; she’s taking a this time to see what public school is like, and to take other classes, like Acting, that aren’t offered at the Initiative. “There’s downsides and upsides to having a small school, but I definitely appreciate some of the upsides to having a small school, and it was such a tight-knit community. I also really like where it is; Goddard College campus is such a great campus: there’s forests and fields, [and] there’s a biodynamic garden we kind of took over.”

The Initiative opened in 2013, and their first class of Seniors is graduating this year, a total of 8 students. Rina, whose own class numbered 6 before she left, said with a laugh, “We were able to do a lot more things … you can go on a lot more extravagant class trips when you only have 3 people going.”

On Wednesday, the 27th, Rina gave me a tour around the Initiative’s campus, where her mother, Meg Scherbatskoy, works as a teacher. The Initiative is housed mainly in the small red Stokes Building on the edge of Goddard College’s campus. I sat in on the last part of Robert McKay’s Economics class, which took place around a large table. The students either sat at the table, or in the window seat just beside the table, taking notes and doodling as Mr. McKay lectured.

My first impression of the class was the closeness and community between students and teachers. There was no shame given or felt when a question was asked by a student, and they all listened attentively, besides the occasional good-natured comment or joke. And yet, this also further proved how comfortable everyone felt with each other. 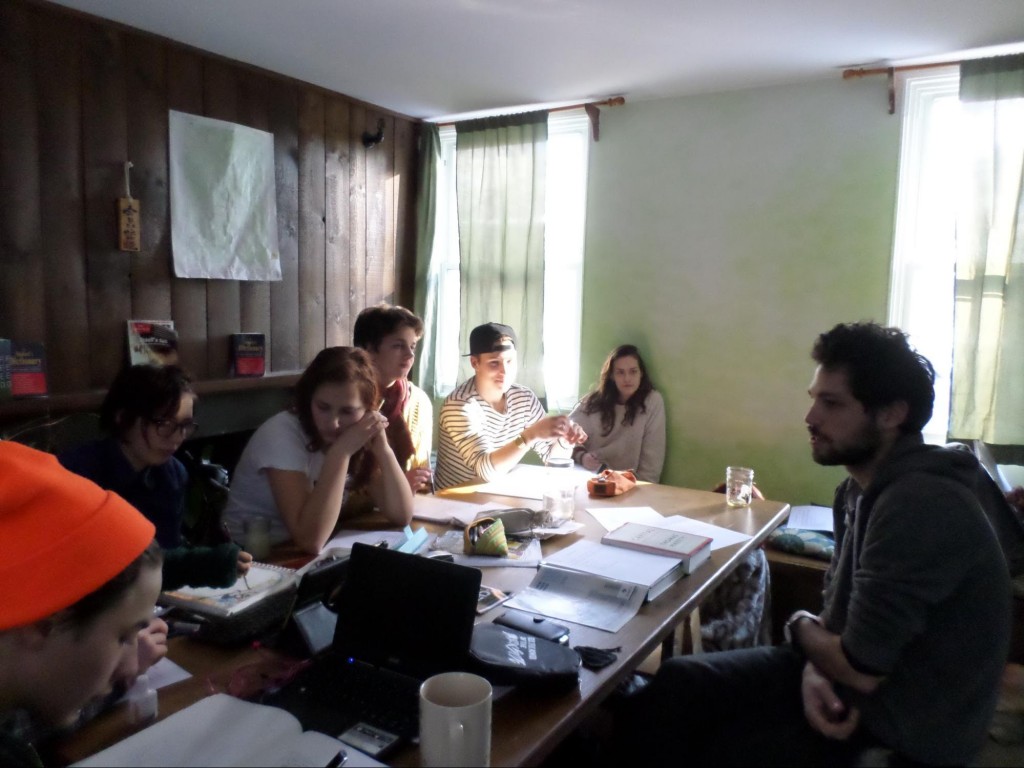 When I asked Rina about her favorite class, she replied that one of her favorites was Myth to Literature, a history of literature. “[We studied] the aspects of it, from myth, fables, oral history, up to our classical literature and modern times, and we also looked at what makes a fairy tale, the difference between a fable, parable, a fairy tale… connecting and comparing them, and how they relate to life. It was really interesting.”

Rina also explained that Initiative classes aren’t a semester long like most public schools are. the classes are done in 3-4 week blocks, so naturally, they learn a lot of different subjects in one year. Rina described the daily schedule to me:

Rina and I walked down to the Pratt Library, the local public library on Goddard’s campus. We sat in the room that had been “taken over” by the Initiative; four unfinished murals hung on one wall, and a timeline of artistic styles and historical periods lined the opposite wall. The room itself was high ceilinged and wide, and mostly empty, with two folding tables and some chairs arranged on one side.

Next, we journeyed about the main campus, which is reminiscent of an old family estate; a grand stone staircase with stone ram heads and hourglass pillars ornamenting it; a beautiful low-hedge maze encased in a low stone wall; and the old Goddard house, which was the home of the original Goddard family before this area became a college. 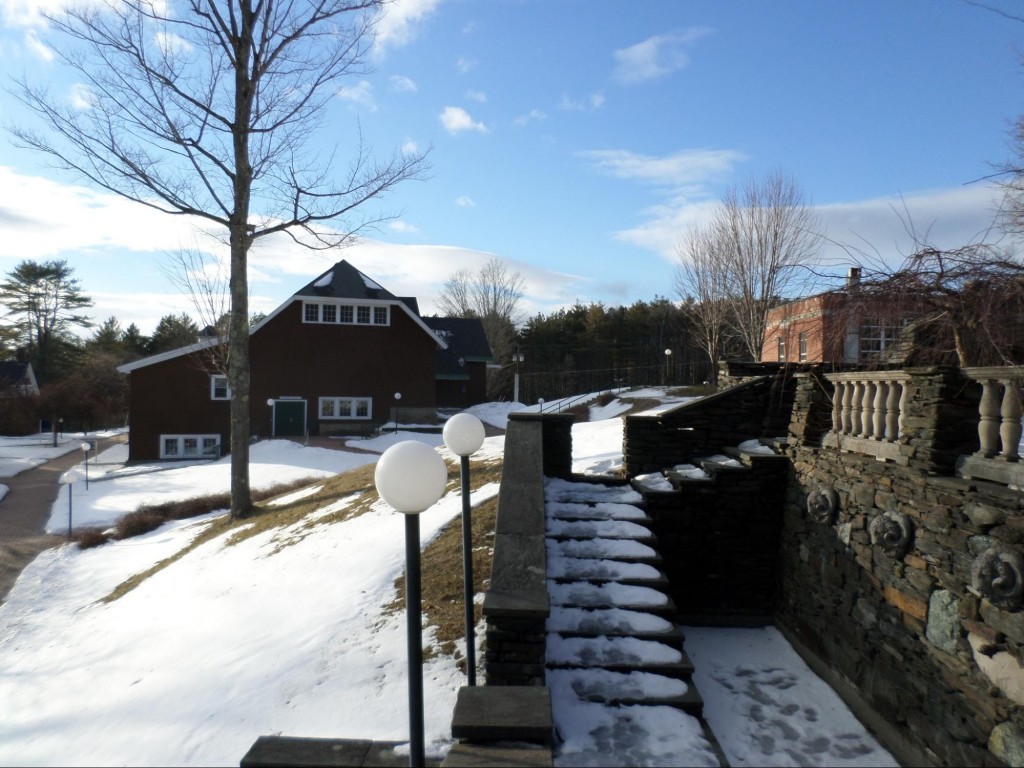 Staircase on the main campus. In the far back is the Haybarn Theater

While at the Stokes Building, I got a chance to speak with Aidan Gongloff-Piche, who was a former student of U-32, and current Initiative student. When I asked him about his favorite part of being at the Initiative, and he replied, “The freedom that we have in our work, and just in general. When it comes to assignments, as long as you talk to a teacher about what you want to do, there is usually a way you can do it that best suits you. In some cases there’s a very concrete idea, which is good for a lot of assignments, but it’s very flexible. The teachers here are willing to help you in any way that you need with your learning style.”

When I  asked Aidan what it was about the Waldorf school system that attracted him to it, he said “Here, everyone wants you to excel as you are.”