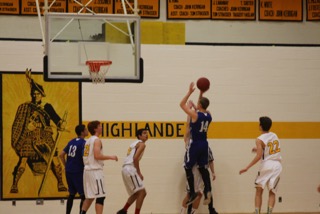 In the battle between the U-32 Raiders and the Harwood Highlanders, U-32 came out on top once again, despite struggling with missed shots and bad giveaways in the first 3 quarters. With a final score of 58-52 the Raiders barely squeaked out the last-minute win.

When asked what changed in the 4th quarter, U-32 senior Dashiell Vermilya said, “our aggression and intensity picked up, along with Jackson McCoy and Kyle Booth both being reawakened and scoring major points keeping the game close.”

U-32 senior Jackson McCoy scored a total of 24-points, while U-32 junior Kyle Booth scored one 3-pointer and six 2-pointers for a total of 15-points. Together they scored 39 of the Raiders 58 points.

The Raiders are now 11-2, and are on a 8 game winning streak. They sit atop the DII table. 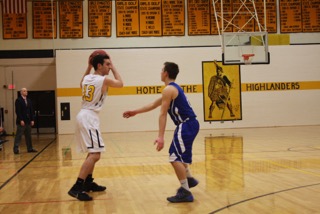 In the 4th quarter, Jackson McCoy and Kyle Booth came alive, together scoring 19 of their 39 combined points. With 1 minute 23 seconds left on the clock, U-32’s Kyle Booth tied it up 50-50. Jackson McCoy had a big rebound and finished a layup to take the lead for the first time. Then, Harwood tied it up 52-52. With 25 seconds left, U-32 senior Dashiell Vermilya hit a shot to score 2 points and take the lead, 54-52. The Highlanders panicked and had no answer for the Raiders. The Highlanders gave up 4 successive fouls to Dashiell, Jackson, sophomore Ford Porter, and again to Jackson; who each converted 1 of their free throws. When the final buzzer sounded, the Raiders had won, 58-52!

When asked how far he thought his team could go this year, U-32 senior Derek Cote replied, “I think we can go all the way, we have Jackson who is one of the best players in the state and an extremely good team that is surrounding a very good player.” On Monday the 25th, the Raiders traveled to Oxbow and won handily.