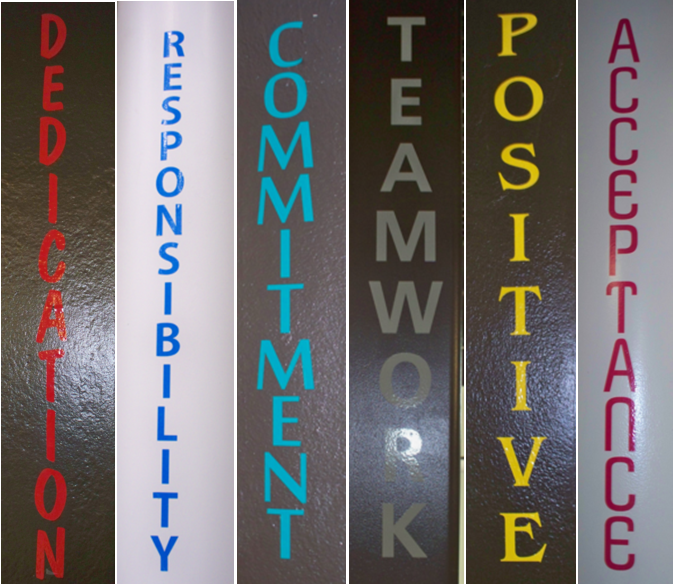 After just one semester,  the results are conclusive: the slogans painted on metal poles around the school have had their intended effects.  Class cuts, acts of insubordination and planning room visits among high school students have all fallen by more than fifty percent compared with last year.

Glenn Houston, in the Social Studies department, described the changes in more positive terms: “this is the most docile, compliant, unquestioning student body I can remember.”  And students agree.   “Sometimes my videos stutter, because of the WiFi issues,” said one young man reclining in the Senior Lounge, “but other than that, it’s all good.”

Between the statistical evidence and ground-level observations, the impact of the pole slogans is well established, but few students or faculty know their origins: last summer U-32 participated in a cultural exchange, bringing a consultant on school climate and culture, Mr. Lee Penh,  all the way from North Korea.

As chair of the Committee for Global Truthfulness, Mr. Penh has been tasked by his country’s president, Kim Jong- un, with “…enforcing a positive, can-do attitude, not just in North Korea, but around the world,” and is one of the first government officials from the “hermit kingdom” to be permitted outside the country. 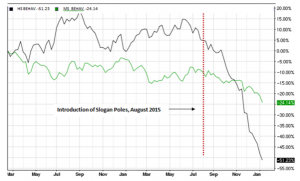 Data compilation clearly demonstrates a sharp decline in misbehavior among high school students this year, and a smaller, though statistically significant decline in the middle school. The difference, according to Mr. Penh, relates to what he calls the “topography of submission”: most of the poles are upstairs, where most potential deviants spend their time. Chat courtesy NECAP corp.

Mr. Penh said that most Americans “…fail to understand the power of subliminal messaging in subduing the population…” but he saw “…a lot of untapped potential for positive thinking and teamwork at  U-32.”  Mr. Penh added some security cameras to provide “…live feeds back to the Father of the Nation…” and made changes to the school’s intercom, which was playing barely-audible messages during quarter one, until DJ Duct began his internship.

Not every element of Penh’s strategy proved practical, however.  His proposed equestrian statue of Principal Dellinger-Pate, for example, was too large for installation in the school’s atrium.   Mr. Penh’s engineers tried separating the bronze Dellinger-Pate from the rearing horse, installing Dellinger-Pate on the pedestal alone; however, according to Mr. Dellinger-Pate, “… it was ridiculous.  My legs were weirdly bowed and they put a rifle and flag in the hands that had been holding the reins…. it just wasn’t a good fit for U-32.”

Indeed, it seems clear our principal wasn’t entirely on board with every element of the North Korean strategy.  When Mr. Penh left after his month’s stay, Mr Dellinger Pate removed several oversized portraits of himself from the gym and had the bronze statue, briefly installed on the middle school roof, melted down for use in the school’s Chromebook program.

The poles themselves, formerly part of a large security fence on the border between North Korea and China, are one element of a gradual move away from U-32’s “Core Values And Beliefs,” laminated and posted in every classroom some years ago, after a visit from Gurbanguly Berdymukhamedov, president of Turkmenistan.