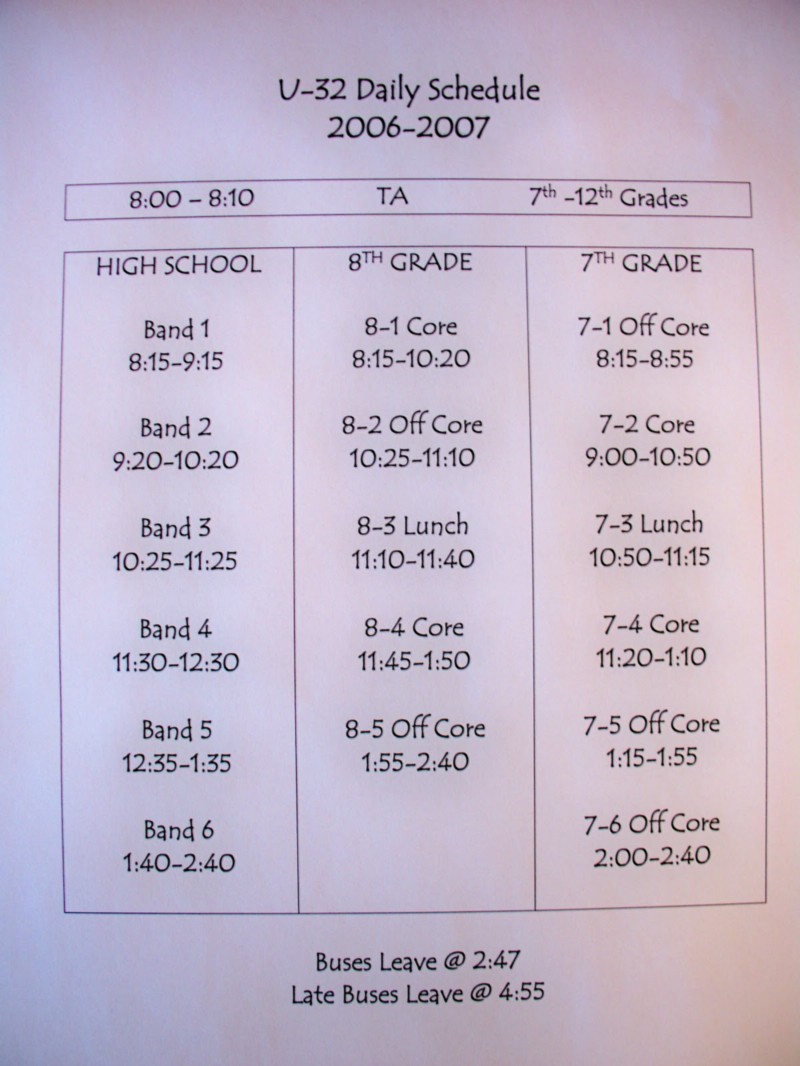 U-32 has experienced a variety of changes in schedules. Cathy Topping, one of U-32’s veteran teachers, talks about the history of schedule changes she’s witnessed while working here. “When I first came to U-32, we had a nine band day, and the first few bands of the day were on a rotating schedule, which I hated because nobody could ever remember what rotation we were on. So they got rid of that, thank god, and we just had a solid nine band day, classes each 40 minutes long.”

The school board settled on this schedule for many years, but soon teachers started demanding longer class bands. “It was incredibly difficult to fit in all of the things we needed to cover in just 40 minutes,” Cathy insisted. She explained that “students struggled having 9 classes to do homework in every night.”

The school board then decided to switch over to a trimester schedule. Mark Chaplin, another historic teacher here at U-32, explained how this schedule worked. He reported that “the idea behind the trimester schedule was that you would meet everyday, but only for two-thirds of the year…. For example, a student might have math class for the first two thirds of the year, and they would have math class everyday for the first two trimesters. But in the third trimester, they wouldn’t have math class at all. So classes didn’t take up an entire year.” 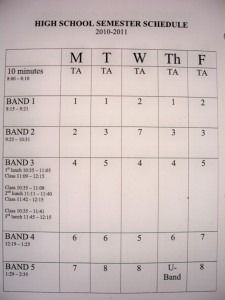 The first schedule when U-32 moved to semesters. Many found this schedule confusing.

Cathy Topping really enjoyed the trimester schedule. “For all of us, it really felt like school was manageable, because you didn’t have so many classes all at once; we only had four classes. It just made life so much more pleasant because the homework load wasn’t so bad, and we always had daily contact.”

Although the trimesters worked for some, not everyone agreed with the set up. “The downside to this was that there were some classes, let’s say French for example, that didn’t meet for a whole year at time,” Mark explained.

The school eventually got rid of the trimester schedule and moved onto a semester schedule with five classes a day. “I think the worst schedule I ever worked under was this schedule because the bands just jumped all around during the week, and I know I never mastered the schedule. I always was at a loss for where I had to be, and the entire thing was just chaotic,” Sarah Volinsky said. After complaints about the hectic schedule, the school moved to the one we currently have now.

Overall, many teachers who have experienced U-32’s schedule history seem to agree that, even with it’s downsides, the trimester schedule was the best. Students had a more reasonable course load, so they weren’t always so stressed. Mark reasoned that “the drawback, in my mind, to this schedule compared to the trimester is that kids are back to having to juggle seven or eight classes, and so they’re pulled in a lot of different directions. It’s hard to know how much time to focus on any one thing…. It’s like the kids never get a day off.”

The daily schedule under the old trimester system. 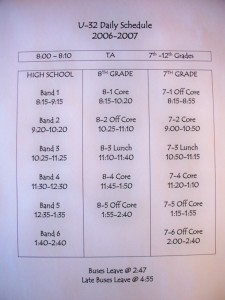 Cathy agreed. She said, “they took the best thing away from the trimester, which was the ability to focus on, at most, four classes.”

Christiana Martin, a year long substitute for John Antonucci, compared our current schedule with some of the other schools she’s worked in. “At MMU, they had twenty minutes for T.A. about three times a week, which I thought was really great because there was a lot more time to do activities where students could have a lot of important bonding time with each other. It’s a little disappointing that U-32 doesn’t set as much time aside for that.”

Although she wishes there was more downtime for students, there are some positive things she really enjoys about U-32. “I will say the nice thing about here compared to MMU is that they don’t divide a class in two for a lunch break. At MMU they used to have students stop in the middle of class, go to lunch, and then come back.”

Good thing we got rid of that routine before Christiana got here. U-32 used to have high schoolers take lunch breaks in the middle of one class, but our current schedule no longer allows for that.

The schedule seems to be forever shifting to find the perfect balance that works for everyone. However, “there is no perfect schedule,” Cathy concluded. The key is to pull the best things from each past schedule, and then try to fit them into one.