The Government Takes Over The Cafeteria: What Are The Changes? 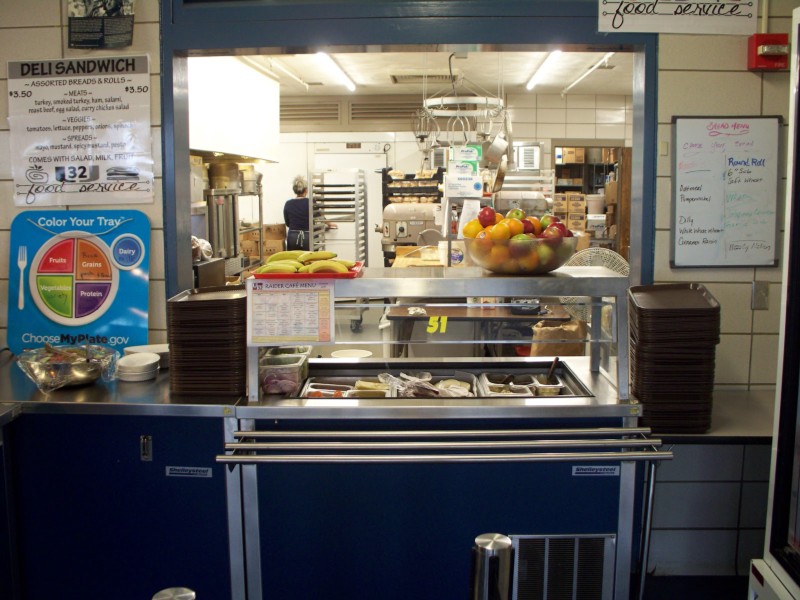 The school cafeteria has experienced changes this year as a result of the stricter USDA regulations, which limits what kinds of foods and proportions can be served to middle schoolers and high schoolers. Rick Hungerford, manager for the school cafeteria business, discussed some of the specific differences he’s seen this year. “The list goes on and on. There are now some really strict limits on every food group; protein, grains, fruits, vegetables….there had never been such a big push for giving the right quantities to kids. We used to just make what we thought kids would buy, and then sold it without having to analyze what the nutritional value of our meals was.” 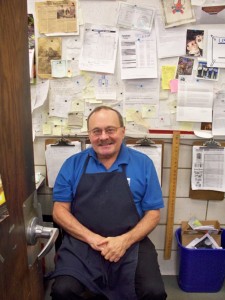 Rick Hungerford, manager for the U-32 Cafeteria, in his office.

Some of the food items the USDA told the cafeteria to stop selling this year include students’ favorites, like specific ice creams and chips. “I used to love eating a Choco-Taco after my lunch, but I can’t buy them anymore. The ice cream replacements aren’t bad this year, they just aren’t as good as they used to be,” exclaimed junior Ferron Pursell. “We can serve only ice cream that has a first ingredient of either fruit, or fresh milk, and the milk that’s used must be non-fat,” Rick explained. “That’s why it doesn’t taste as rich as usual, but if we want to have ice cream at all, that’s what we need to settle for.”

Aside from subtracting from our meals, the school is also required to add specific things as well. “Every meal we have to require students to take at least one fruit and vegetable so they can get their correct serving. We tried to make this easier for students, seeing that our share box is generally really full by the end of the day, by starting to make smoothies this year.” 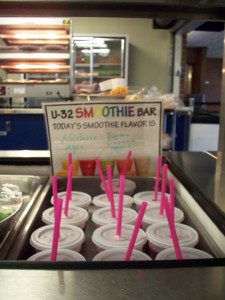 The new smoothies: seen by many as an upside to the recent menu changes.

The new USDA regulations aren’t all bad. The smoothies have been a big hit this year. A junior, Helen Bohn, said, “I honestly think the smoothies are better than the ice creams. I get one almost every morning for breakfast.”

There are a lot of other food groups besides fruits and vegetables that the school cafeteria must monitor in students meals. Rick explained that “in a week’s time, there is a certain amount of nutrients, coming from each food group, that we have to make sure is available to kids. The amounts we serve vary depending on whether we are serving the high schoolers during lunch A and C, or the middle schoolers in lunch B, but the overall idea is that everyone gets the nutrients they need…. We can have one day, take pasta days for example, where we can have more whole grains than protein, but then later on in the week, we need to make sure to have a meal rich in protein to make up for what we missed on pasta day.”

There has definitely been an adjustment to the school’s menu, but luckily, there are some things the school hasn’t had to give up. Rick explained: “we still have a lot of the local breads we served last year. Lucky for us, the companies were good enough to re-formulate their ingredients so that we can still legally serve it. For example, our Red Hen Bakery bread; It’s the same bread they serve at Sarducci’s, except that for us, they put more whole grains in, which was really nice of them to do.”

The school has also been able to hold onto some of it’s traditionally sold chips and drinks by working around the USDA regulations. “We can put snacks that aren’t permitted to be sold in our cafeteria into the vending machines, so that students can still have some of their favorites available to them….there’s no rule that says we can’t sell them after school when those machines turn on.”

These changes are the results of the health care initiative that Michelle Obama championed. Rick explained that “these changes have been happening since Obama was first put in as president, it’s just taken the USDA a while to catch up to Mrs. Obama’s requirements, and then it took us awhile. That’s why the changes are so extreme this year compared to last.”