Everyday Chemistry: Batteries In Your Phone 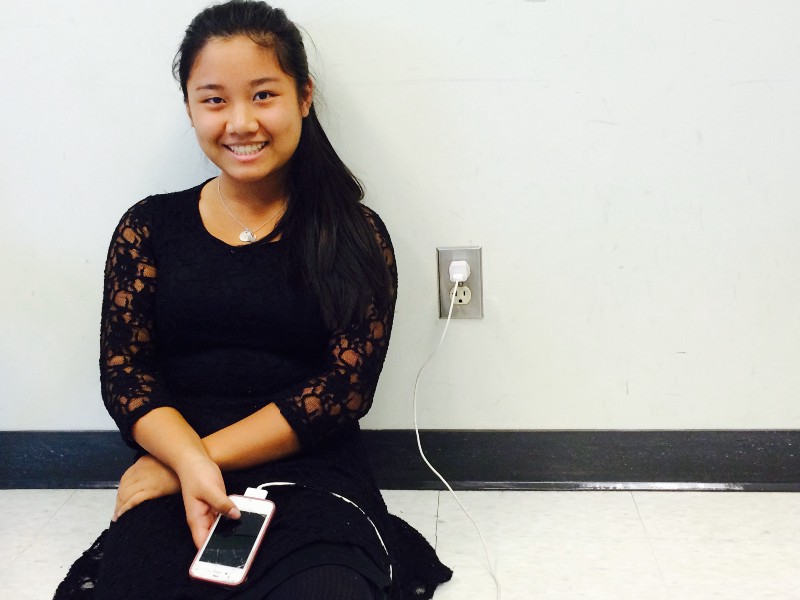 I asked around seeing what people think is going on when they charge their phone batteries. Logan Blake had no idea: “It generates electricity inside the battery…???”

Mary Bashaw at White Table admits to knowing very little indeed: “Haven’t a clue….. I plug something into the butt end of the phone and it charges, it doesn’t hold a charge very long though… little electrical thingies go somewhere.”

As descriptive as Mary’s explanation is, it isn’t close to reality. During charging, lithium ions (the blue circles in the diagram below) flow from the positive electrode to the negative electrode through the electrolyte/separator. 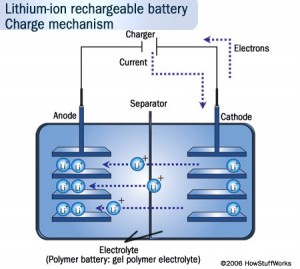 When no more ions will flow, the battery is fully charged and ready to use.

The chemical reaction moves the electron, which then becomes electrical energy. When all the ions have moved back, the battery is fully discharged and needs charging up again.

Developed in the early 1800s by Alessandro Volta, the Voltaic Pile, was the first battery which continuously provided electrical current to a circuit. The Voltaic Pile consisted of pairs of copper and zinc discs piled on top of each other, separated by a layer of cloth or cardboard soaked in brine. This battery produced a continuous and stable current and lost little charge over time when not in use. Although Volta’s early models could not produce a voltage strong enough to produce sparks, he experimented with various metals and found that zinc and silver gave the best results. 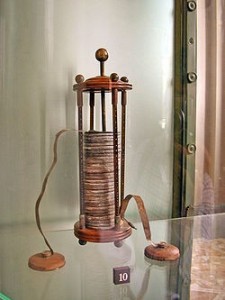 A model of Volta’s early battery.

Randy Brown, the physics guru, explained “The pump is the best analogy to represent a battery, a battery is an electron pump.” A pump is like a battery because both of them transfer water or electricity to another place. In just a few hundred years the battery has changed your life by supplying you with a portable power source.