Buzz-In System: Worth the Hassle? 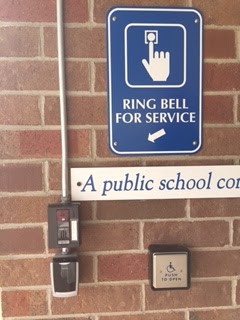 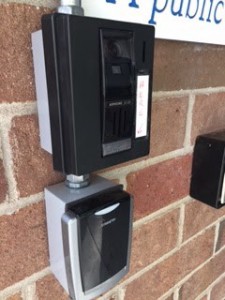 At the beginning of the year we were all told about the new security system installed over the summer. There were two big changes: the new security cameras and the new buzz-in system for the front door.
Nobody has had to use the buzz-in system yet, and many people have been wondering if we are going to use it at all. Many students agree with Senior Chloe Sairs, who said, “I think it’s more of a nuisance than anything.”

Teachers and students have had a lot of concerns about the new security system, but Principal Steven Dellinger-Pate said, “It’s really just a lock system; it’s nothing fancy. The new system for the front doors, and any of the doors on the outside of the building are really just controlled by electronic locks instead of key locks. The system is buzzer activated, and there is a camera out there so we can see who is buzzing in before we let them in.”

Students have expressed concerns about how they will be able to get in and out of the building during the day. Senior Amber Rich said, “During lunch times there are going to be a lot of people going in and out of the school and it’s going to be hard for everyone to come back inside.” The administration hopes that when people go outside for lunch they will all come back in together to avoid some of the hassle.

Many students have also had concerns because they don’t know how the system works, and they haven’t been told how to use it. In the picture to the right you can see that it looks confusing. The black box on top has a camera, with a clear button you push to get in the building. The second black box on the bottom is where you swipe your card, if you have one, to get in the building.

Michael Horowitz, design and technology teacher, said, “I’m not saying that that is good or bad, but it definitely changes how it feels to come to school. I think it makes the school a little more secure because it’s a dissuasion for people who have in the past just walked right in the front door and started yelling because they wanted something. A lot of the time you don’t know if they are violent so I think it’s more effective.”

Many people don’t understand the need for the system. Steven said there are two main reasons: “the Agency of Education has recommendations about school security, one of them is that your front door is buzzer-activated so that people can’t just walk in and out during the day. And the second reason is that we haven’t rekeyed this building in a really long time and there are a lot of master keys around.”